They call it the "retreat" because of its charming privacy and apparent obscurity.
More...
May 31, 2022

She backed Harrison, and had to wheel Henry Singer in a barrow, at Atlantic City, N. J.

There is a strong minded woman “way deown in Maine,” who has been protesting for years against her sex being debarred the right of suffrage.

Done Up by Dizzy Blondes. | Threatening an Umpire. 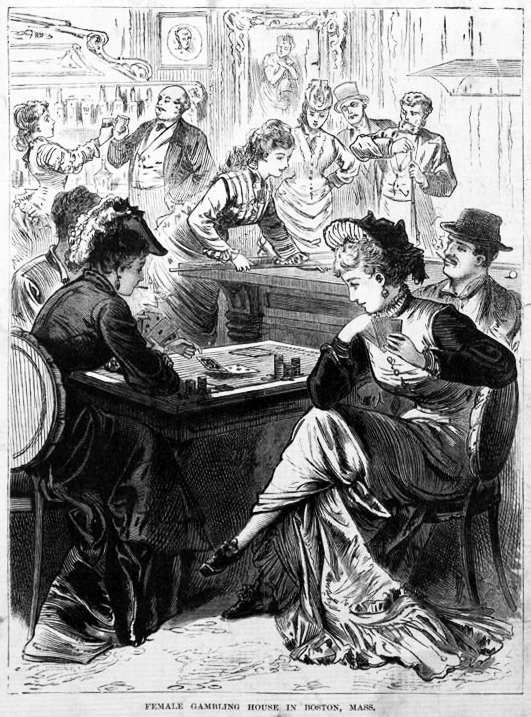 The existence of a female gambling house in Boston has been suspected by some,and known to a few favored ones for some time past—in fact, ever since the opening of the institution. At first it bloomed and flourished during the winter months at the reception department of two ladies whom we shall style Miss Mary Laudon and Mme. Burgoine. These two feminines passed for mother and daughter, and by their industry and modest deportment won their way into the family acquaintance of some of the best families in the city.

It was left to an occasional contributor of the NEWS to rediscover the retreat of these now notable females, and give an idea of the way in which fast girls and boys pass the nights, as some of them say, "out of town on business."

The secret leaked out through a colored girl, who was recently discharged for some irregularity, and imparted by her to another person, who visited the "retreat." They call it the "retreat" because of its charming privacy and apparent obscurity. It is on a street not far from the State-house. The front of the building would appear to the ordinary observer as a building unoccupied. The windows are darkened above, and were it not for the side-door, left open night and day, but which is seldom used, no one would suppose the upper part of the building occupied. But it is now discovered to be the popular place of resort, for various classes of people, who nightly assemble to play with and provoke Dame Fortune as represented by her most fascinating votaries. But let the last victim tell his own story:

"It was a strange sight —one that fairly astounded one at first glance. Here in a room gaudily but not richly decorated and brilliantly lighted, were assembled at least thirty men and women, three-fourths of whom were engaged in the fascination of games of chance, At one table sat the quondam seamstress, Miss Landon, attired in a loose, white lace wrapper, her fingers glittering with pearls. She was dealing faro for the amusement of a young merchant of Boston, and two women, both strangers to me. Four or five persons sat by the table, looking lazily on, smoking and sipping refreshments. At an adjoining table two men and two women were engaged in a game in which bright, new half-dollars passed for checks, and gold pieces occasionally passed current.

"One of the women, a 'girl of the period,' smoked her cigar with the nonchalance of an adept, while her neighbor on the right, a middle aged woman of means, kept a record of the game on paper. They appeared to be playing whist. At two small tables in the far corner of the room six or seven women, with one or two men, were interested in games of chance, apparently poker or euchre, and money appeared to be passing freely, but rather silently. Taking down a billiard-cue, we acceptedthe challenge of Mme. Burgoine, and engaged, with our friend and a girl who had just prepared to start for home, in a friendly game of billiards. These are a few of the observations made during a short visit to a retreat whose existence is unknown to even the business men in its vicinity."