The burning of the steamer John H. Hanna near Plaquemine, Louisiana, by which thirty lives were lost 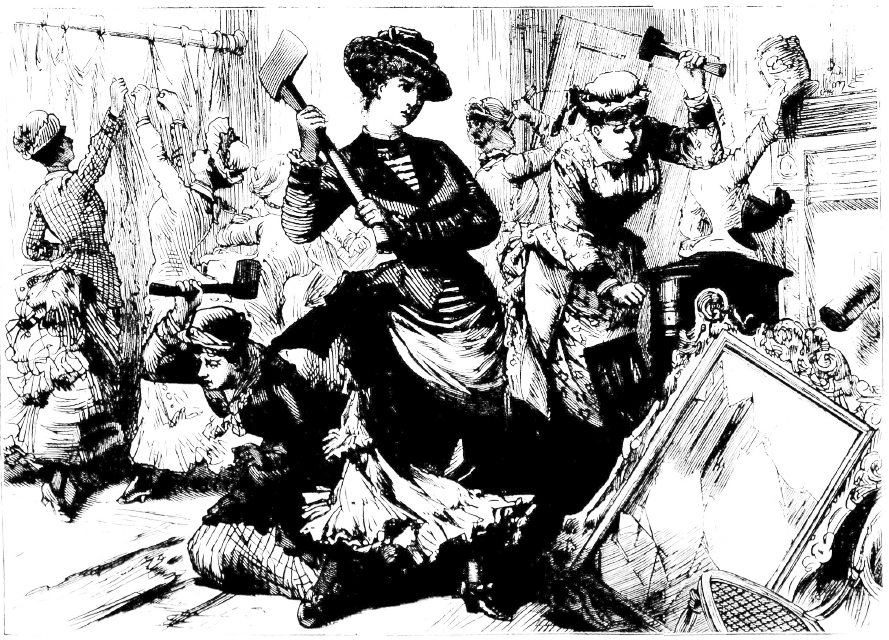 The White Hat of Lafayette, Ind., is burst up by a mob of women. [more]

A little before dark on the evening of Sept. 9, a crowd of indignant women, numbering about forty; reduced the bagnio of the notorious “White Hat,” on Sixteenth street, Lafayette, Ind., to a complete if not picturesque ruin. It was a quiet but determined vigilante committee, and they did their work well. White Hat’s dive has long gloried in the reputation of the hardest place in Lafayette. It was a free for all. Race, color or previous condition of servitude was no bar. It was a cross between an old woman’s home and a pest house, and a stench to the nostrils of the neighborhood. The place has long been under police surveillance, and on the night mentioned above it was raided. The male guests scaled the back fence and fled, but four women, including White Hat, were run in. Next morning they were given thirty days apiece in jail. This episode left the establishment, for the time being, tenantless.

At a little after 4 o’clock the women of the neighborhood began to congregate on an adjacent corner. The news that the ranch was to be demolished spread like wildfire, and the crowd soon numbered two score. When it reached these dimensions the onslaught was made. A few determined women led the van and the rest streamed after, over the front yard. The house is a double brick, and the dive proper was in the south side. Here attentions were directed.

One of the women had an axe. She was about forty-five years old, tall, strong, and when she brought the blade against the panels they went in with a crash. A few more blows sent the door of its hinges. Almost a dozen of the boldest rushed in and began to demolish the interior, while the timorous contented themselves in throwing stones on the outside.

For a few moments it sounded like a fusillade of artillery, and in that length of time there wasn’t a piece of glass the size of a half dollar in any window in the establishment. Meanwhile several other axes had been brought into play and all the window frames and door cases splintered. Even the floor did not escape and was badly backed, while big chunks of plastering were knocked bodily out of the ceiling.

In the course of the afternoon most of the effects of the White Hat outfit had been removed on a dray, so there were but few household goods for the crowd to wreak their vengeance on. A cooking stove was the most conspicuous object, and this was speedily reduced to junk iron. Their work of ruin occupied in all about half an hour and the crowd then quietly departed. They did not stop to talk the matter over, but went straight home, and the demoralized house was the sole evidence of what had occurred. The work was viewed by a large crowd of men but none offed to interfere. They knew better.

The end of the trouble was not, however, in the event described above. At 9:10 in the evening an alarm of fire came in and called the department to the vicinity. Flames were seen braking through the roof of the dismantled edifice and rapidly spreading along the woodwork. The fire was obviously the work in an incendiary, as there had been no fire about the premises during the day. A little brisk work soon extinguished the blaze with a big hole burst through the shingles and considerable damage to the interior. It will take quite an outlay of money to put the property in anything like a condition to rent again. The fire is generally accepted as a final notification to the outfit that their presence will be no longer tolerated in Linnwood. It was said on the ground that the parties who fired the house are well known and will use dynamite the next trip if it is occupied again by the same kind of cattle.