Prostitutes and their Paramours Go Bathing

Two of the Unfortunate Women Drowned

The following account of a very bad disaster, we copy from a recent Cairo (Ill.) paper:

At a late hour on Saturday night, Aug 31st, Frank Douglas, proprietress of the notorious house of ill-fame, known as the “Flat Top,” situated on Fifth street, between Washington and Commercial Avenue, and three of her “lady” boarders, named Fanny Williams, Mollie Jones and Alice Forche, accompanied by four men, started for the Kentucky shore in a small skiff, for the alleged purpose of bathing. The party made the trip in safety, reached the other shore, and remained there for perhaps two hours. At about 1 o’clock they started back to the city, and report has it, that either the bath or something else had an exhausting effect on the party, for they are reported as being rather noisy and careless in the management of the skiff. The boat was a small leaky concern, unfit for carrying over four or five persons, but the party of eight were crowded in, and because they were far from the Kentucky shore, commenced leaking badly, perhaps on account of the reckless manner in which they acted, rocking the boat from one side to the other. To add to the trouble, the bailing dish had either been lost or thrown overboard, and the boat was soon in a swamping condition. When they reached a point opposite the stone depot, the boat filled with water to the seats, went under, leaving the party scrambling in the water. Their screams attracted the attention of Mr. Robinson, mate of the steamer Alpha, who immediately went to the relief in a skiff. On reaching the party, he ordered the men away from the boat, and threatened to strike with the oar the first one who attempted to get in, until he reached the females. He succeeded in picking up Frank Douglas, Fannie Williams, and the four men. Mollie Jones and Alice Forche were drowned.

Mollie Jones had resided in Cairo since 1863. She was a married woman about thirty years old, and her husband, a contemptible wretch, forced her to enter on a life of prostitution, so that he might live a life of ease.

The unfortunate Alice Forche, has been in Cairo about six months. She is reported as being of a decidedly prepossessing appearance, intelligent and of a good family. She was sixteen years old and came from Paducah to this place. It is said that she was seduced by a well-known and “highly respectable" Paducahian who send her here to get rid of marrying her.

One of the men, when the boat went under and he found himself in the water, attempted to remove his pantaloons, in the pocket of which was his pocketbook containing a considerable amount of money, and a fine gold watch. He had partly succeeded in doing so when one of the drowning females caught him and in the endeavor to save himself, lost his pantaloons, watch and money. 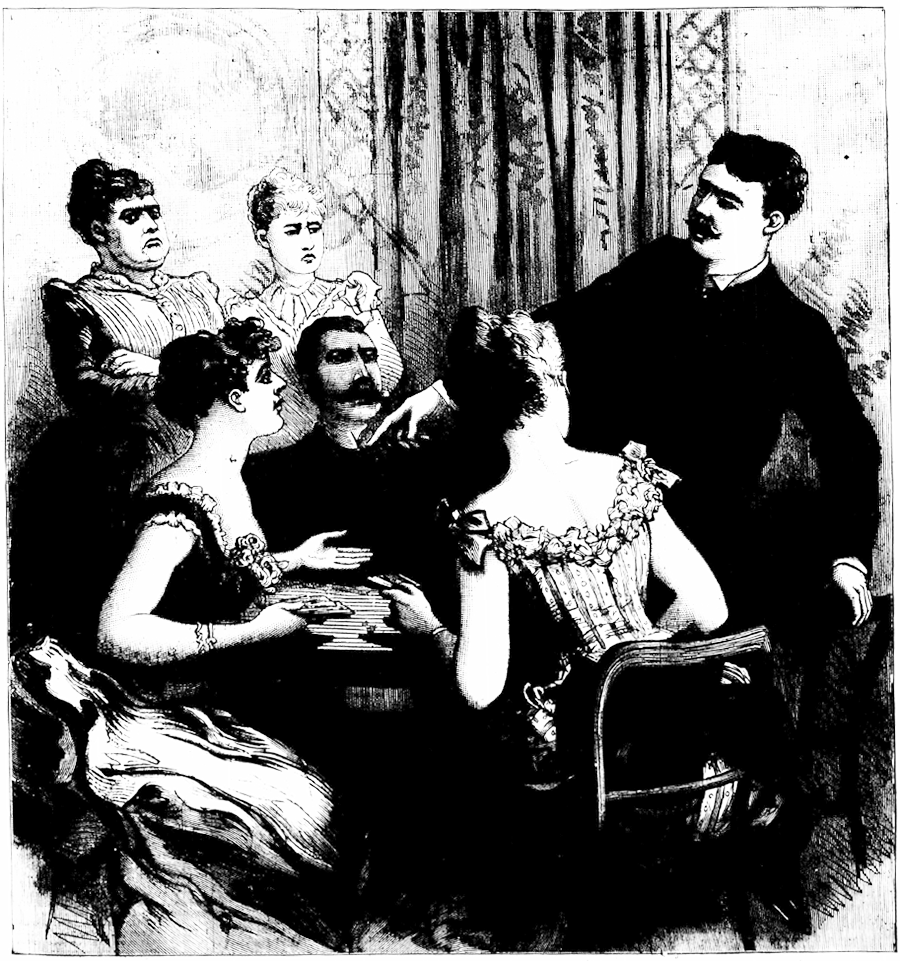 A “friendly” poker scheme exposed at Bogota, N. J., by one of the players squealing.

Some months ago there moved into a neat cottage at Bogota, N. J., on the east side of the Hackensack River, opposite Hackensack, N. J., a family who introduced themselves as the Larkins.

When Mrs. Larkins and her daughters, Julie, Clytie and Bell, first settled in Bogota the were regular in their attendance upon worship in the "old church on the green,” where their presence was at once remarked, and they were classed as inhabitants of ultra sweldom by the staid Dutch worshippers, who cling to the belief of their forefathers that gaudy colors and silks and satins are an abomination. But it has just leaked out that Mrs. Larkins has been running a little game of draw in her quiet little cottage.

It now appears that “Mrs. Larkins: and her “family” were reaping a rich reward from the visitors among whom were at least three well-known local poker experts, who are known to have been regular in their visits Saturday nights. The handsome “father” of the house is said to have been a professional gambler, who plucked the larger game, while the callow youth were left to the fair but expert misses.

Under such circumstances it would be impossible to say how long the pleasures of the place might have been enjoyed had it not been for the rashness of one young man, who, while presumably headed with wine, imagined that the fair Clytie held one card too many at a moment when the inducement was a jackpot of generous amount. Clytie smilingly protested her innocence, but the youth lost his temper, and so far forgot himself as to impeach her veracity in a word of four letter preceded by a powerful adjective. When a constable wen with a warrant to pull the house he found in large black letters “To Let” on the door.