Benjamin, of that name, vainly attempts to break a bank in female disguise at Palmerston, Ontario.

A Cincinnati girl parades the streets in male attire and is yanked in for her temerity and immodesty. 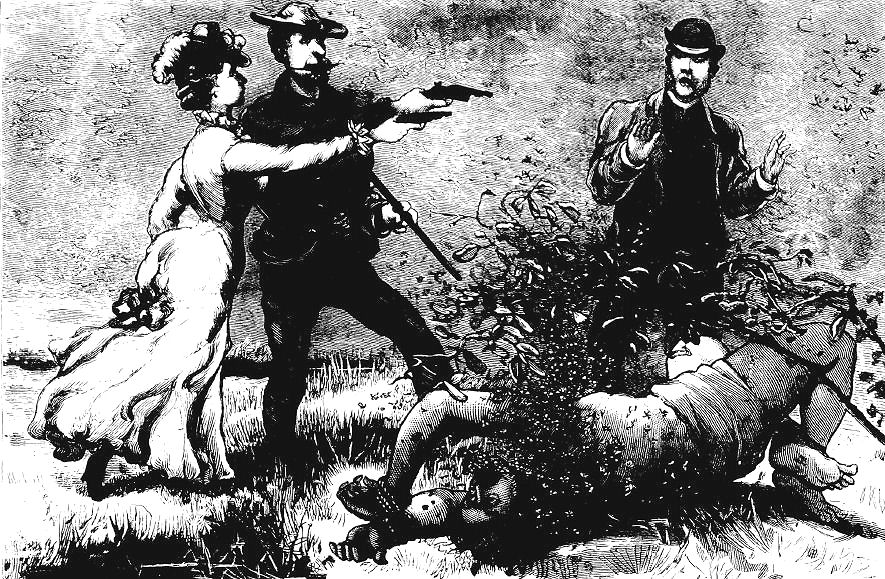 Louisiana, Sept. 1882 - A masher who fools a Louisiana girl is tied hand and foot, smeared with molasses and laid in the sun to be tortured by flies until he consents to marry.[more]

A Young Masher Fools a Girl in Louisiana and is Taken into Camp.

A young couple arrived in New Orleans on the 20th ult. Who excited some remark.  They were a bride and bridegroom. He was wrapped in bandages, limped and groaned at every motion as if he had been put through a threshing machine and was sore in every joint. She stuck close to him and watched him as a cat does a mouse. He could not make a move but that she was on his heels ready to pounce on him should he attempt to make his escape.

Several attempts were made to interview the young man but they were only partly successful, owing to the watchfulness of the catlike bride. It was ascertained however that he was a drummer for a New York house who had in his journeying through Louisiana scraped an acquaintance with the young woman. He had used all his metropolitan fascinations to such good purpose that she was in the worst sort of predicament. Her pap insisted that the young fellow should marry the girl but he respectfully declined and harnessing up his horse prepared to leave. The old man was no chump, though. He seized on that city chap and with the aid of the girl bound him hand and foot. Then they soused him in a hogshead of molasses and laid him out in the sun for the flies to settle on and torture until he made up his mind to wed. After the old man had secured a parson who lived a few miles away, he and his daughter, armed to the teeth, sat down and covering the dominie with their pistols waited until the young lady’s intended should weaken. He was covered with a swarm of insects who tortured him sore. His struggles and shrieks of agony had no effect on the determined father-in-law and he prospective bride, however. They silenced the parson’s protests and were deaf to the cries of their victim.

At last after enduring a great agony he gave in. The flies were brushed off and just as he was he was wed. Then they washed and dressed him and he insisted on starting for New York at once. His bride went with him for her wedding tour. He threatened to drown her if he recovered the use of his limbs on board the steamer, bug from his “all broke up” appearance there seemed little chance of getting square for two or three months, if ever.

From The National Police Gazette, October 21, 1882