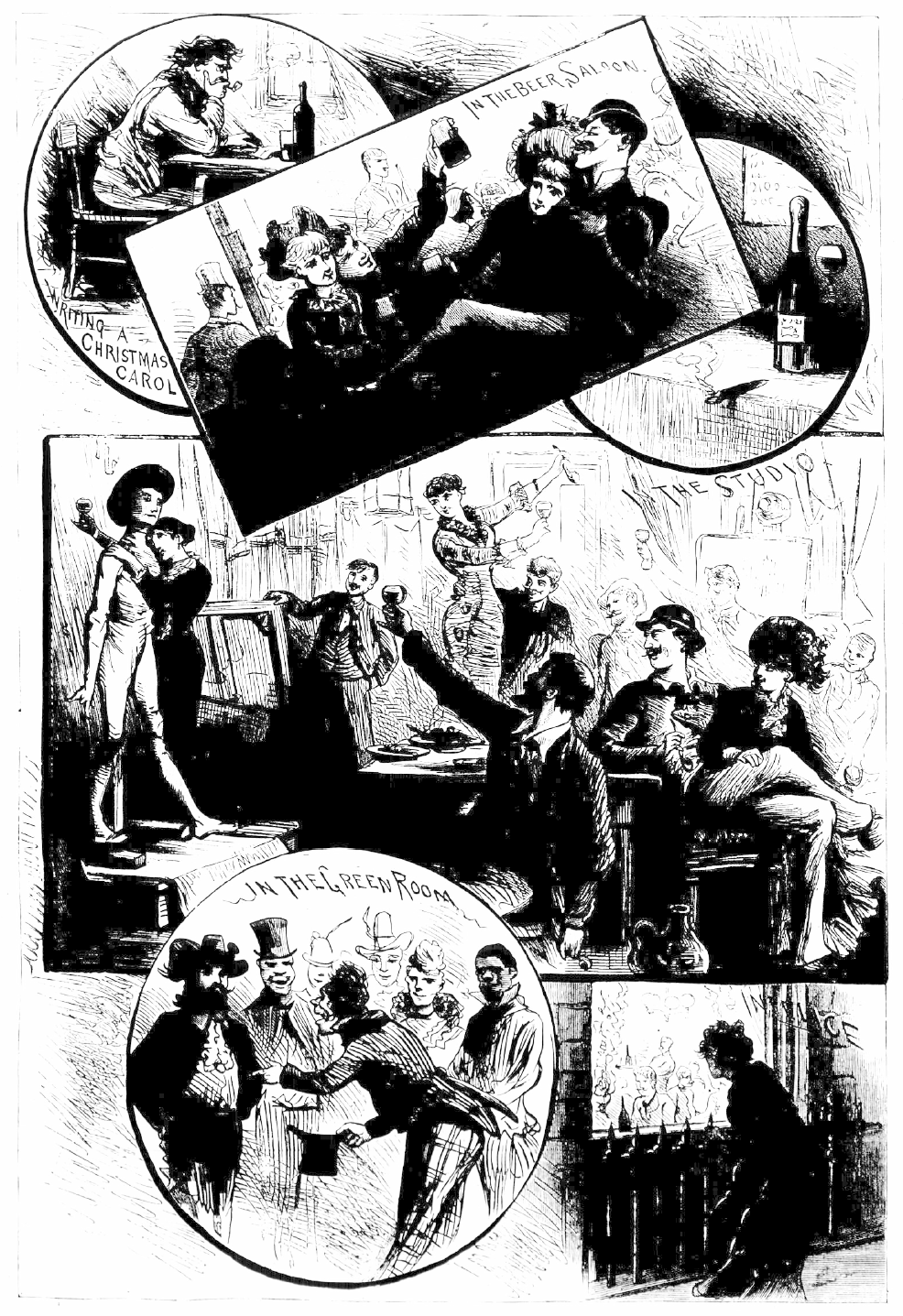 Celebrations of the annual festival in which comfort and fun replace fashion and ceremony, and those who enjoy to-day leave to-morrow to take care of itself.

The Revels of Genius in its Gay World Within a World.

There are a good many ways of celebrating Christmas and the world makes use of all of them. But from first to last there is no jollier way than the one which Bohemia enjoys Christianity’s great holiday.

There are grander ways, to be sure. The stately pageant with which royalty commemorates it, for instance, with thunder of guns and blare of trumpets; with the flash of jewels, the shimmer of imperial purple and discussion of a banquets under the shadows of flapping banners to the music of a court band. The church, too, has its special celebration, perfumed with the incense of sacrifice, and society does the occasion honor after its on stately and ceremonious fashion. But these are the hollowest of mockeries after all; ghost of that real, healthful enjoyment of a holiday which all the wealth of the world can not buy without the spirit of content to back it.

That enjoyment is found in Bohemia if it is found anywhere. There the revel runs most merrily, the tongue grows lighter and the airy nonsense of the social board sparkles in gems of wit that outshine the diamonds of the most splendid drawing-rooms. What reck they if the fest to-day is followed by fast to-morrow? Is not to-morrow a new day and did they not wonder yesterday where to-day’s feast was to come from? No shadow of the future darkens the Bohemian holiday. If such ever does rise in some graver brain it is resolutely bounced. The wind wails without and misery is buffeted by the storm, but we are warm and gay within and with good store of inner comfort for the present. Time enough to face the tempest when we are forced to; time enough to regret the past when we have no longer a future.

Thus, in studio and green-room, over the beer table and at the garret feast, the men and women who amuse the world sit down to wassail, casting their gay defiance into the face of a staid society which may frown on them for spurning its hollow creeds but can not darken the enjoyment of their holiday. Does society’s frown lighten at the sight of that haggard figure under the lighted window? Doubtless, for in that figure and many like it it sees its vengeance embodied, it sees Bohemia’s wrecks drifting upon the dark sea to which the present revelers close their eyes.