How a Georgia alligator attempted to make a meal of Captain Johnson’s son.
More...
March 20, 2017

A Bevy of Stage Beauties.

Blood on the Moon.

A Needed Addition to the Park Police of Every City. | Courtship from a Tree. 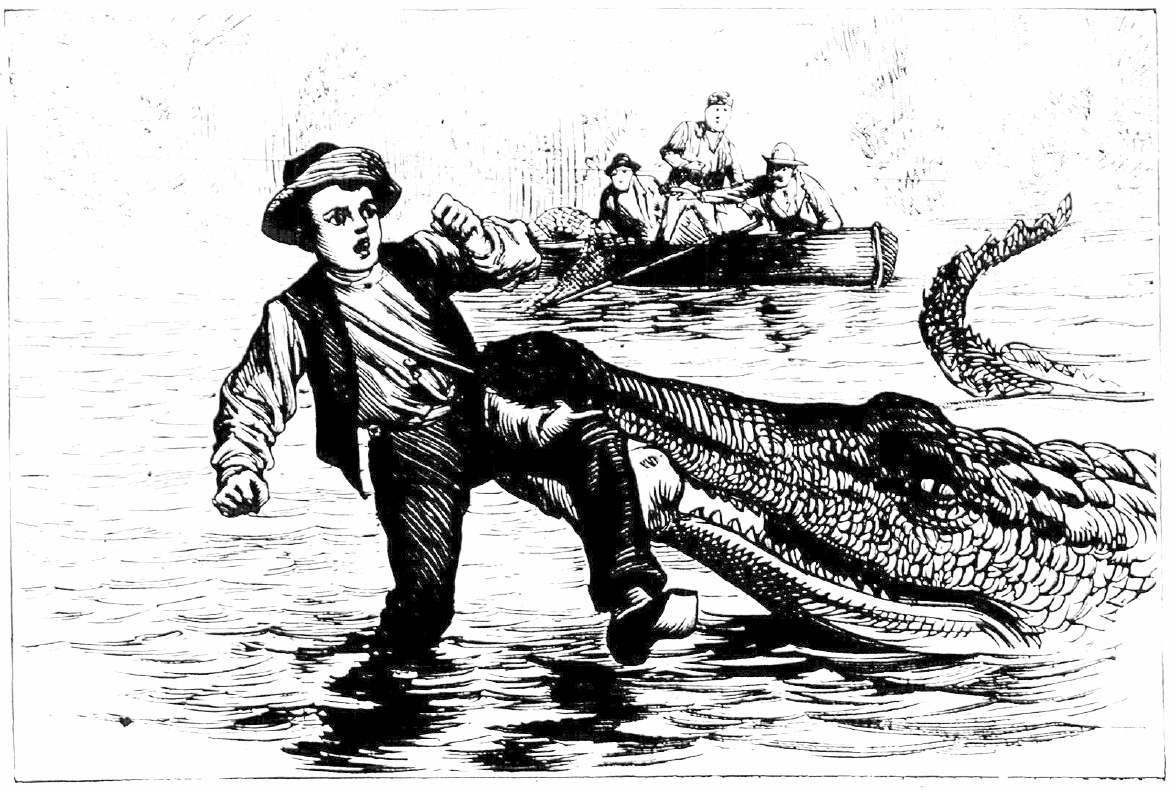 How a Georgia alligator attempted to make a meal of Captain Johnson’s son. [more]

While Capt. R. B. Johnson, of Clinch county, Georgia. was helping a party of 23 or 30 men haul for trout in a millpond, the other day. his little son, Joseph. had a most thrilling experience, Master Joseph carried a bag, or corn sack, in which to deposit the fish when caught. When loaded with as many as he could carry he would take them out and make a deposit and return for more. In making one of these trips, while wading through water about three feet deep some distance from the fishermen, a monster alligator, said to be of unusual size, rose suddenly right at the boy and seized him by the thigh. A desperate struggle ensued—the boy battled for his life and the alligator for his prey. It so happened that the bag, which hung by the boy's aide, was caught In the alligator's mouth with the thigh, and It proved a sort of shield—lessening greatly the incisions made by the brute's teeth, and thus, perhaps, preventing a shock to his nervous system which might have made him succumb without the struggle which saved him his life. By an effort the boy tore his bleeding flesh from the alligator's Jaws. The monster grimly held to the sack a moment with the delusion, perhaps, that he still had his prey, affording the boy an opportunity to escape.

He had hardly extricated himself from the jaws of death before the fishermen, alarmed by the struggle, were at hand, and another battle ensued. Thirty men, armed with gigs, poles, pocket knives and such other instruments of war as were at hand, charged upon the monster. Being In three feet of water, the 'gator bad considerable advantage, but those men had their blood up and were not to be outdone. They poled and punched and harpooned him until the brute was almost outdone, when one of the party made bold to seize him by the tail. This was a signal for a general assault. In less time than it would take to tell it, a number of the more daring had him by the tail and legs. There were too many of them for the 'gator to slap around with his tall, a peculiar mode of n 'gator warfare, and he had to give up the fight. A harpoon was plunged into his mouth and then it was safe to approach him with pocket knives. Soon his head was severed from his body, and the victorious party marched out of the pond with the monster's head on a pole.