With open mouths and protruding tusks, they warn the intruder agents too near an approach.
More...
March 26, 2018

Anti-Everything. | A Woman Rescued from the Jaws of a Catamount. 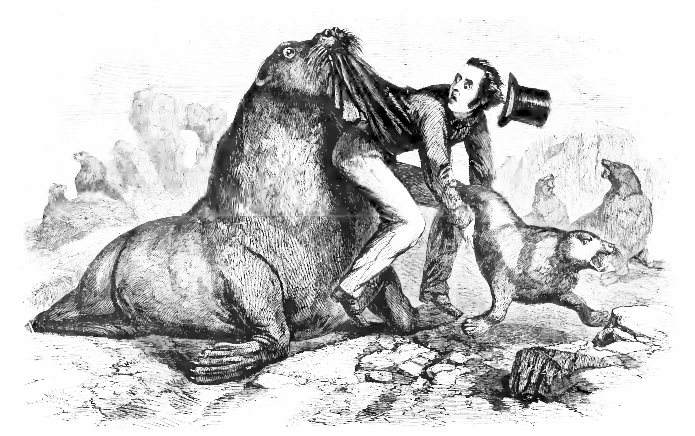 On the rocky islands off the coast of California, thousands of sea-lions may often be seen reposing in easy indifference, and forming an immense menagerie. At the approach of a stranger they generally take to the water, unless they are watching over their young, when with open mouths and protruding tusks, they warn the intruder agents too near an approach.

A recent visitor to the haunts of these animals thus relates his experience: “My companion and myself had spend some time watching the young seals at play with each other, and listening to the low moaning of the older ones, that sounded very like the braying of a mule. Occasionally, as we threw a stone among them, the majority hastened off to the water and disappeared beneath the surface. Desirous of bringing away a trophy, my friend caught a young calf, and was carrying it off in triumph, when an old warrior, evidently patriarch of the tribe, suddenly advanced upon him, seized the skirt of his coat, and with one angry shake and a loud and fearful roar, tore it from his body. This part of the programme had not been anticipated and we gladly relinquished our booty and made good our escape, not deeming a reputation of the experience in the least desirable.”