About the beginning of October, turkeys, young and old, move from their breeding districts towards t
More...
November 20, 2017

The Wedding Postponed. | Packed Away in a Trunk. 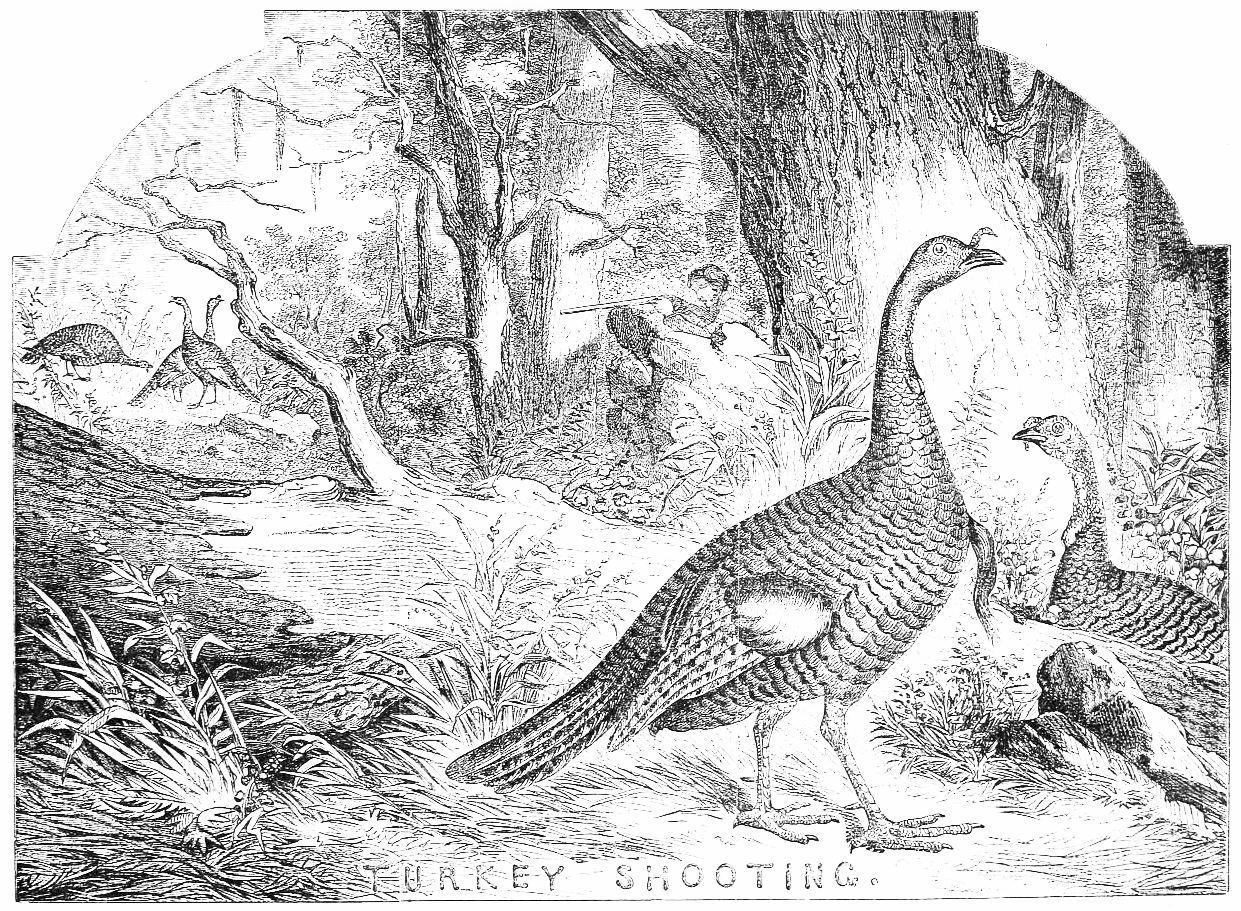 [more] About the beginning of October, turkeys, young and old, move from their breeding districts towards the rich bottom lands near the Ohio and the Mississippi. The males associate and feed in companies of from ten to a hundred, apart from the females, which advance singly, sometimes followed by their young, and sometimes in united families, forming a band of from seventy to eighty. All these exhibit a dread of the old cocks, and are constantly on the watch to avoid them; for though the young birds are now about two-thirds grown, the males seem always to regard them as rivals, and whenever they have an opportunity they will attack and often kill them by repeated blows on the head. Towards the middle of February, or early in March, the turkeys begin to prepare for breeding, the females at first shunning the males, who eagerly pursue them, and utter their peculiar gobbling call. At night, the two sexes roost apart; though usually at no considerable distance. When a female chances to utter the call-note, all the males within hearing return a loud response, in a rolling gobble of rapidly successive notes, as if with the design of emitting the last as soon as the first, much in the same manner as the tame turkey when he responds to any unusual or frequently repeated noise, but not with the spreading tail and strutting gait, as when fluttering around the hens on the ground, or practising similar movements in the morning on the branches of the roost-trees. Then their numbers are considerable, the woods from one end to the other, sometimes for miles, resound with this singular hubbub, continued from the roosting-places in alternate responses for about an hour. All then becomes still again, till at the rising of the sun they leap down in silence trom their roost-trees, and begin to strut about with expanded tails and drooping wings. Then the male and female turkey meet, the ceremonies of strut¬ting and opening the wings are carried on by both parties, with the same pomp of movement that used to distinguish the stately minuets of the courts of St. James and Versailles. The match being at length agreed upon, the attachment appears to continue during the season. At the time of laying, the hen has reconrse to every stratagem of cunning to conceal her eggs from the male, who always breaks them, in order to prevent her from withdraw¬ing from his society, by attending to the duties of incubation. At this period the hens shun the cocks daring the greater part of the day, the latter becoming clumsy and listless, meeting each other without strutting or exhibiting any rivalry.