A Duel with Whips. Two hot-blooded Georgians fight till they are raw and their weapons give out and
More...
July 14, 2015

A Hot Day in New York. | Eaten by Sharks. 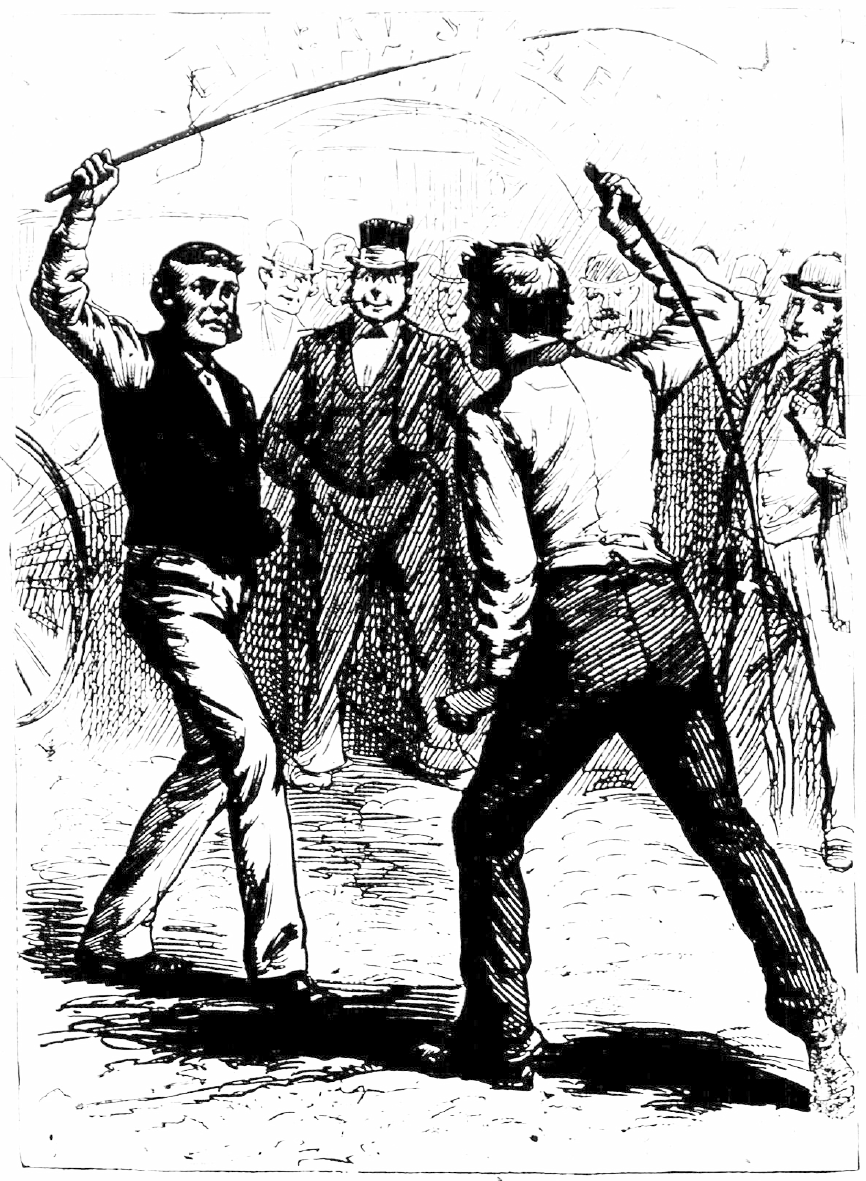 A Duel with Whips. Two hot-blooded Georgians fight till they are raw and their weapons give out and then call it a draw. [more]

Two Georgians Fight Until they are Raw, But Neither Wins.

In Harmony Grove, Ga., a few weeks ago as already briefly reported in these columns, a couple of men, a Mr. Hill and W. L. Goss, had a novel Duel. An eye witness of the affair thus reports it:

Hill was the challenger, and Goss said he didn’t care to fight with deadly weapons, but if Hill would not be satisfied any other way he would fight him with buggy whips. The distance and other rules to govern the fight were made, new buggy whips were procured and the parties toed the mark, about five feet apart, and operations commenced. The battle ground was in front of Freeman’s livery stable in the heart of the town, and it was not long until the most of the citizens of the place were looking on at a safe distance. No one had interfered and the combatants were making steady and regular licks upon each other without flinching ant the stoics of the whips could be heard several blocks away, as they went whizzing through the air and upon the backs of the two men.

Occasionally one or the other would back a little from his line, but he would soon come back again to the scratch. Whenever they got tired one would call out to hold up for awhile, and they would go a t it again. The fight continued for over three hours, with short intervals for rest. After the second round Hill, who had no covering on his back except a shirt, insisted that Goss should pull off his coat, which he did, and they took both hands to their whips and went to work. By this time the news of the fight had spread all over the town; some of the merchants closed their stores and business was generally suspended to see what would be the result of the encounter. After they had worn out $7 worth of buggy whips and were completely tired down they agreed to quit, and Hill told Goss that he was satisfied.

From parties who saw Hill’s back we learn that there was not a place on it that you could place a silver quarter without touching the welts of the whip had made, and he was marked all over in the same way. We learn that Goss was not hurt quite so bad.