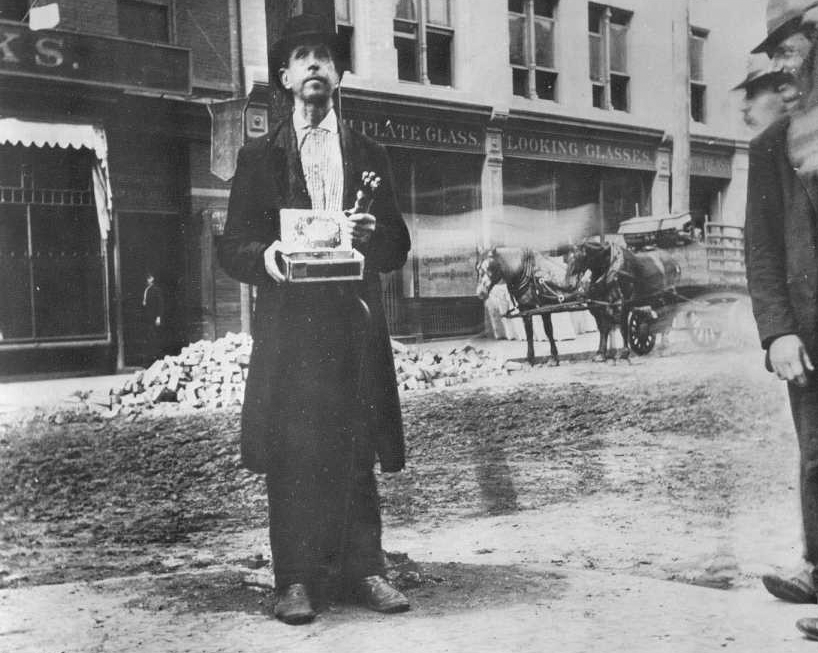 Boston, 1894 - The 1890s were golden years for begging. Economic times were hard and no one was doing well, but those who were physically unable to work had very few options but begging. They would beg on street corners or go from house to house asking for help. It was also a generous and trusting time; the disabled, deformed, and impaired were a reminder that things could be worse. Nearly everyone could spare a few coins for the less fortunate. But begging had become so lucrative in major cities that most beggars were actually able-bodied swindlers.[more]

They usually worked in small groups that would meet after a day’s begging to pool their money and divide it up at some pre-agreed rate. The group would have one leader who would take a small amount from each day’s take and maintain a cash reserve to be used to pay bail and fines, and to tide them over when donations were scarce. Each morning they would dress up to appear in distress, wrapping bloodstained bandages around their bodies, or painting scars and lacerations on their skin, or building up the inside of one shoe to force them to limp.

Each man would take a section of the city beg there until he became too familiar on the street to make any more money or he was driven off by the police. Often the men would sell pencils or other cheap knick knacks to make arrest for vagrancy less likely. They would sometimes hand out pre-printed cards, with verses such as this, to stimulate giving::

Don’t cast this from you, reader,
But read my story through;
I, like many other unfortunates,
Must ask the aid of you.
Misfortune has befallen me,
Like many more before,
My appeal, I wish to tell you,
Is to keep hunger from the door, 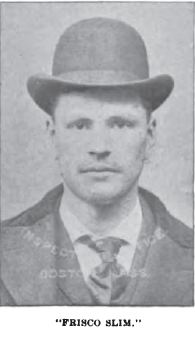 One band of swindlers well known the Boston Police was led by a man known as Frisco Slim. Even nickname was a fraud; weighing over 200 pounds he was anything but slim. Frisco Slim had lost a finger at some point in his life, possibly in a brawl while gambling. He would augment this disability by treating the skin of his arm with a chemical to simulate a bad burn, giving the impression that he had been the victim of a debilitating accident. Frisco Slim had two lieutenants named English Harry and Sheeny Si. Though they were professional beggars like Frisco Slim, they all claimed to have regular occupations when questioned by police. Slim was a painter, Harry a bartender, and Si a railroad brakeman. They kept a dirty tenement room in Boston’s West End, furnished only with filthy mattresses and vermin haunted blankets. 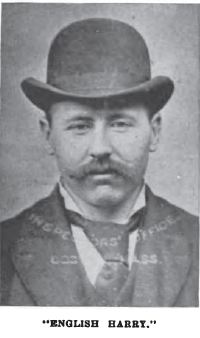 They were always on the lookout for new gang members, especially young people who proved to be the best earners. In 1894 Frisco Slim came across a young orphan boy from Connecticut who was traveling alone. Enticed by promises of making up to ten dollars a day doing nothing, the boy followed Slim back to the room the gang’s West End room. They put his arm in a plaster cast, gave him the nickname, Kid Johnson, and sent him out to beg.

Kid Johnson proved to be a prodigious earner, but his career of begging in Boston was not long lived. Sometime during the winter of 1894-1895, the Boston Police raided Frisco Slim’s lair, arresting Slim, English Harry, Sheeny Si, and several other members of the gang, including Kid Johnson. 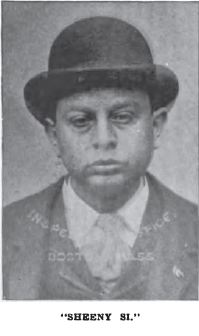 The hardened criminals were put in jail, but police held out hope that young Kid Johnson could be reformed. They took pains to find him a good job as a clerk with opportunity for advancement. He tried it for a while, but Kid Johnson soon bolted. He left behind a letter thanking his friends at the police department for their kindly care and regretting that their hope in him had been disappointed. He was already hooked on the easy life and left Boston to join the knights of the road.