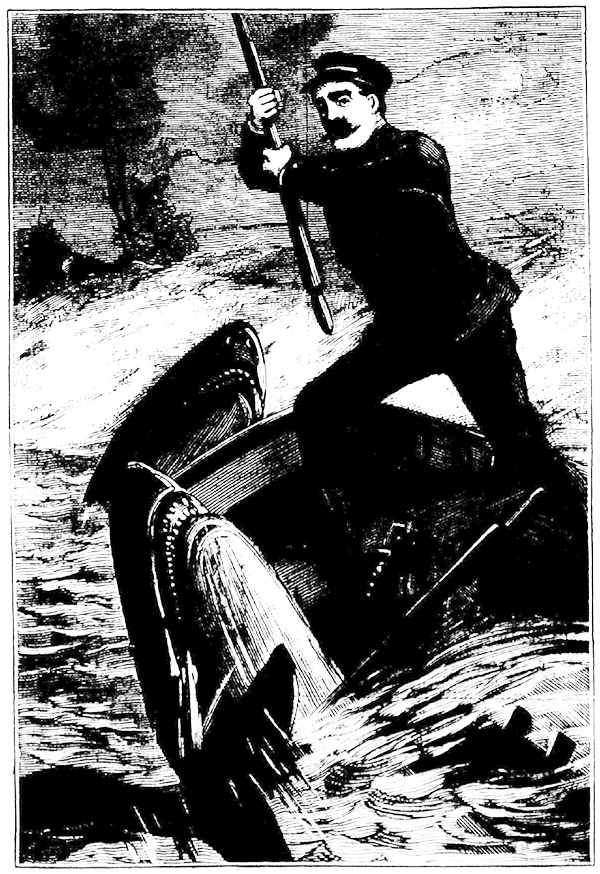 A Duel with Whips. | Oscar Wilde Gets a Reception.

In the Jaw of the Man-Eaters.

James E. Hamilton of Lake Worth, Florida, is Devoured by Sharks. [more]

Terrific But Vain Fight of a Mail Carrier With Man-Eaters.

A special form Jacksonville, Fla. Oct 20, says: The dread of the mail carriers on the Florida southeast coast are the Hillsboro and New River inlets, which have to be crossed by small boats. Here the dark waters of the Everglades empty into the Atlantic with tremendous force at this season, and if the ocean is rough the meeting of the cross currents produces heavy and dangerous seas. Sharks of the fiercest kind fill the inlets.

James E. Hamilton, the mail carrier from Miami to Lake Worth, was an athletic young man and carried the light mail on his shoulders, waking the entire distance. Seventy-five miles, on the beach. He left Lake Worth on Tuesday, in the morning, and should have reached the Refuge Station, twenty-five miles distant, that afternoon.

Late at night a fisherman named Waring came to the station and told the story of Hamilton’s horrible death. Waring was about one-half mile from Hillsboro Inlet when he saw Hamilton get into his boat to cross. He noted that the sharks were about in unusual numbers, and just as Hamilton reached the center of the crossing a huge one drove at the boat and bit a piece off the gunwale.

Hamilton struck at the sharks, but nothing could drive them off. Soon both oars were bitten in two, and then the fierce tigers of the sea seemed perfectly ravenous. The tore at the boat, snapped at one another, and the water for yards around was dyed with their blood. The boat began to fill, and the sharks scenting their prey, redoubled their dashes.

Hamilton stood on the middle seat as if stupefied glaring at them. Looking up and seeing Waring, he cried out to him, but in vain. Even as he shouted a huge monster dashed up and hit the partially filled boat a tremendous blow, throwing Hamilton out into the midst of the monsters.

A cry of agony was heard as he went down, and the devourers had him piecemeal before the horror-stricken spectator could take in the full measure of the tragedy. As soon as Waring recovered his senses he went to the station and told of the affair. A searching party went out at once but nothing was found save the remnants of the boat cast on the shore.