Tennis. | Independence Day in the Country. 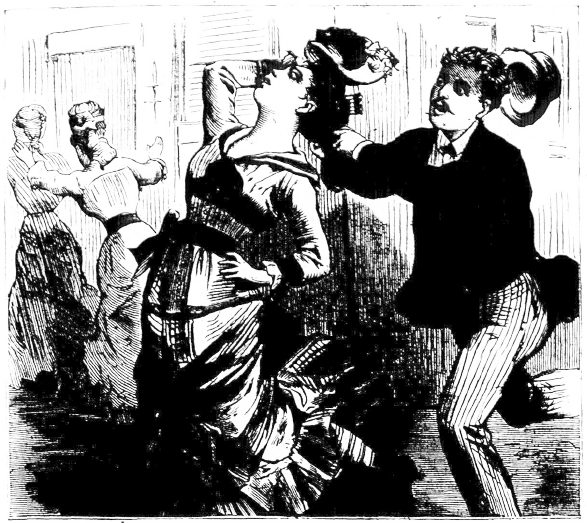 A lunatic makes his escape from confinement and employs his energies in divesting ladies of their hair; Louisville, Ky.[more]

At Louisville the other evening about seven o’clock a well-dressed young man, about eighteen years old, made his appearance on Preston street, between Jefferson and Green, and suddenly started after a lady walking along the pavement with a baby in her arms. The lady ran, and he pursued her across the street, where she entered her gate. The villain or madman, as it was unable to decide at the time, then ran across to the west side of the street and started in pursuit of three young ladies, who were coming down the street. The ladies ran screaming until they reached a three-foot alley between Mr. Peter Stark’s house and an adjoining saloon. They ran to the back end of the ally, and into the saloon. The man rushed in right on their heels, and grabbed one of the young ladies by the hair, threw her violently on the floor. In almost an instant, however, Mr. Stark and the gentleman in charge of the saloon, attracted by the screams of the terrified girls, ran in and caught the lunatic by the arms and released the prostrate lady. She was almost frightened to death, and could hardly walk or speak. The two gentlemen started to the First street station house with the young man, but met Officers Ryan and Darling on the way, who took charge of the captive and conveyed him to the station where he gave his name as Youse, a false name. A short while afterward his brother, who had heard of the occurrence, came to the station house and informed the officers that the young man was non compos mentis and irresponsible for his actions.