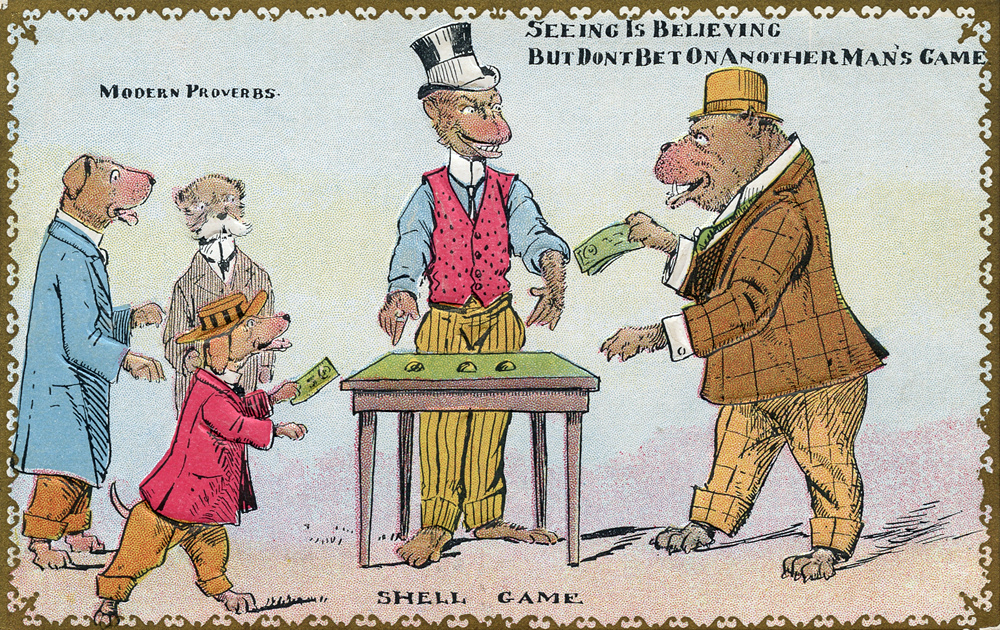 America - The shell game is the oldest and simplest of the short cons.  Known for centuries in Europe, if it did not come to America with the pilgrims, it certainly arrived soon after.  In the classic shell game, a pea, or other spherical object, is placed under one of three walnut shells or thimbles. The shell man shuffles the shells around a flat surface, trying to confuse the player. The player wagers on which of the three shells contains the pea. The miracle of the shell game - from the conman’s point of view - is that everyone knows the game is crooked, but everyone thinks he can beat it.[more]

The most important fact pertaining to the shell game is that it is not a game. It is a tiny bit of theatre, a magic show presented at your expense.  If you see someone picking the correct shell, or if the player chooses wrong but you, as an observer, can always pick the correct shell, you are not watching a real player. The shell man and the shill are putting on a performance to make you feel confident enough to bet. When it is your money on the line, you can’t possibly win. The shell man palms the pea early on and can make it appear, or not appear, under any shell he wants. The shell man and the shill, and maybe one or two others-whose job it is to watch for the police and to make sure you stay interested-will split the winnings. 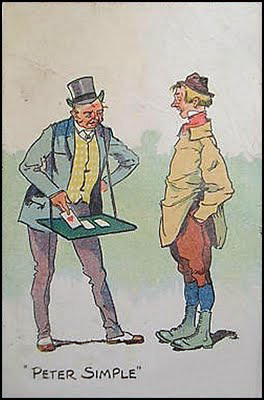 The most common form of this game in the United States is three card monte, in which three playing cards are used instead of shells and a pea.  The dealer will show three cares-two black aces and the queen of hearts, or two red deuces and the ace of spades, etc.-and he will toss them back and forth across the table. When the dealer is not trying to conceal its location, a careful observer can follow the money card, but when a real bet is placed, a simple flick of the wrist will swap the cards, unnoticed by the player. The selected card is turned over and amazed player is now a little bit poorer. 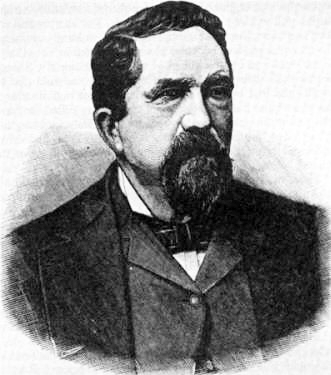 Three card monte allegedly originated in the California gold fields in 1849 and spread rapidly across America. Though notoriety was not something a monte dealer would actively seek, by the end of the 19th century there were several whose names would forever be associated with the game. George Devol was a gambler on Mississippi riverboats. Contrary to the romantic image, a professional riverboat gambler was not a well-dressed, but adventurous, gentleman, in pursuit of lady luck; if he made his living gambling, he was a cheater. Only two types of men gambled on riverboats; cheats and their marks. When there was time, Devol would organize a crooked poker game; when there was not he would play three card monte. He did this for over forty years. 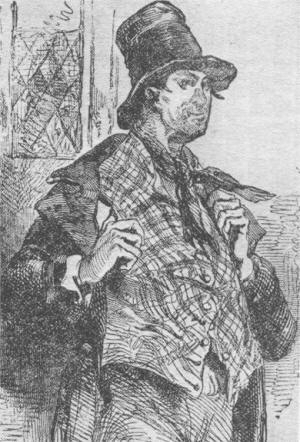 Some said the best three card monte man was Devol’s longtime partner, Canada Bill Jones.  Though famous for his good heart and habit of giving away his winnings to those in need, Canada bill is also famous for saying, “suckers have no business with money, anyway.” Herbert Asbury described Canada Bill this way:

"The greatest Monte thrower on the Mississippi was Canada Bill Jones, probably the cleverest operator who ever “pitched a Broad,” and one of the few men who could display the Monte tickets and, in the very act of tossing them on the table, palm the queen and ring in a third ace, thus reducing the sucker’s chances to minus nothing."

He was also known as the worst dressed gambler on the river, wearing clothes that were too big, and looking more like a hayseed than a card sharp. No doubt that helped him succeed. 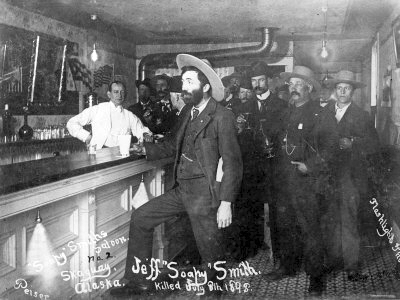 Others say the greatest three card monte man was Soapy Smith. Jefferson Randolph Smith earned the nickname “Soapy” by selling soap in mining camps (he was portrayed in the recent television series, Deadwood, as the annoying little man always hawking “soap with a prize inside.”) He became one of the greatest American conmen, with one of the largest bunko gangs in history. But three card monte was his passion. He would be constantly working the crowds and when a crowd didn’t exist he created one. In 1892 he exhibited the body of a petrified man, known as McGinty, in Creede, Colorado,  with the express purpose of playing three card monte with those standing in line. Soapy Smith was killed in the Klondike in 1898, by a man who did not want to pay his three card monte losses.

As incredible as it seems, three card monte, and the old shell game, are still found on the streets of America’s cities. The fact that this particular hustle, despite frequent and persuasive debunking,  has thrived in our cities for over a hundred and fifty years, is pretty much all you need to know about America.