An Irishman and a Yankee Settle a Dispute. | Anti-Everything. 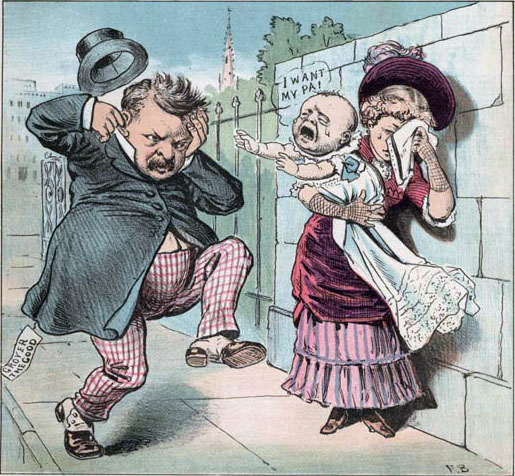 July 1884-Another Voice for Cleveland. In the presidential election of 1884, Maria Halpin accused candidate Grover Cleveland of being the father of her love-child—a charge the candidate did not deny. [more]

In 1873, Grover Cleveland was an up and coming lawyer in Buffalo, New York with a reputation as a hard drinking brawler and womanizer. He was introduced by a mutual friend to Maria Halpin, a young widow who worked in a department store and on the evening of December 15, 1873 Cleveland met Maria on the street and persuaded her to join him for dinner. After dinner he walked her back to her apartment and there, in a situation that could only be described as rape, he had sex with her.

Six weeks later Maria Halpin realized she was pregnant. In hysterics she went to see Cleveland and insisted that he marry her. He told Maria he would do “everything that was honorable and righteous” and, according to Maria, he agreed to marry her. He put her in the care of Dr. James E. King who delivered the baby boy on September 14, 1874. At Cleveland’s insistence the boy was named Oscar Folsom Cleveland, after his best friend and law partner, Oscar Folsom. But Grover Cleveland did not marry Maria Halpin.

Dr. King took the baby and for the first year of his life he was raised by a foster family who called him Jack. Maria took him back and raised him as Oscar Folsom Cleveland, but 1n 1876, Grover Cleveland arranged to have Maria declared an unfit mother due to alcoholism. She was sent to a lunatic asylum and the boy was sent to an orphanage. In 1877, Maria Halpin was given $500 to give up the child and Dr. King took him from the orphanage and raised him as James E. King, Jr. 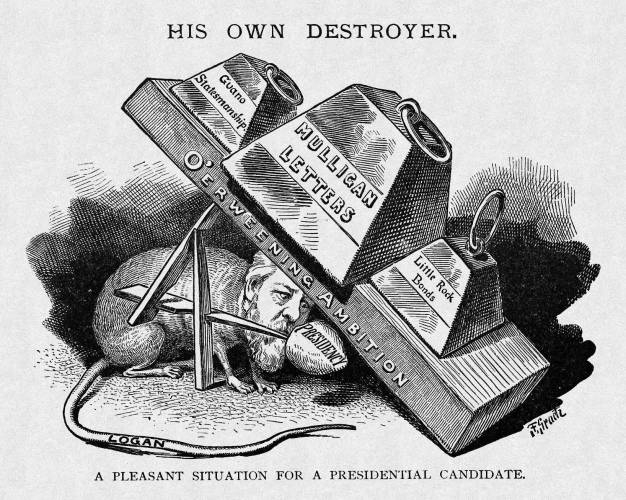 Despite persistent rumors, Grover Cleveland was able to keep the matter quiet through successful campaigns for Mayor of Buffalo and Governor of New York. In 1884 Cleveland was chosen as the Democratic candidate for president. With a reputation as a reformer and a man of integrity, Cleveland was seen as the perfect opponent for James Blaine, the scandal ridden Republican candidate, who was accused, as Speaker of the House, of pushing legislation to benefit various railroad companies in exchange for financial kickbacks. Cleveland’s candidacy was so appealing that may prominent, life-long Republicans bolted from their party to support him.

But in Buffalo, some of those who were familiar with the story of Cleveland’s illegitimate child and his treatment of Maria Halpin, did not feel they could stand by and watch such a man become President of the United States. In July 1884, during the Democratic Convention, Reverend George H. Ball, pastor of the Free Baptist Church in Buffalo, sent a letter to the Chicago Advance telling the whole story. The letter bounced around to several newspapers before the story was finally published by the Buffalo Evening Telegraph.

The press was exceedingly partisan in 1884—Republican papers picked up the story and ran with it while Democratic papers ignored it. But the voting public could not ignore the Halpin Scandal and many who had once ardently supported the reform candidate now had doubts. Cleveland was dogged at rallies by opposition groups chanting “Ma, Ma, where’s my Pa?”

Cleveland himself decided to stay above the fray and issued no public statement, hoping the scandal would blow over before Election Day. He told his campaign staff, “No matter what, tell the truth.” –which they almost did. They admitted that in an act of youthful indiscretion Cleveland had taken up with Maria Halpin, as had two of his friends, including Oscar Folsom. When she became pregnant, Cleveland, being the only bachelor of the three, took the responsibility to save his friends from shame. In fact, they said, no one knew who the father was.

This statement infuriated Maria Halpin, who had never known a hint of scandal until she met Grover Cleveland.  She issued a sworn affidavit saying, “There is not and never was a doubt as to the paternity of our child, and the attempt of Grover Cleveland or his friends to couple the name of Oscar Folsom or any on else with that of the boy, for that purpose, is simply infamous and false.” In a second affidavit she described in detail how she had been ravished by Grover Cleveland, saying, “While in my rooms he accomplished my ruin by the use of force and violence and without my consent."

The presidential election now came down to which candidate’s scandalous behavior was less repellent to the public, Blaine’s railroad kickbacks or Cleveland’s abuse of Maria Halpin. Cleveland won an extremely close election; he won the popular vote by just 25,000 and a switch of 600 voters in New York would have given Blaine the election.

The Halpin Scandal soon died down and eventually was all but forgotten. In fact a 768 page biography of Grover Cleveland, published in 1923, does not even mention Maria Halpin. On June 2, 1886, Grover Cleveland married Frances Folsom, 21-year-old daughter of his late law partner Oscar Folsom. Grover Cleveland was the last bachelor to be elected president.