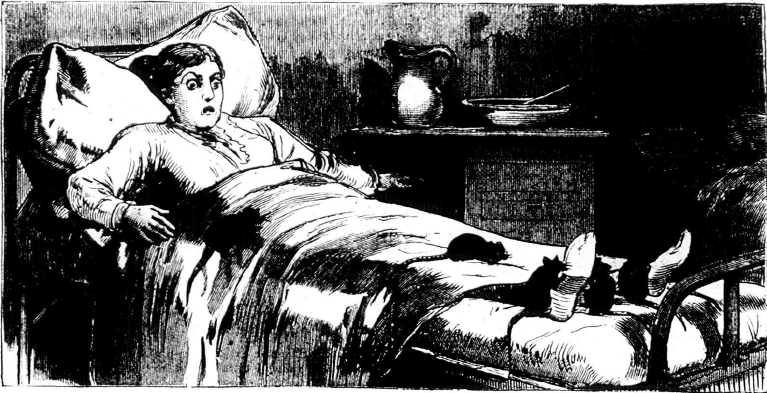 September 1880 - A helpless Woman while staying in a hospital, has her toes eaten off by rats; Alameda County, Cal.[more]

August Johnson, the husband of Margaret Johnson who died in Alameda County Hospital, has made the following damaging statement of the treatment of his wife while in that institution:

“After I received a telegram stating that my wife was dead, I went out there with some others to see about it, and took her two children with me. She was paralyzed in her legs and arms, and could not help herself. The nurses have been discharged out there, and there was no one to attend to her. One of the patients told a lady who was there to take off her stockings. I found all her tows eaten off. The patients said the rats ate them off before she died. The doctor was three. He asked if I wanted her buried. I said ‘Yes.’ He replied, ‘I will bury her now while you can see it.’ He then sent some men to bury her. The put her in an express wagon and we followed in our buggies. When we got to the burying ground there was no grave dug and this was between 3 and 4 o’clock in the afternoon. They laid the coffin down on the ground and went back to the hospital after a pick and shovel. We could not wait for them to come back and dig the grave, as I had a tired team and it was so far, and I had to be back at a certain time.

“I do not know whether they buried her or not. I asked for her clothing, but cone not get it. No one seemed to know what had become of it."

Marshall Glynn makes a similar statement, saying that he went to County Hospital with Mr. Johnson, and saw the body of Mrs. Johnson, the toes were eaten off by rats. The blood had run down her foot into the heels of her stockings.

A patient named Annie, a paralyzed woman, and another patient named Mrs. Evens said that the rats ate at her feet before she died. She could not help herself. They heard her wild cries for help, but could not get to her, and those that could move paid no attention. She was lying in a hallway off from the rest. They saw rats jumping on and off her bed. I was out there before on Sunday, September 12. At that time there were no nurses, and she had no attention except what she could get from the other patients. The patients told me there were women around there who stole the clothes form the dead people.