Dizzy cigarette girls have a most hilarious time in the Lyceum Opera House, this city.
More...
August 21, 2017 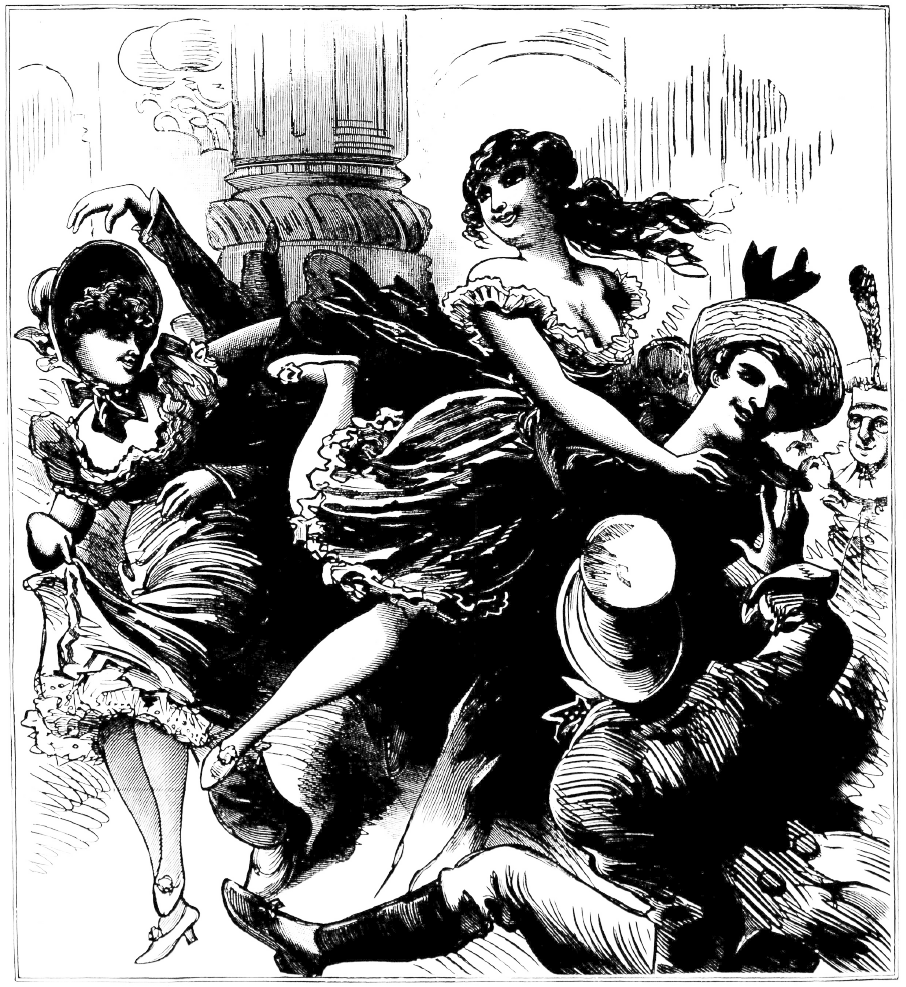 Dizzy cigarette girls have a most hilarious time in the Lyceum Opera House, this city. [more]

The Lady Flashes, an organization of the New York cigarette girls, had their annual ball in Lyceum Opera House, this city, last week.

After the grand march there came the lanciers. Such a whirling and stamping and jumping is seldom seen. Buxom lassies were tossed high in the air, landing with a heavy indisposing thud. As the music rose and quickened a fat girl shot up five feet in the air and landed in a sitting posture.

“Oh, Roxy, are you hurt?” asked the girl next her.

“It’s the softest thing I ever struck.” said Roxiana, as she rose to her feet.

Just where the cigarette girls get the marvelous step they dance is a mystery. They would stride five feet, hop three feet, circle stretch their legs as if there were a pair of calipers, close them, half open them, twist them around each other, untangle, kick and wriggle and then sink into the arms of a young man and rest their head on his shoulder.

As the time flew, beer followed it. Cigarette girls like beer and are susceptible to its effects. It brings about a feeling of affectionate languor. It banishes the blue law, that forbids a young man to kiss a girl, and bids him kiss her as often as he can. It also directs him to make a mattress of himself if necessary, and permit a girl to recline at will. In the second chapter it bids a young man become lively and urges the girl not to suppress her hilarity. The second chapter was reached about 2 A. M. Costumes with troublesome trains were cast aside The heat caused heavy Mother Hubbards to be thrown off.

The ardor of the dancers increased. They hugged each other vehemently as they danced and executed wonderful movements. Beer-glasses were tossed aside as worthless for refilling.

Crowds gathered in corners and gazed tremulously at visions of limbs flashing in difficult dances like streaks of lightning. The Koota-Koota dance, adorned with east-side variations, was realistic.

The young men rushed about, and when the orchestra poured forth “Old Rocky Roads” bedlam broke loose. Knots of dancers vied with each other in their efforts to create confusion. Girls were lifted off their feet and carried laughing about the room.

In the cork-room even policemen, unable to resist the temptation, joined in the dance. Hats were kicked high in the air. Songs were sung that called forth choruses of “Ohs.”