Mr. Craighead and the Lyke Wake: A Cautionary Tale

The old British custom of “lyke wake” consisted of keeping a night watch kept over the recently dead.  ("Lyke" is an archaic word for "corpse.")  It was usually a quite festive affair, where many people gathered for feasting and frivolity of various sorts.  This combination of dissolution and dissipation was, as you might imagine, the setting for any number of curious events.  One of the
More...

Cicciaro’s Italian Restaurante (their spelling, not mine) looks like it’s been closed for ages, the steel grates over the small storefront locked shut and layered with graffiti. I couldn’t find any clues about this literal hole in the wall at 47 Market Street, which still occupies the ground floor of a tenement built in 1886, […]
More...

In 1874, Joseph LaPage, a French-Canadian woodcutter, raped and murdered Marietta Ball, a young schoolteacher in St. Albans, Vermont. He was released for lack of evidence. A year later he struck again, raping and brutally murdering 17-year-old Josie Langmaid in Pembroke, New Hampshire. After two contentious trials, he was convicted of Josie Langmaid’s murder.Read the full story here: Josie
More...

The Popular Officer Harrington- an Update

Officer Harrington of the Fall River Police Department had some serious doubts about Lizzie Borden from the very hour after Andrew Borden’s death. Called to give testimony on a number of observations he had made on August 4th- none brought so much reaction from Lizzie as Harrington’s precise description of what she was wearing when she changed her clothing up in her room shortly after the body of Abby Borden had been found in the guest room by neighbor, Addie Churchill. “It was a house wrap, striped with pink and light stripes, alternately. Pink was the predominate color. In the light stripe was a diagonal formed by lighter stripes, some parallel and others bias. It was fitted to the form in a tailor-made manner. It had a standing collar. It was closely shirred, gathered closely at the front. From the waist to the neck it was puffed with a number of folds. On either side, directly over the hips, was a narrow red ribbon. This was brought around in front and tied in a bowknot. It was cut with a demi-train or bell skirt which the ladies were in the habit of wearing last year.” Newspapers reported that Lizzie smiled broadly at this unusually detailed report issuing from a male, and actually laughed softly and turned around in her seat to see what the crowd which was packed into the small courtroom thought about it all.Trial Testimony of Officer Phillip Harrington, June 8, 1893. Philip Harrington was born on April 17, 1859, making him just one year older than Lizzie Borden. The son of Irish immigrants, James and Mary McCue Harrington, Phillip was one of four children born to the couple in Fall River, having an older brother, James, younger brother John and a younger sister, Mary. On October 25, 1883 he married for the first time, a Miss Julia E. Sullivan, the daughter of John and Margaret Sullivan from Ireland. He had been appointed to the police force on March 2, 1883. Phil was well-liked by his associates and very popular in Irish and Catholic social circles in the city. Sadly, Julia died on March 21, 1886 of Phthisis (pulmonary tuberculosis) at their home at 33 Borden St. On February 10, 1893 he was appointed Captain and went on to duty at the central station first as a night officer, then on to daytime duty. His second marriage to Kate Connell, daughter of John (O’)Connell, ticket taker for Old Colony Steamboat Company, was quite an event in fashionable Catholic circles and was performed at St. Mary’s ,right across the street from the Borden house on October 11, 1893. “Kate”, Katherine T. Connell was the sister of Lizzie, David and William Connell. Originally the family surname was O’Connell but the “O” was soon dropped after the family patriarch arrived on American shores from Ireland and settled at 25 Whipple Street which is located just behind St. Anne’s church. Capt. Harrington had not been well for some time but was feeling better the day of his nuptials. In May, a few months before his wedding, his brother James had died . Philip had lost his mother, Mary McCue Harrington in 1872 and his father James in 1881. There was only his sister-in-law, Bridget and his sister Mary, to attend his wedding from his own family. The wedding took place at St. Mary’s in the shadow of the Borden house on Second St.Stopping off in Newport before taking the night boat to New York to commence his honeymoon, Harrington was taken violently ill with pneumonia and could not continue. He lingered some days in excruciating pain, nursed faithfully by his bride. He passed away on October 28th at the home of Councilman McCormack, who had been one of the wedding ushers. The wake held on Whipple Street continued right up until the hour of the Requiem Mass- 6,000 mourners passed by the coffin. The funeral on Halloween was one of the largest seen at St. Mary’s, with the city marshal, police force and friends packing the church to capacity. A thousand more stood outside the church and joined in the procession to St. Mary’s Cemetery on Amity St. Harrington lived long enough to see Lizzie Borden acquitted. He was 34 at the time of death.His widowed bride, Kate, remarried to Michael Robert Skelly in 1909 after years alone on Whipple St. She never had children. She is buried in St. Patrick’s . Phil Harrington is buried in St. Mary’s Cemetery on Amity St. with his parents and brother, but lives on in the Borden saga due in large part to his detailed description of that famous pink and white- striped wrapper worn by Lizzie Borden on August 4. 1892.
More... 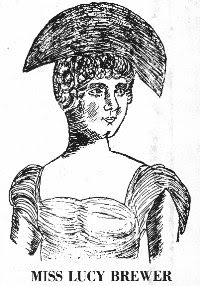 Boston, Massachusetts, 1812 – Lucy Brewer (alias Louisa Baker) escaped a life of prostitution by donning men’s attire and enlisting as a seaman on the USS Constitution. [more]

In August 1815, Boston printer, Nathaniel Coverly Jr., published a pamphlet entitled An Affecting Narrative of Louisa Baker, which became an immediate bestseller in New England. It is an autobiography, in which Miss Baker relates the story of her journey from idyllic rural Massachusetts to the depths of urban degradation in Boston, to military glory on the deck of a Navy frigate.

Louisa Baker was born in small town forty miles outside of Boston. In her teens, she fell in love with and was seduced by, a handsome young man who promised to marry her.  But after stealing her virtue, the young man left without fulfilling his promise. “I was conscious,” she says, “of having forfeited the only gem that could render me respectable in the eyes of the world.” She found herself pregnant and, afraid to face her parents with her shame, she traveled alone to Boston.

She tried to find work as a servant and ended up in the household of a woman she believed was a kindly mother with a number of “darling daughters.” The mother nursed Louisa through her pregnancy, but the baby died at childbirth. It was then that she learned the true nature of the household.  It was a house of prostitution and her benefactor now demanded that she work off the debt she had incurred or risk public humiliation.

Louisa Baker worked for three years as a prostitute in the most degrading circumstances. She could see no escape, until one day, inspired by the well-known story of Deborah Sampson, who fought in the American Revolution dressed as a man, Louisa put on a sailor’s suit, wearing a tight waistcoat underneath to conceal her breasts, and walked through Boston. When she saw that she could pass as a man with no problem, Louisa enlisted in the American navy under the name George.

During the war of 1812 she fought in a number of engagements with British warships and distinguished herself in battle. After three years’ service she took her wages and left.  She bought new clothes, reassumed her female character and returned to a happy reunion with her parents.

The pamphlet sold so well that a sequel was published in November 1815. In the second pamphlet, entitled The Adventures of Lucy Brewer, (alias) Louisa Baker, we learn that the protagonist’s real name is Lucy Brewer, her home is Plymouth, Massachusetts, and she sailed on “Old Ironsides”— USS Constitution. She also relates some further adventures where Lucy, in man’s attire, proves more manly than her foes.

The sequel was successful as well, and in May 1816, a third installment, The Awful Beacon of the Rising Generation, was published. In this pamphlet, the brother of a woman whose honor had been defended by Lucy (dressed as a man) recognized the story from the previous published work, and came to Plymouth to see her.  The man, Charles West, began courting finally married Lucy. The rest of the pamphlet is a caution to young women on the danger prostitution and a warning that young men can be ruined as well, by disease or theft, if they are unwise enough to visit prostitutes.

In 1816 the three pamphlets were combined under the title The Female Marine and between 1815 and 1818 there were at least nineteen editions of The Female Marine or its component parts. After 1818 the book went out of print until 1966.

Historians have tried to verify the story of Lucy Brewer, but unfortunately have not found any confirming records of Lucy Brewer, Louisa Baker, or Charles West and no one onboard the Constitution during the war of 1812 had a first or last name of George. The story was probably made up, whole cloth, by the publisher, Nathaniel Coverly. Though Lucy Brewer probably did not fight in men’s clothing, there are many confirmed stories of women disguised as men fighting in the American Revolution and the War of 1812, and historians believe that hundreds, or even thousands, of disguised women served in the Union and Confederate armies during the Civil War.