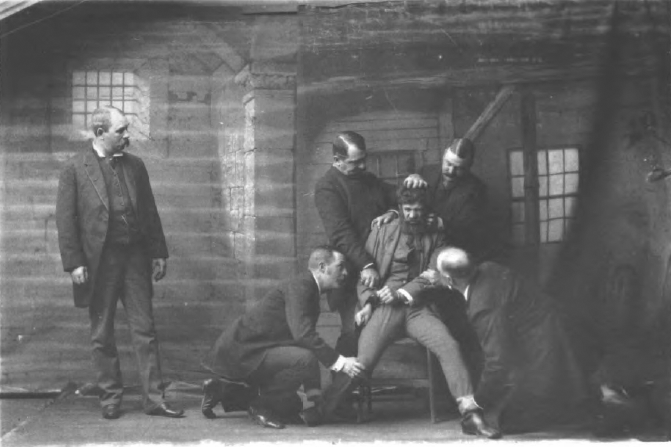 Thomas Byrnes and his men giving a suspect the "third degree."

The nineteenth century saw the rise of the professional detective, both public and private, as a leading figure in the fight against crime. On a city police force, it was no longer sufficient for an officer to grab a ne’er-do-well off the street and throw him into jail, he must also gather the evidence and testimony needed to convict the perpetrator. The force needed men—and sometimes women—with the ability to read clues and follow the trails of a criminal class growing ever more sophisticated at eluding detection. In the private sector as well, agencies sprang up to provide these services to those who, for whatever their reason, were not interested in making their investigations public.

The National Night Stick begins a series of post on The Great Detectives, with New York City Police Inspector Thomas F. Byrnes, who, almost singlehandedly transformed the department from a collection of club wielding thugs to a modern, efficient crime fighting organization. Under Byrnes’s leadership, police procedures were standardized and criminal information was stored systematically; the New York City Police became the model for police departments throughout the country.

Thomas Byrnes became a police patrolman in 1863, and that same year he distinguished himself during the New York City draft riots.  He rose through the ranks on the strength of his outstanding arrest records and in 1872 became Captain of the Fifteenth Precinct. During this period, Thomas Byrnes led the investigations of a number of famous New York City crimes: the murder of Jim Fisk, the murder of Maud Merrill, the Manhattan Savings Institution robbery. When the first detective bureau of the New York City Police Department was established, Thomas Byrne was made chief inspector.

The core of Byrnes’s crime solving success was the employment of extreme interrogation methods, known as “the third degree,” to extract information. With two of his men holding the suspect, Byrnes would put on a leather glove and beat the man—in places where the bruise would not show—until he revealed the required information. He would also employ deception and run undercover operations, sometimes using ex-prostitutes to obtain information. No criminal passed through the New York Police Department without being photographed, and Inspector Byrnes maintained a "Rogues Gallery" of mug shots, and a private museum of burglary tools and weapons.

Thomas Byrnes was also a master of self-promotion. In 1886 he published the photographs of more than 200 criminals along with brief biographies of each and explanations of various criminal techniques in his book Professional Criminals of America. The book was ostensibly for the benefit of police departments throughout America, but it became popular with the public and has been reprinted numerous times. (Now in public domain, the book is the source of the material in The National Night Stick’s “Rogue’s Corner.”) Some of Byrnes cases were romanticized in books such as A Tragic Mystery, The Great Bank Robbery, and The Fatal Letter. Purported to be “From the Diary of Inspector Byrnes;” the books were written by journalist/author, Julian Hawthorne, son of novelist Nathanial Hawthorne.

But not everyone was impressed with Thomas Byrnes. The ethics behind his methods, which were often no better than those of his rivals, put him at odds with reformers and journalists. In a rush to find the killer of East Side prostitute Carrie Brown—whose murder was being compared by the press to those of London’s Jack the Ripper—he railroaded Ameer Bin Ali, convicting him on tampered evidence. Journalists Jacob Riis and Charles Edward Russell campaigned to have the verdict overturned, and eleven years later they succeeded.

Cases like this one, along with Byrnes close association with Tammany Hall, began to tarnish his image. He was never able to satisfactorily explain how he had amassed a personal fortune of $350,000 on a salary of $5,000 per year. In 1895, when reform-minded Theodore Roosevelt was appointed Police Commissioner, Thomas Byrne was forced to resign. In spite of his flaws, Thomas Byrne left a lasting imprint on American law enforcement as was truly one of The Great Detectives.