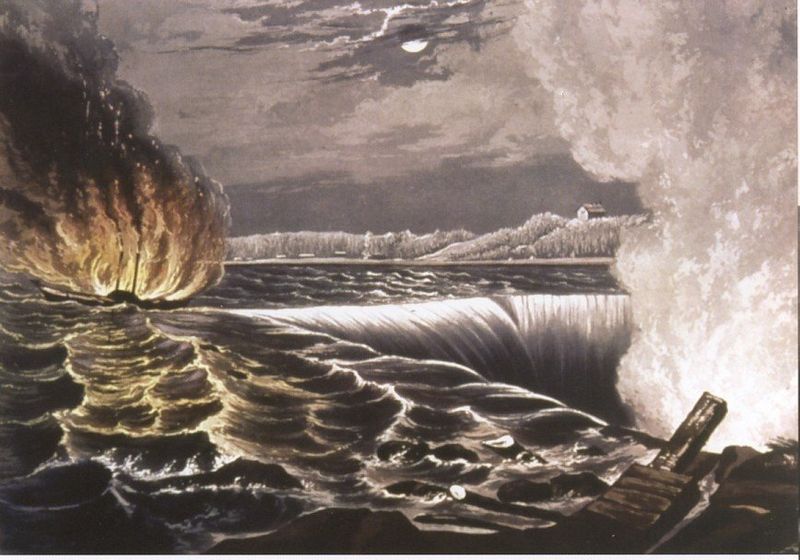 Niagara River, December 19, 1837 - American steamship, Caroline, was burned by the British, and cut loose to plummet over Niagara Falls, [more]

In December1837, Canadian rebel leader, William Lyon Mackenzie, set up headquarters on Sailor Island, on the Canadian side of the Niagara River, and declared himself head of the provisional government of the Republic of Canada. The rebels were joined by at least 200 enthusiastic Americans. They set up artillery on the Island and began shelling the British at Fort Erie. To supply the forces with food and ammunition, the rebels employed the American owned steam ship, the Caroline.

The British Commander, Colonel Allen Napier McNabb, believed that a rebel invasion was imminent, and that the Caroline would be used in the invasion. He asked Captain Andrew Drew if he could cut out the Caroline. When Drew responded that nothing could be easier, McNabb said, “Well, go and do it.”

Drew called for volunteers who “would follow him to the devil.” He got many takers, and on the night of December 19, 1837, Drew led a group of sixty men in rowboats, across the Niagara River. Captain Drew and his men boarded the Caroline, and after a brief skirmish, during which Drew himself, killed Amos Durfee, an African American crewmember of the Caroline, the British took control of the ship. The sent the rest of the Caroline’s crew ashore, then cut it loose from the moorings. They set fires at four places on the ship, then towed it into the current, where it would be carried over Niagara Falls.

This is how the scene as described in 1839, in an American pamphlet titled, “An Address Delivered at Niagara Falls, on the evening of the twenty-ninth of December, 1838, the anniversary of the burning of the Caroline:”

“The scene now became one of awful sublimity. The Caroline was in flames, and the resistless flood was bearing on her on toward the cataract. As the fires curled about her, her engine began to work, by the heat of the burning vessel, and the pitchy flames threw a red glare on the wild scenery around her. It showed the wintry forest, and glowed upon the waters; it revealed the rebel island, and the barracks of the British soldiers. Onward the burning vessel was borne, and nearer and nearer the mighty precipice. From one side she was viewed with exultation; from the other, with deep threats of vengeance; and as she neared the foaming gulf, the hell of waters, they tell of dark forms that were seen amid the flames and of death shrieks, that rose shrill and piercing above the noise of the rushing waves. Still she rushed on, and still the scene increased in grandeur, until her burning timbers were extinguished by the flood, and a few blackened fragments, thrown up on the shore were all that remained of the ill-fated Caroline.”

Early reports said that the Caroline went over the falls with over a hundred men still aboard. In fact, the ship was empty; all except Amos Durfee had gotten off safely.

Neither the United States nor Great Britain was anxious for another confrontation so the matter was settled with discreet diplomacy. Captain Drew was tried in a New York State criminal court for the murder of Amos Durfee, but he was not convicted.

But the burning of the Caroline became a rallying cry for the people of New York State, and the ranks of the Patriot Hunters grew rapidly. Amos Durfee was the first casualty of the Patriot War; he would not be the last.