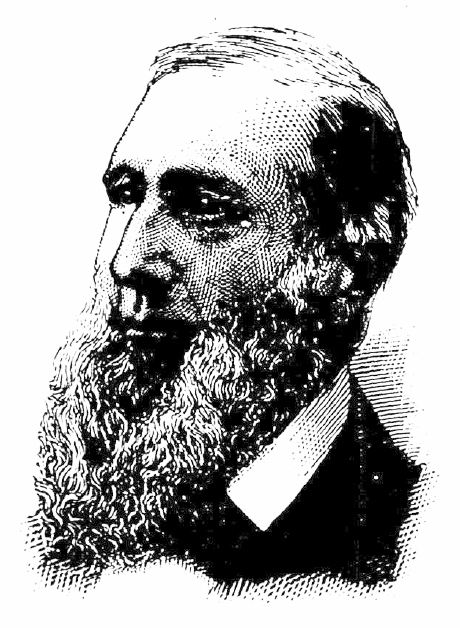 In Kingston, New Hampshire, Edward Sanborn was known as a public minded citizen and a generous supporter of education and religion. In Boston he was a ruthless businessman, a libertine and brothel keeper. His double life remained a secret until he was found dead in one of his West End whorehouses on August 4, 1885.

Edward S. Sanborn was born in 1818 to a prominent family in Kingston, New Hampshire. Though he never officially gave up his residency in Kingston, around age thirty Sanborn left for Boston to seek his fortune. In retrospect it appears that from this time forward he deliberately intended to lead a double life. He took up with prostitutes; but just visiting a brothel was not enough for Edward Sanborn, he had to own one. Using money inherited on his father’s death Sanborn joined with a group of women to open a house of ill repute in Boston’s West End.

When in Kingston, Sanborn regularly attended the Congregational Church. He donated generously to the Congregationalists but also gave freely to the Universalists and Methodists. In Kinston he was a great supporter of churches saying, “They are necessary to keep the boys and girls out of deviltry.” Though he spent more of his time in Boston, Sanborn was so well liked in Kingston that he was elected as their representative in the state legislature.

In Boston, however, Sanborn was not well liked. He was an unscrupulous businessman who “insisted on realizing more for his money than anyone else could get.” He was also a notorious miser who would rather walk a mile and a half than pay a horsecar fare. But it paid off—before long he owned at least three profitable brothels in the West End.

Around 1868 Sanborn met in Boston, Miss Julia A. Hilton a pretty nineteen year old girl from Maine. They began living together at his house on Lyman Street; to the world she was his housekeeper, but in fact she was his mistress and the manager of the brothels. Miss Hilton possessed the same business acumen as her lover and soon had amassed a small fortune of her own.

In his sixties, Sanborn began to concern himself with how he would be remembered after death. He had a monument erected in a Kingston cemetery where he and Julia Hilton were to be buried side-by-side. At the time he was peeved with Kingston for not reelecting him to the legislature so left the town nothing in his will. Instead he left $40,000 to Dartmouth College and the remainder to his sisters and to ex-Governor Noyes of Ohio who had been a classmate many years earlier.

He soon had a change of heart, realizing that memory of his gift to Dartmouth would last only as long as it took to cash the check. Instead he set out to build and endow an elegant brick and granite school building in Kingston, to be called the Sanborn Seminary. Miss Hilton would fund the school’s library. Life-sized marble busts of each donor would be displayed over a plaque reading:

This seminary was founded and endowed and this building erected by Edward Stevens Sanborn in token of his regard for his native town and his appreciation of the impotence of education. The library was presented by Julia Ann Hilton.

Edward Sanborn had not only changed his views about Kingston but about his relatives as well. He drafted a new will cutting off all but one half-sister to whom he left a small annuity. He gave $5,000 to the Congregational Church of Kingston and $2,000 in trust for the poor women of Kingston “who the selectmen may best adjudge entitled to the benefit by their industry and virtue.” The rest of his estate, over $200,000 was to go to the Seminary.

Julia Ann Hilton died in April 1885 leaving Edward Sanborn devastated. He took sick and never recovered, dying himself on the following August 4. Sanborn’s secret life was revealed and the press referred to him as a “moral leper” and a “degraded miser.”

These two deaths set off a particularly unseemly legal battle over the ill-gotten gains of the brothel keepers. Hilton’s will left between $1,000 and $2,000 to her mother and to each of her siblings. The remainder, over $80,000, she left to Edward Sanborn. Her family challenged this will on the grounds that Edward Sanborn had held undue influence over Julia Hilton. Sanborn’s family joined with Dartmouth College to challenge Sanborn’s last will claiming that he was not in his right mind when he drafted it. In Kingston, the now finished Sanborn Seminary building stood vacant waiting to see if funds would be available for its operation.

The Hiltons agreed to join their case with that of Sanborn’s relatives and let both matters be settled by the state of New Hampshire. A probate hearing was held the following January in Exeter, New Hampshire. Though it was shown that Sanborn’s mind was failing toward the end, the symptoms did not appear until after the death of Julia Hilton; long after the will was drafted. Both wills stood intact and the bulk of both estates went to the Sanborn Seminary.

Edward Sanborn was buried under his memorial in Kingston, New Hampshire, but Julia Hilton was not buried beside him. Her relatives did not follow her wishes and took her body back to Maine. Sanborn was too sick following her death to do anything about it. Sanborn Seminary was opened in 1888 and continued operation until 1966. The building still stands and is owned by the town of Kingston, New Hampshire.