A Ghastly Table. | She Was Bug Crazy. 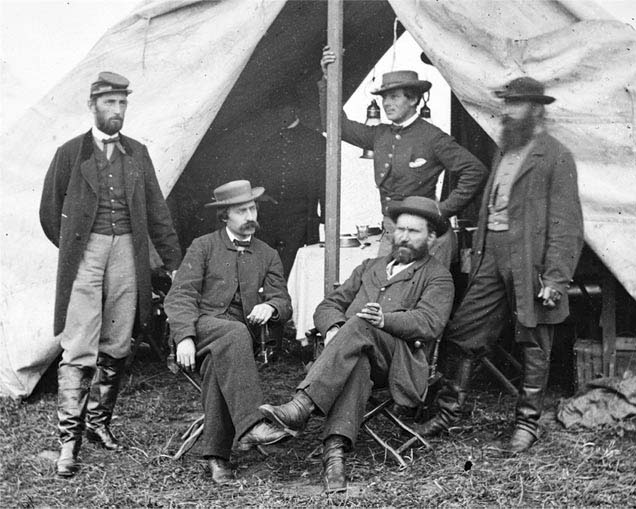 This is believed to be the only photograph of Kate Warne, America’s first female detective  (standing behind Allan Pinkerton.)
Forty-seven years before any American police force employed female investigators, Allan Pinkerton hired a woman operative for his fledgling detective agency. In 1856, Kate Warne, a twenty-three-year-old widow, answered an advertisement in a Chicago newspaper and was interviewed by Pinkerton for the job of detective. At first, Pinkerton was taken aback; a female detective was simply unheard of. Mrs. Warne argued that a woman could be “most useful in worming out secrets in many places which would be impossible for male detectives.” A woman can gain the confidence of wives and girlfriends of criminals, and learn their secrets, and men become braggarts around women and would sometimes reveal too much. Pinkerton was convinced, and, against the recommendations of others in the organization, he hired Kate Warne as a detective.
Pinkerton later described her this way:

"She was above the medium height, slender, graceful in her movements, and perfectly self-possessed in her manner. I invited her to take a seat, and then observed that her features, although not what would be called handsome, were of a decidedly intellectual cast. Her eyes were very attractive, being dark blue, and filled with fire. She had a broad, honest face, which would cause one in distress instinctively to select her as a confidante, in whom to confide in time of sorrow, or from whom to seek consolation. She seemed possessed of the masculine attributes of firmness and decision, but to have brought all her faculties under complete control." 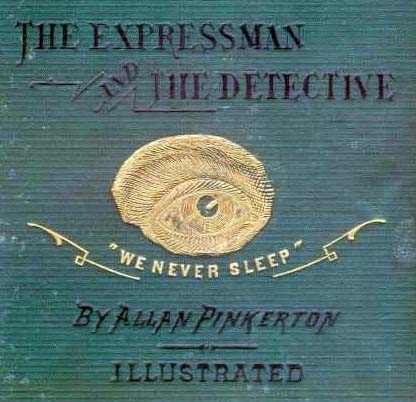 Kate Warne soon proved herself to be indispensable. In 1858 the Pinkerton Agency was hired by Adams Express in Montgomery, Alabama, to capture a thief who had stolen $40,000 from a locked pouch somewhere between Montgomery and Augusta, Georgia. Warne contributed to the case by gaining the confidence of Mrs. Nathan Maroney, wife of the suspected thief and obtaining information from her. The thief was convicted and all but $400 of the stolen money was recovered. The story was published by Pinkerton as The Expressman and the Detective, the first of series of books based on Pinkerton’s cases.

Kate Warne’s most important case was “The Baltimore Plot” to assassinate President Lincoln. The Pinkertons had been hired by the Philadelphia, Wilmington and Baltimore Railroad, to investigate the possibility of sabotage by secessionist groups. Warne was one of five agents sent in February 1861 to Baltimore, a hotbed of secessionist activity. Posing as a wealthy southern belle, Kate Warne was able to infiltrate social gatherings. She acquired information confirming not only the secessionist’s plan to sabotage railroads but an imminent plot to assassinate the president in Baltimore.

President-elect Lincoln would be traveling from his home in Springfield, Illinois to Washington, D.C. for his inauguration. The trip involved changing trains in Baltimore, traveling about a mile by carriage between stations. This is when the assassins planned to strike. Dubious at first, the president was finally convinced by Pinkerton of the danger, but because of scheduled public ceremonies in Harrisburg and Philadelphia, he did not want to change his travel plans.

A new plan was put into place by the Pinkertons, including code names for the principals—Pinkerton was “Plums,” Lincoln was “Nuts,” Kate Warne used two aliases, Mrs. M. Barley (M.B.) and Mrs. Cherry. Warne made arrangements for the president, incognito, to take a different train from Philadelphia. President Lincoln disguised himself as an invalid, and Kate Warne posed as his sister. They had adjoining berths in the sleeping car out of Philadelphia. Warne remained awake and alert all night until the train reached Washington. Legend says that the Pinkertons’ motto “We Never Sleep,” was inspired by Kate Warne’s sleepless train ride. 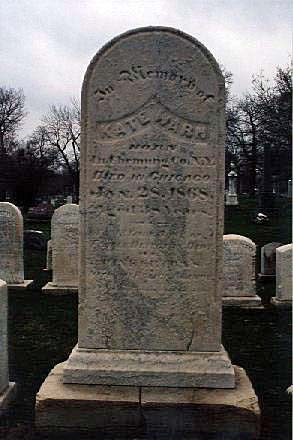 Warne was an effective Union spy during the Civil War, and after the war continued as an active detective, as well as managing Pinkerton’s female detectives. Kate Warne and Allan Pinkerton would often pose as husband and wife during investigations, and it was rumored that they were also clandestine lovers. Kate Warne died suddenly of pneumonia in on January 28, 1868, with Pinkerton by her bedside. She was buried in Pinkerton’s family plot in Chicago’s Graceland Cemetery.