One of the most thrilling disasters at sea that has happened for many years.
More...
February 26, 2018 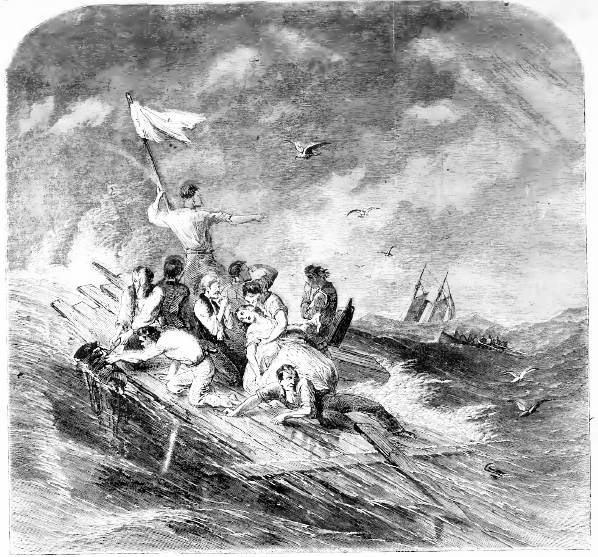 One of the most thrilling disasters at sea that has happened for many years. [more]

From a sketch by an officer of the gunboat Florida, we give an engraving of one of the most thrilling disasters at sea that has happened for many years, the wreck of the brig Titania which left Philadelphia on the 9th day of Oct., bound for Mobile, with a cargo of coal and hay. On the 13th she encountered a heavy gale which cause her to spring a leak. Both her pumps were manned, but in spite of every effort the water rapidly gained, even though all her deck load was thrown overboard. All hands worked with desperate energy to keep her afloat, but after two days of almost superhuman labor the water was found to be 11 feet in her hold and all hope of saving the vessel was dismissed.

A raft was rapidly constructed of about 10 feet square, and on the 16th the passengers and crew, 10 in all, embarked. There was one woman in the party. Two hours after leaving the ship down she went, and the luckless people upon the raft were tossing about at the mercy of the winds and waves. The weight upon the raft sunk it one foot below the waves, and what was not washed away was saturated thoroughly. For 24 hours they tossed about thus until, in latitude 32 degrees 20 minutes, longitude 74 degrees, they were found by the U. S. gunboat Florida, Lieut. Maies commanding, who took the starving party on board, helpless and almost lifeless form exposure.

Sailor-like, no sooner were the shipwrecked on board that a subscription was raised for them, which amounted to $361, of which one-third was awarded to the female passenger, and the balance divided among the crew.