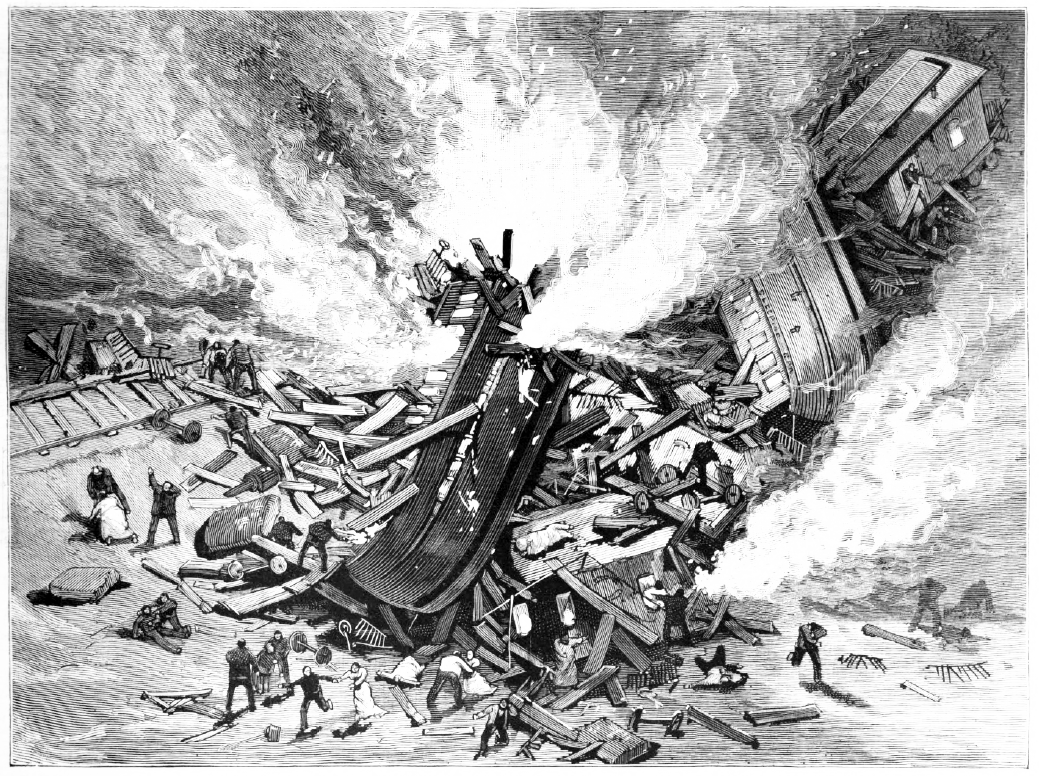 California. – The disaster on the Southern Pacific Railroad at Telegraph Pass, January 19th.

[more]One of the most terrible railroad disasters on record occurred on the Southern Pacific Railroad, near Tehachapi, Cal., about midnight on January 19th. The road at this point crosses the mountains through a pass, after having toiled up a grade of 105 feet to the mile for twenty-six miles. While the express train which had left San Francisco the day before was stopping at the station on the summit to detach an extra engine, it broke loose and started down the incline. The train gathered headway quickly, and was soon dashing down the grade at the rate of a mile a minute. At a sharp curve of the road the coach and smoker, where were ahead, broke the coupling and separated from the rest of the train, making the turn safely. The sleeping-cars and the mail, express and baggage cars were dashed against a high bank and then thrown back, rolling down an embankment. The lamps and stove at once set fire to the wreck, which was instantly in a blaze. The passengers in the sleeping-cars had retired, and had scarcely been awakened by the terrible speed with which the train dashed down the mountain before the crash came. A few escaped uninjured, or with only slight bruises, but the rest were either killed outright or burned to death in the flames. The night was intensely cold, and the point where the disaster occurred was a considerable distance from any settlement, so that little could be done for the sufferers until help arrived from Tehachapi.

In some instances a few handfuls of whitened bits of bones were all that remained of what had been a human form, and it was with great difficulty that the remains of several victims were identified. The number of dead is believed to have been thirteen, of whom the most prominent was the wife of ex-Governor Downey, of California, while several other were badly injured.

The disaster was at first attributed to carelessness of the train hands. It was said that the air-brakes had been taken off, and the men who tended the hand-brakes were away from their posts, one attending to switching the engine, and the other relighting his extinguished lamp. The railroad officials, however, declare that the accident was the result of an attempt to rob the express car. They claim that the hand-brakes were properly set by the brakemen, but that, while one of the was escorting a lady to the station, some miscreants let off the brakes and started the train down the grade in order to get it away from help and in a position where the express car could be robbed. Being inexperienced, they lost control of the train, and the disaster occurred. Some support is lent to this theory by the fact that when the train drew into the station two men were seen there who were subsequently found dead in the wreck, and who are as yet unidentified.