A young girl hurled from a Fulton ferry-boat, New York, by a jealous wife, who passes the act off as an accident.
More...
March 12, 2019 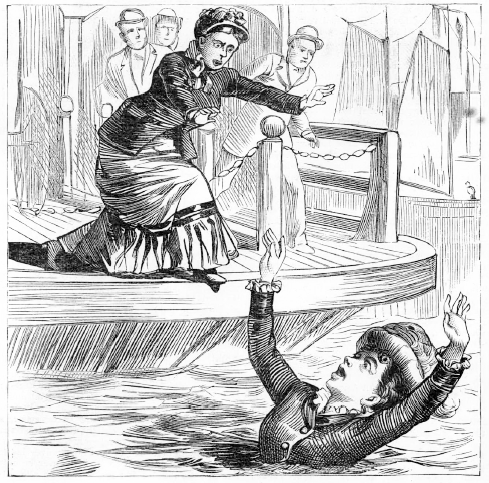 A young girl hurled from a Fulton ferry-boat, New York, by a jealous wife, who passes the act off as an accident.

Brooklyn romance always takes queer sensational shapes, and here is the latest. On the 2d inst., at 5 P. M., two ladies came tripping down the bridge at Fulton Ferry after the gates had been closed and when a crowded boat was just leaving the slip. The stouter of the two stepped aboard first, and when her slender young companion attempted to follow her she interposed and delayed so that the girl had but a slight foothold on the moving boat. Then turning suddenly she gave a sly push that tumbled her companion overboard. The girl fell into the water, rigged just as she was in the height of the spring fashion. A wild excitement prevailed on the boat, and was not allayed until it was seen that the bridgemen of the ferry had fished the young woman with a boat-hook, limp, wet, insensible but, safe. The lady who had been her companion found a private coach of the most "tony" description waiting for her at the ferry on the Brooklyn side, and entering it was driven away without any inquiry being made. A scandal is said to underlie this event. The stout lady, it is rumored, is the jealous wife of a prominent physician, and the ducked young beauty was guilty of flirting with the sawbones and falling under suspicion of doing something worse.