Hazing at the Stock Board | The Girls Biffed Each Other 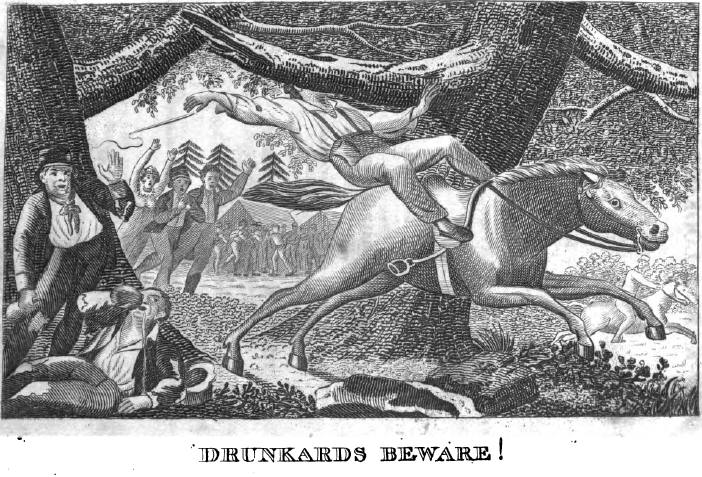 "Betwixt the saddle and the ground,
Mercy I sought and mercy found,"

...was the favourite song of poor Andrew Lipscomb, Halifax Co., Va.; But returning half shaved, from a regimental muster, he gave his horse the lash, and staving through the woods like a huntsman run mad, was dashed with such violence against a tree, that his brains gushed out. - The Drunkard's Looking Glass, 1818[more]

The temperance movement was a strong and growing force throughout the 19th century and though it never quite caught up to saloon movement, it left behind volumes of literature promoting the virtues of sobriety.  Among  the most prolific of the temperance writers was the Reverend  Mason Locke Weems.

Parson Weems was a self-published author and itinerant book vendor who specialized in morality tales and romanticized American history. He is best remembered for writing The Life and Memorable Actions of George Washington which included the story, invented whole-cloth by Weems, of Washington and the cherry tree. His most famous temperance work was The Drunkard’s Looking Glass (with the long but accurate subtitle: reflecting a faithful likeness of the drunkard, in sundry very interesting attitude : with lively representations of the many strange capers which he cuts at different stages of his disease As First, When he has only "A Drop in His Eye;" Second, When He is "Half Shaved;" Third, When He is Getting "A Little on the Staggers or So," And Fourth And Fifth, And So On, Till He is "Quite Capsized;" Or "Snug Under the Table With the Dogs," And Can "Stick to the Floor Without Holding On.")

The Looking Glass begins with the following “Golden Receipts against drunkenness:”

1. Drink no longer water, but use a little wine for thy stomach’s.sake. Also, cyder, ale, beer, etc.
2. Never fight duels. Nine times in ten the memory of the murdered drives the murderer to the bottle.
3. Never marry but for love. Hatred is repellent; and the husband saunters to the tavern.
4. Provide against Old Bachlorism. Age wants comfort, and a good wife is the second best in the universe.
5. Never stand surety for a sum that would embarrass you. And if you want, suffer a little rather than borrow, and starve rather than not pay; for debts and duns have filled the world with sots.
6. Hot coffee in the morning is a good cure of dram craving. And a civic crown to him who will set the fashion of coffee at dinner.

It then describes the three stages of drunkenness:

The story of young John Dermot illustrates the Frisky or Foolish stage:

The Frisky or Foolish Stage

The kingdom of Ireland, famed for handsome and sprightly youth, has seldom sent forth a young gentleman of a finer mind, in a fairer form than Mr. Dermot. Nor was ever a young stranger more idolized than he was, by the youth of Petersburg, who followed him in crowds, to hear the magic of his wit, and the music of his tongue. But ah! what avail all the advantages of genius and education, if unguarded by the virtues of sobriety! For lack of these, what countless thousands, who, in the splendour of their morning talents, had promised long days of glorious singing to the world, have been suddenly snatched from their orbits by the ruthless hand of Drunkenness, and quenched in total darkness for ever!

This was awfully illustrated in the early fate of Mr. Dermot.

The prologue of his tragedy was laid at a public dinner, in Petersburg. Mr. Dermot sat at the head of the table; the fond partialities of the company had placed him, though a foreigner, in that seat of honour. Besides this particular call on Mr. Dermot for good humour, others of a more general nature were not wanting. The table was loaded with a profusion of animal and vegetable dainties, enlivened with wines and fruits. It was also surrounded with gentlemen of different countries, French, English, Irish, Scotch, and Americans, all ranged around in smiles of social glee. No proud stars were seen glittering on the breasts of some to over-awe the rest, nor in opening his mouth, did any of the company feel alarmed lest he should mistitle a lord, and so provoke his ire. But all "free and easy" they sat, as a band of equal brothers feasting together, at the table of a common parent's bounty. Surely, then, if ever, was the season for these favoured gentlemen to kindle high the social affections and spurning all national prejudices, to strive who most should honour his dear native country by exhibiting the fairest models of true politeness. And such, 1 am told, was their style of behaviour, all FRIENDSHIP AND HARMONY, at the commencement of the feast; and such, no doubt, would have been its continuance and conclusion-but ah! Drunkenness, the cruel spoiler, came.

The first course ended and a bumper round being called for, the decanters were all unstopped, and forth with melodious goggle, stepped the ruby coloured Madeira. Bumper followed bumper so fast that the fair stopping places of decorum were soon past by; meek-eyed Reason was dethroned, and all the rabble passions set up to tyranize. In this frolic and fury of the table, nothing would serve but they must introduce politics, a subject certainly as unfit for such a company as a lighted match for a powder magazine. And the explosion was pretty nearly as sudden and terrible. For no sooner was mention made of the French aggressions on the American commerce, than Mr. D. in principle a United Irishman, and therefore in heart a flaming American, seized the subject, and with the impetuous eloquence of a Curran denounced the French-denounced them as the greatest miscreants on earth; from Bonaparte to the shoe-black, Villains, all Villains! and concluded his speech with an oath by his God, that he did not believe there was an honest individual in the nation.

Unfortunately for Mr. Dermot, close on his left sat a French gentlemen, whose sallow cheeks were instantly turned to crimson, but curbing his passion, he turned to Mr. Dermot and with great politeness said, "Sir, I hope you do not include me among the rest of my dishonest countrymen."

"Who are you, sir," replied the wine-heated youth; "who are you? I don't know you, sir. I did not know there existed on earth such a creature as you."

"Very well sir," replied the Frenchman very coolly, "you shall know me perhaps before Iong;" then shoving back his chair, he got up from the table and went home. A challenge was sent the next day and accepted; and on the day following they met on the fatal field, At the first trial of the pistols, Mr. Dermot fired clear, but missed. The Frenchman snapped. On the second trial, both fired clear; when the former received a bullet in his heart, and died without a groan.

Thus perished the elegant John Dermot Esq. the early victim of wine, though taken but in a few glasses beyond the temperate point. But though dead he still lives; and his once eloquent tongue, though now but dust, yet utters an awful voice,

"Oh tender youth! turn here an eye!
What vou are now, that once was I;
What I am now, that you may be;
Then shun the sin that murdered me."

Weems, M. L.. The drunkard's looking glass reflecting a faithful likeness of the drunkard, in sundry very interesting attitudes : with lively representations of the many strange capers which he cuts at different stages of his disease .... 6th ed. Philadelphia?: Printed for the author, 1818.