A characteristic group, representing Chang and Eng, the Siamese Twins, with their wives and Children
More...
February 29, 2016 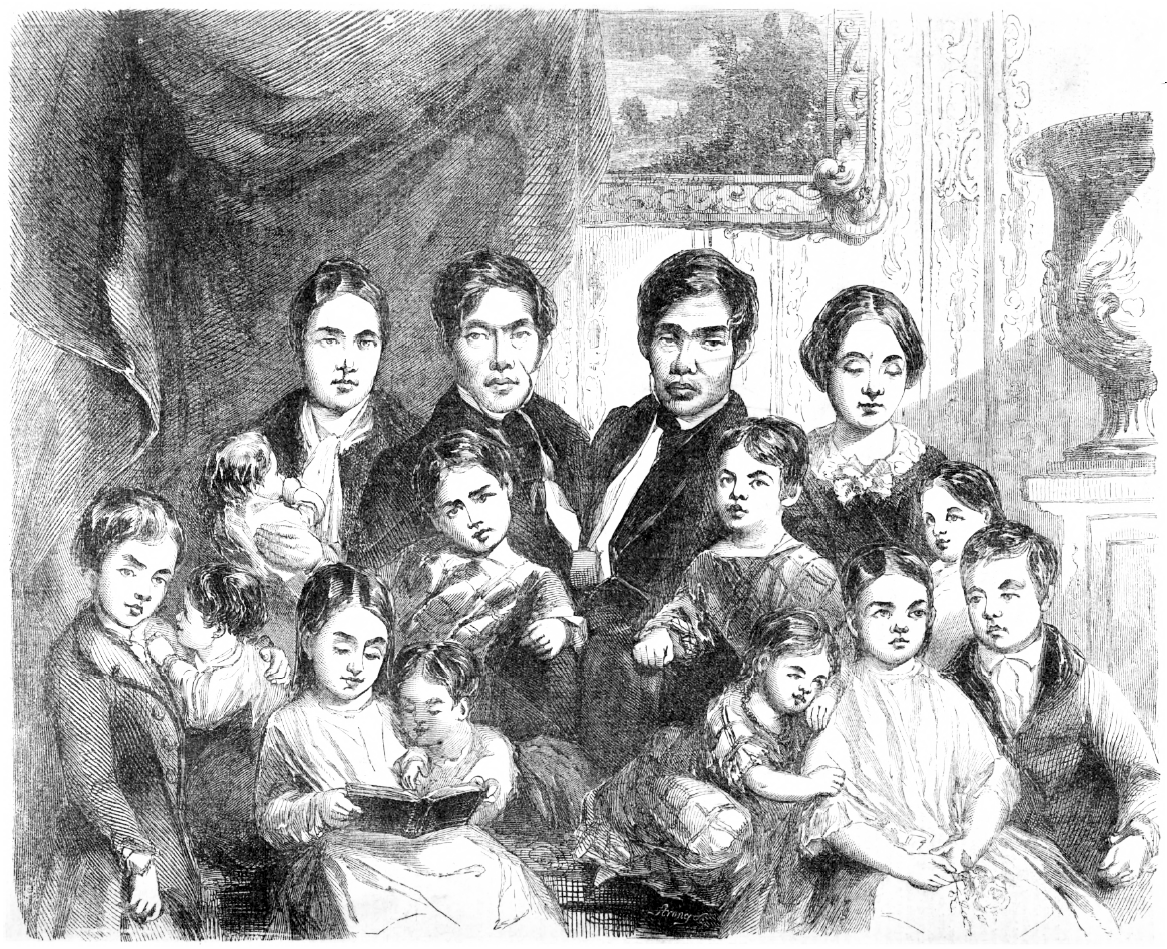 A characteristic group, representing Chang and Eng, the Siamese Twins, with their wives and Children. [more]

On the page herewith, we give a large and finely executed picture of Chang and Eng, the famous united Siamese Twins, who were born in the city of Meklong, in Siam, in May, 1811. They were brought to this country by the captain of the hip Sachem, arriving in August, 1829. They were at once brought before the public for exhibition, and during the ensuing twelve years, were visited by millions of people, taking, in the course of their travels, the United States, Great Britain, France, Holland and Belgium. They are united to each other by a ligature, or band, about three and a half inches in length, and eight in circumference. Formed at the extremity of the breast bone of each, and extending downwards to the abdomen. The upper part of the band is a strong cartilaginous substance; the lower part is soft and fleshy, and contains a tube or cavity, presumed tube about an inch and a half in circumference. The flexibility of this cartilage is so great, that they can readily turn those shoulders outwards which are together when standing in a natural position. Having secured a competence by exhibiting themselves, they settled in Wilkes County, North Carolina, but afterwards removed to Mt. Airy, Surry County, where they now reside. Soon after taking up their abode in this reason, they simultaneously became smitten with the charms of two pretty sisters, named Yates, and each selecting his partner, the four were made two with all due ceremony. This double union has apparently proved highly satisfactory to all concerned. The ladies are represented as amiable and interesting, while it is certain that the twins are devoted to their wives. At the present time, Mr. Eng has six and Mr. Chang five children, all of whom are apt scholars and remarkably well behaved. They are also very prepossessing in appearance, and are great favorites in the community where they reside. The illustration will give a perfect idea of the appearance of the families, every likeness being copied from daguerreotypes, taken especially for the purpose. In closing these remarks of the twins and their families, we say that they seem to be remarkably happy, enjoy good health, have ample means to procure not only the comforts but the luxuries of life, and bid fair, as far as human judgement may go, to live many more years of domestic happiness and comfort. They are both naturalized citizens of our country.