Allan Pinkerton, and the organization he founded in 1850, Pinkerton’s National Detective Agency, embodied all the traits that have come to be associated with the mythic American private detective. They were tough, honest, incorruptible, fair-minded, dogged and independent. The Pinkerton logo—a vigilant eye with the motto “We Never Sleep” –was the source of the term “private eye.” But not everyone has been pleased with Pinkerton’s work. Some detractors, then and now, have characterized the Pinkertons as little more than a private army for capitalists. 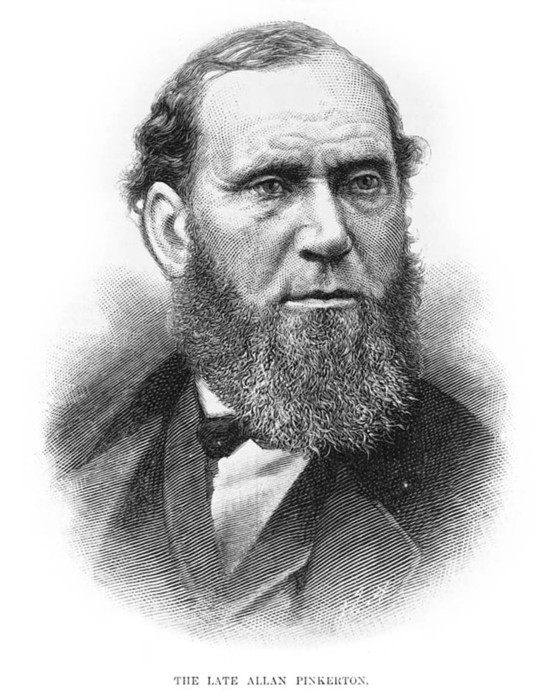 Pinkerton came to America from Scotland with his young bride at age 24 and set up a cooperage in Dundee, Illinois. After accidentally discovering a counterfeiting operation, Pinkerton contacted the sheriff of Kane County and assisted the sheriff and his men in arresting the counterfeiters. This series of events led Pinkerton to turn to a career in law enforcement and in 1849 became the first detective in the Chicago Police Department.

He left the police department less than a year later due to “political interference,” and after a brief but successful stint as Special Agent for the U.S. Post Office, Pinkerton opened his own detective bureau, Pinkerton’s National Detective Agency.  One of the company’s first clients was the Illinois Central railroad who had been plagued by train robberies. He was hired by the company’s vice-president, George McClellan; the contract was drawn up by Illinois Central’s attorney, Abraham Lincoln.

Pinkerton’s was not the first private detective agency in America. In an era with no national law enforcement and when state and city police forces were notoriously corrupt and inefficient, private forces had sprung up in most eastern cities. But these organizations tended to provide private substitutes for regular police functions such as recovering stolen goods.; Pinkerton’s was the first agency to specialize in the type of undercover operations commonly associated with modern detective work.

Pinkerton’s agency also differed from other law enforcement groups, public and private, in the high moral standards set for the organization and its operatives. In a document entitled General Principles Pinkerton outlined the company’s moral parameters: 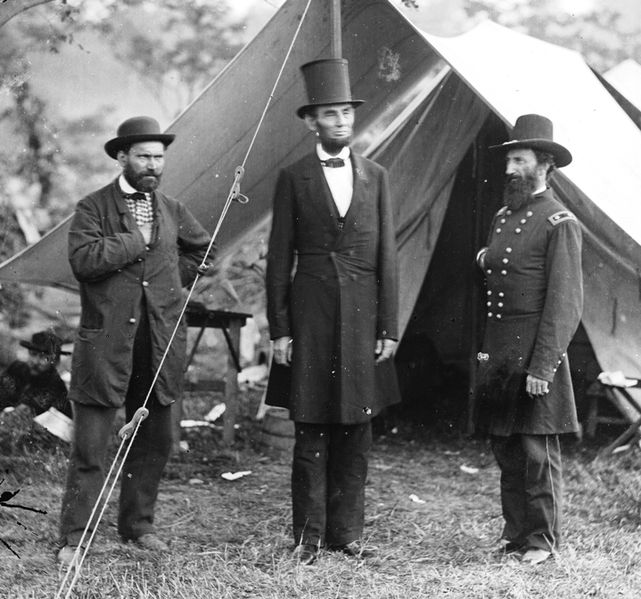 Following the Presidential election of his long-time associate, Abraham Lincoln, Allan Pinkerton uncovered a plot to assassinate the President-elect in Baltimore, en route to his inauguration. He convinced Lincoln to change his travel plans, probably saving his life. When the Civil War broke out, Pinkerton, who had always been an ardent abolitionist, rallied to the Union cause, volunteering his agency's services. He established the Secret Service, and supplied intelligence for another of Pinkerton’s old friends, George McClellan, now General of the Army of the Potomac.

After the Civil War the Pinkerton Agency, hired by railroad and express companies, actively pursued outlaw gangs and train robbers, such as the James gang and the Reno gang. “The eye that never sleeps” was well known to outlaws of the old west who had reason to fear the incorruptible and unyielding Pinkertons.

The Pinkerton name began to tarnish when the agency became involved in the labor struggles at the end of the 19th century.  In 1873 they were hired by the Philadelphia and Reading Railway, Coal and Iron Companies to investigate the Mollie Maguires, a particularly violent Irish-American secret society that had been terrorizing northeastern Pennsylvania in the name of labor reform. An undercover operation by the Pinkertons led to the arrest and execution of twenty Molly Maguire members. The question of whether these hangings were justified is still debated today.

In 1892, eight years after Allan Pinkerton’s death, the Carnegie Steel Company hired the Pinkertons to break a strike at the Homestead Steel Works, south of Pittsburgh, Pennsylvania. Workers opened fire on a barge containing 300 Pinkerton agents. The resulting battle lasted several hours and caused the death of three Pinkerton agents and seven strikers.  Though they were outnumbered ten-to-one the Pinkertons have been portrayed as the aggressors.

At the start of the 20th century, it became apparent that America needed a public law enforcement agency at the national level. In 1908 the Federal Bureau of Investigation was established, using Pinkerton’s National Detective Agency as its model. The Pinkerton agency still thrives today as Pinkerton Consulting & Investigations, a leader in the field their founder virtually invented.