Saloons and Houses of Ill-Fame. | Cowboys Lassoing the Ballet. 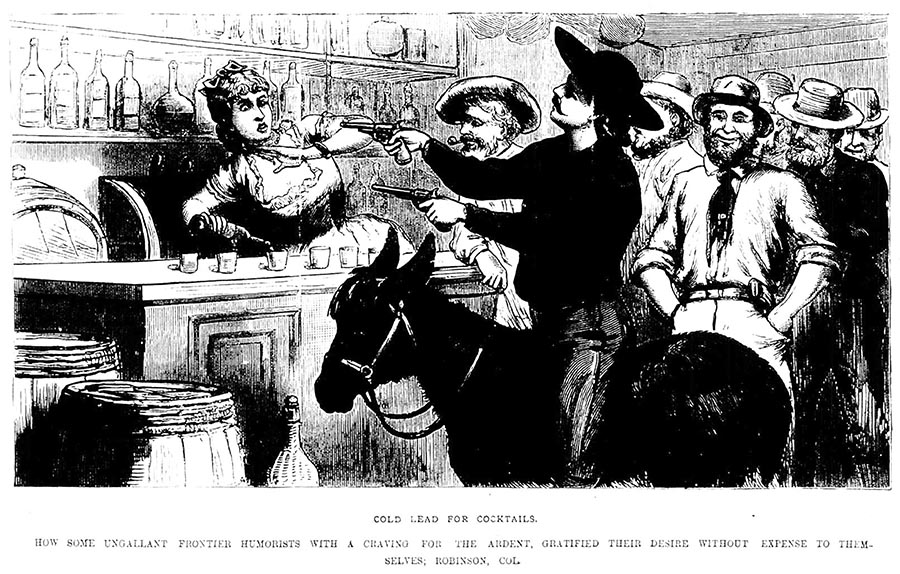 Pay-day at the mines in the vicinity of Robinson, Col., is always followed by a night of boisterous merriment. Last Saturday was no Exception to the rule, and a gang of the "boys," headed by Ed. Dolin, Jimmy Higgins, John Tye, Jerry Ryan and others got hold of a Jack mule or burro. Ed Dolan mounted the beast, and with his feet touching the ground, headed the procession. The others urged the animal along by pounding its buttocks with boards and cudgels. The gang made for a dance hall kept by two women named Jennie Stone and Nellie Williams alias "Buffalo Nell." Dolan rode astride the ass, made a charge on the bar, and presenting two cocked poppers, persuaded Buffalo Nell to set up San Juan cock tails for the crowd. About the time the gang were soaked, policeman Andy Purvin appeared on the scene, and a general stampede was made for the door. Boss Dolan and the ass went over a high side walk into a bank of snow, and it was only after a good deal of tumbling and much hard talk praying that they were placed on a solid footing again.