Had a High Old Time.

Had a High Old Time. 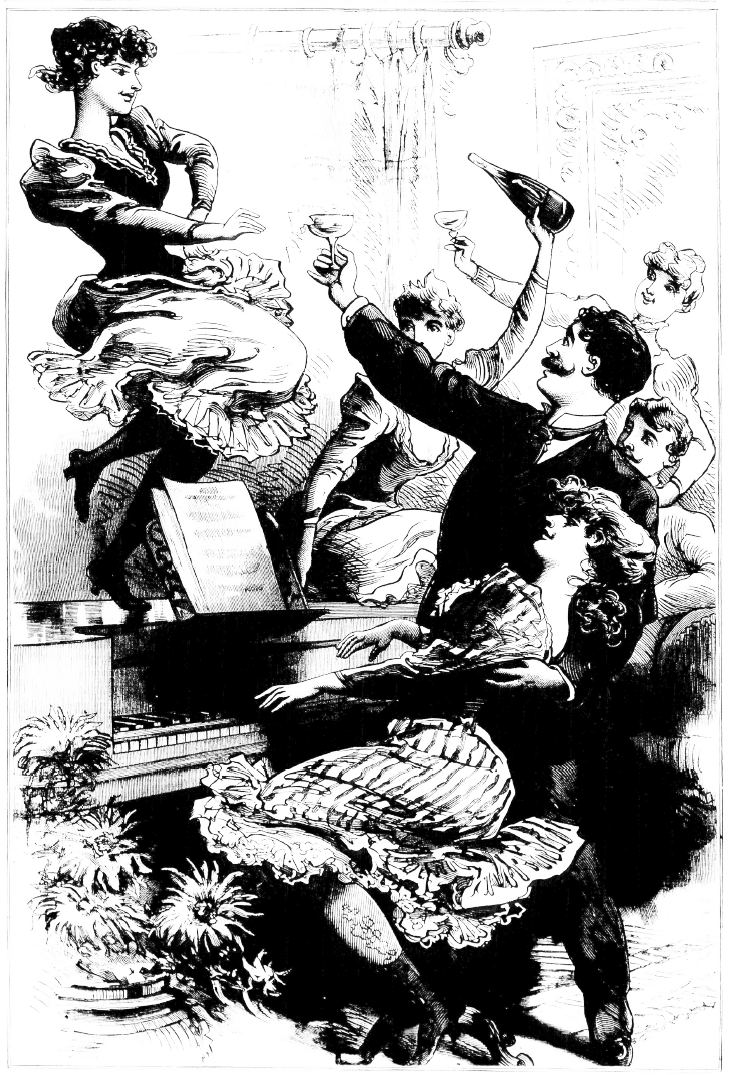 Dr. Wellington of Chicago, leaves her handsome home in charge of Frank Beaupre who proceeds to turn it into a disreputable resort.

Frank Beaupre of St. Paul inhabits a detective’s room at the Central Station, Chicago. Beaupre is the son of a one time millionaire grocer of St. Paul He is only twenty-six years old, but the life he has led for the past five years has made him look much older than he really is. His father was the senior member or the wholesale firm of Beaupre, Keogh & Davis, which recently failed for a large amount. The Beaupres have always moved in the best social circles of St. Paul, and Frank, the only son, was a welcome guest at fashionable receptions and dancing parties. A few months ago he was cast adrift by his father. He went to Chicago, and the little money he had was soon spent.

One afternoon in May, when he rang the door bell at 726 Washington Boulevard, he was emaciated from want of proper nourishment. His clothes were the worse for wear, and no one would have recognized him as Frank Beaupre, who use to lead the German at the swell parties in St. Paul. At 726 Washington Boulevard lives Dr. Gertrude G. Wellington, the wife of Attorney Wellington, of the Great Northern road. The Wellingtons used to live in St. Paul, and were neighbors of the Beaupres. When young Beaupre was on the verge of starvation he supplied to Dr. Wellington for assistance. He was clothed and fed and supplied with pocket money for weeks. He has shown his gratitude by stealing articles from the house and pawning them. This is why he is being detained at the Central Station.

On Aug 3. Mrs. Wellington and her two daughters went to Spokane Falls, leaving the Washington Boulevard establishment in charge of Beaupre. He promised faithfully that he would take good care of the premises and would have no companions. Before Mrs. Wellington was twenty miles from Chicago Beaupre and two of his friends were making things exceedingly lively in the Washington Boulevard mansion. When the Wellingtons arrived home last Friday morning they found the house in a state of disorder. It looked more like a beer bottling establishment than anything else. Empty bottles labeled “Export” and “Select” were scattered all over the house from the garret to the basement. There was a stack of bottles in the kitchen that bore silent testimony to the high old time Beaupre and his friends had enjoined during the absence of Dr. Wellington. Every room in the house had its quota of empty bottles and in all there were nearly 1,000.

When Mrs. Wellington left Chicago she discharged her colored cook, as Beaupre said he could get his own meals. The day after her departure Beaupre hunted up the cook, and told her that Dr. Wellington had given him permission to re-engage her. During the five weeks that Dr. Wellington was absent the cook use to come to the home every day and get the meals for Beaupre and his friends. There would be women to dinner, and orgies would continue until the dawn of the next day. Soon the neighbors got to talking and Beaupres was plainly told that unless the going and coming of that class of woman ceased he would be reported to the police. But the scandal grew. A neighbor investigated and found fourteen girls in the house at one time. They sat in a circle in the double parlor, wore short dresses, and smoked cigarettes. They had complete possession of the large mansion occupied every one of the twenty odd rooms in it, danced on the piano and fine furniture, trampled the rich portieres and rugs, and ruined almost everything.

Beaupre has written to his father for money to pay his obligations to Mrs. Wellington, and he hears from St. Paul he will be kept at the Central Station.