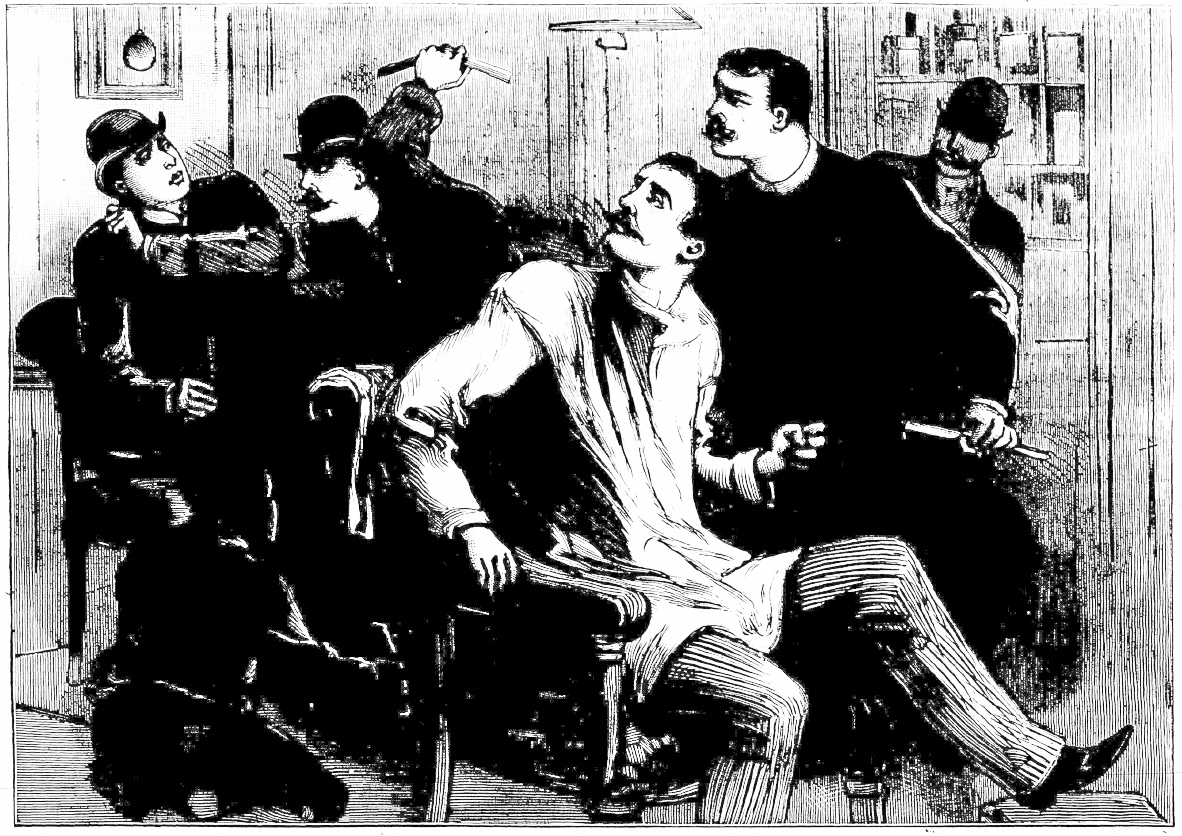 Tommy Shea has a run-in in a Boston barber shop which will no doubt prove his last one. [more]

Ever since the Kerrigan-Wallace fight, last Thursday night, John L. Sullivan has been on a racket, and had a good-sized jag on Saturday night. All day Saturday the big fellow and Tommy Kelly, a fighter of less renown; Tom Keefe, alias Shea, who has just finished a term of three years for highway robbery, and John Ryan, a Cambridge sport had been painting the town, visiting barroom after barroom and drinking at every place.

Rumor has it that Shea was angered by Sullivan’s actions at the Thursday night fight, and as soon as he got drunk he laid the big fellow with a gun. He was not so drunk, though, that he didn’t have a wholesome respect for the law, and if it was his intention to harm Sullivan he played his cards well.

But Sullivan wouldn’t get mad. Shea insulted him to a most outrageous unprovoked manner and kept at it so persistently as to give some color to the story of a plot to kill Sullivan. He wanted Sullivan to make the first assault, knowing that public opinion would secure his acquittal on the grounds of self-defense. Sullivan’s phenomenal streak of good temper perhaps saved his life He listened good-naturedly to Shea’s talk, and seeing the horrified look on the faces of all those present he played the magnanimous dodge to perfection.

The quartet made a round of the saloons, and at 6 o’clock brought up at Billy Haggerty’s barber shop. Haggerty is a candidate in the lower branch of the Legislature, and Sullivan is his right bower. It was not a very clean-looking set of men who filed into the barber shop in Sullivan’s wake, but all anticipated a general overhauling by hands that had become adept in the art of reducing swelled heads. There were two vacant chars, Sullivan made a bee line for one and stretched out for a nap, while the barber dashed on the lather and scraped the iron jaw of the big fighter. Ryan surrendered himself for similar treatment. Kelly was next and Shea was fourth on the list Shea didn’t seem to mind the delay; in fact, he seemed glad of the chance to use his  tongue more freely, and he walked up to the champion and “roasted” him even more savagely than before. Sullivan became impatient under the tongue lashing, and rising in his chair with his face covered with lather, he turned on the ex-convict and said:

Shea thought discretion was the better part of valor and turned his attention to the ex-pugilist. Kelly cleverly disguises his fifty-odd years by dying his mustache and plays the role of a young sport.

He had a reputation in his day of being the gamest light-weight in the ring, but he also has the reputation of being a bad man to tackle when his dander is up, owing to his weakness for the knife. Saturday night he reached the ugly stage of his drunk and was in no frame of mind to stand chaffing of any sort.

He was sitting in a chair, tilted back against the wall, waiting for the welcome call “Next.” Shea called to the bootblack, and sat down for a polish, but his tongue kept on wagging, and in a few minutes he had Kelly furious. He was too drunk to know his danger. Kelly didn’t say anything, but he jumped to one of the barbers, snatched the razor from his hand and made a lunge at Shea, and slashed him under the left side of the jaw, making a gash three inches long. It was deep, too, but escaped the big vein and artery. Sullivan was asleep and didn’t know what was going on until he heard a fight in progress behind him. Ryan saw Kelly swing the razor, and jumped from his chair to save Shea, but he was too late. He saw the blood fly, and then opening the door, kicked Kelly into the street. Kelly disappeared in the darkness. Shea was seen to be seriously wounded and Dr. McDonald was called to stop the flow of blood. Sullivan inquired as to the cause of the row, and then he too, walked out of the barber shop.

Kelly went to a lawyer and asked him whether he would “skip or surrender.” He was advised to go to the police station and upon being confronted by the dying man a sickening sight ensued.

Kelly is locked up.