Water witches who frolic with Neptune, no matter how cold his embrace.
More...
September 3, 2013

The “Prisoners’ March.” | A Bride’s Toggery. 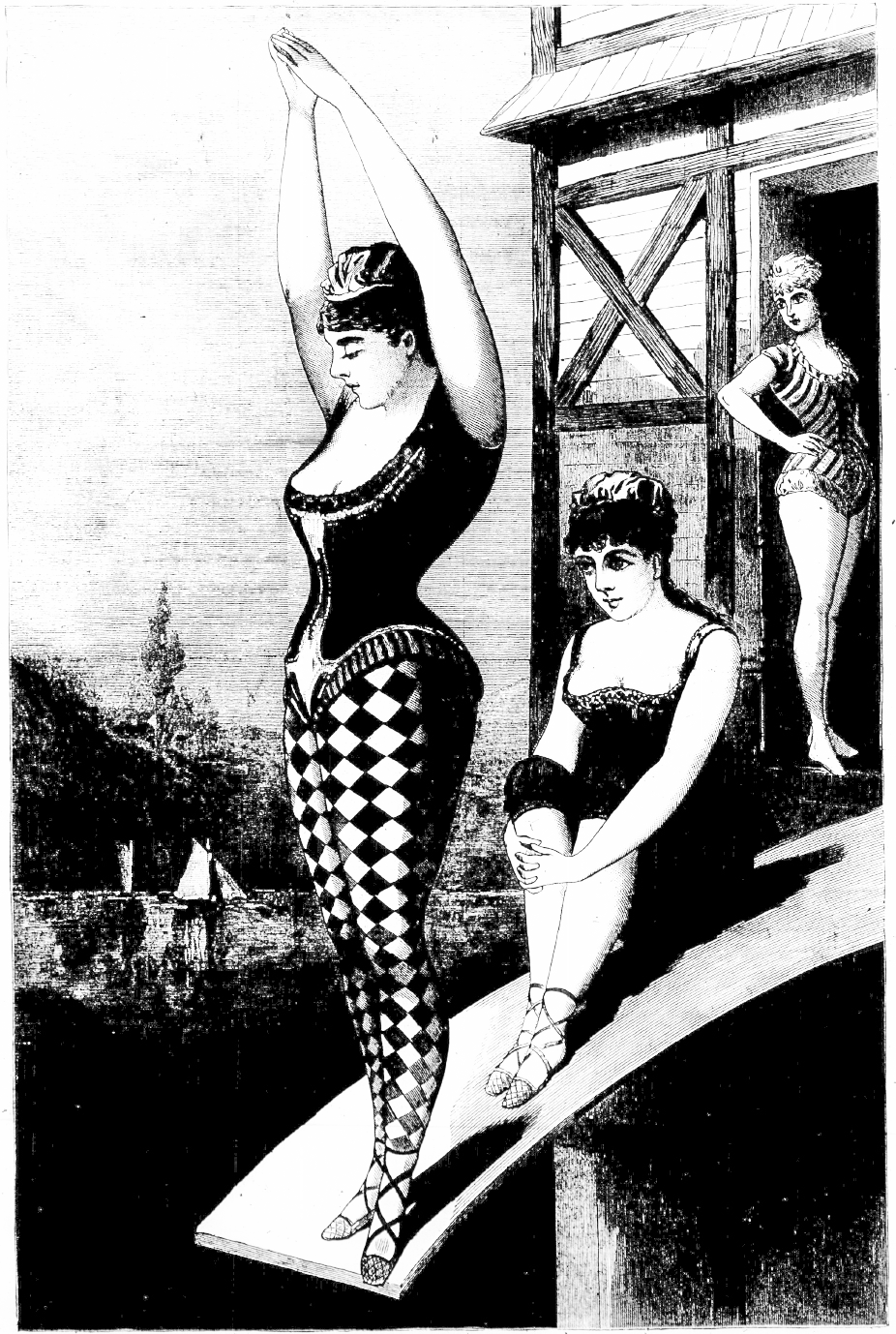 They Won’t Have a Man Around, and Still Enjoy Themselves—Diving as a Fine Art, With a Special View to the Exhibition of Pink Flesh and Pretty Hosiery.

The fair dwellers in some of the charming country sites on the shores of Long Island Sound have invented a means of enjoying themselves, whose novelty will probably recommend it whenever it becomes known before the season is over. In the course of a yachting cruise down the sound last week a Police Gazette artist enjoyed an admirable opportunity to obtain the sketch presented with this number.

The pictures explains itself. A long and elastic spring-board is flown from the gallery of a boathouse, itself built over deep water, so far out as to afford ample profundity for safe diving. The plank itself is some fifteen feet above the surface of the water and straight in advance of its end a light cork buoy is enclosed. The door of the boat house in the rear is open, giving the diver a run of some twenty feet for a start.

The result, seen for the first time, is, to say the least, startling.

An elegant figure clad in a tight-fitting bathing suit of the most improved French model, bounds out of the dark doorway, makes three or four leaps on the swaying plank and is then shot high in the air, a mere flash of striped hosiery and pink flesh, descending a parabola and landing, if she knows how to preserve her balance, with her pointed hands, into the water, clearing the surface like an arrow and vanishing at last in a little circle of boiling foam. The object of the divers is to leap beyond the anchored buoy as far as possible, and a regular record is kept of the distance of the leaps. After rising to the surface the fair swimmers paddle back through the piles on which the boat house is sustained and ascend a comfortable ladder to the club-room, for it is, again.

The boat house is the meeting place of the “Westchester Divers," as they call themselves, who consist of numerous wealthy ladies of the vicinity, with a sprinkling of well-known actresses and professionals in operatic walks.

It is a veritable female paradise, no men being admitted to the hospitalities of the establishment. “We can’t keep you away in your boat, of course,” observed the smiling president to the artist. “But we won’t permit you to land, and you are always glad to get over to the Point where they have excellent lager beer on tap. Are you not thirsty?” The artist considered the hint an excellent one, and took it. He is sorry to say, however that the charming president of the “Westchester Divers” is either no judge or she has never read Sapphire.