Fight of the Century!

Disguised as the Devil. | Burning of Josephine Farren, Dancer.

Fight of the Century!

Carson City, Nevada, March 17, 1897 – On St. Patrick’s Day, 1897, “Ruby” Robert Fitzsimmons challenged “Gentleman” Jim Corbett for the heavyweight boxing championship of the world. The fight in Carson City resembled the picture above for thirteen rounds, and then in round fourteen, Fitzsimmons knocked Corbett to the canvas to become the new world champ.

In March of 1897, much of the world had its attention focused on Carson City, Nevada, where “Gentleman” Jim Corbett would be defending his heavyweight championship against “Ruby” Robert Fitzsimmons. Billed as the "Fight of the Century," there was bad blood going in. Corbett had been refusing Fitzsimmons’ challenges for several years and at one point had nearly retired without defending his title, but Fitzsimmons had raised the necessary cash and Corbett finally accepted the challenge. Finding a venue for the fight had been a problem too. The sport was denounced as barbaric from pulpit and podium and most states had outlawed prizefighting. But Nevada, hit hard by the Depression of 1893 and the falling price of silver welcomed the crowds and their money.

The date set for the fight was March 17, St. Patrick’s Day. In Carson City, that night, Bob Fitzsimmons, the skinny, freckled, New Zealander, kissed his wife, Rose, and entered the ring a solid underdog. In the sixth round, Corbett had him bloodied, on his knees, but it was not enough. In the fourteenth round, Rose came to the ropes and shouted, “Hit him in the slats, Bob.”

Fitzsimmons punched Gentleman Jim at the bottom of the rib cage, knocking his wind out. The Gentleman hit the canvas and ten seconds later Ruby Robert Fitzsimmons was the heavyweight champion of the world.

The animated picture above comes from the Cincinnati Post, March 18, 1897. Their coverage of the fight included a strip of images across the bottom of the page:

The Post urged their readers to construct a kinetoscope to view the images. Kinetoscope is the name Thomas Edison gave his early, single viewer motion picture projector, but a homemade kinetoscope is  a slotted, rotating cylinder used to view a series of pictures as an animated image 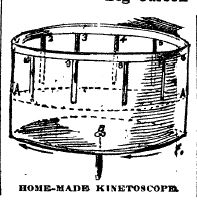 Before now, only a handful of industrious, 19th century, Cincinnati boys, who actually built a kinetoscope, could see Corbett and Fitzsimmons duke it out round after round. But now, with the miracle of digital animation, everyone can see it without lifting a finger. That’s progress.