J. I. Lighthall, better known as the Diamond King, was a charismatic showman and a master of marketing, but he was also a dedicated healer.
More...
December 4, 2012 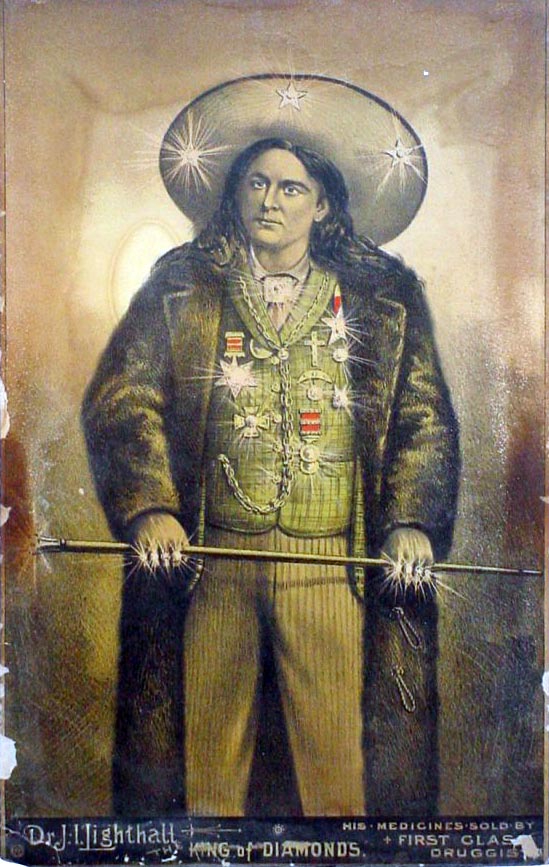 By the end of the nineteenth century, hundreds of self-proclaimed doctors crisscrossed America in traveling medicine shows. Some led elaborate tent shows with dozens of performers using patent medicine sales to finance their productions. Other focused more on the medicine than the show.  J. I. Lighthall, better known as the Diamond King, was a bit of both—he was a charismatic showman and a master of marketing, but he was also a dedicated healer. 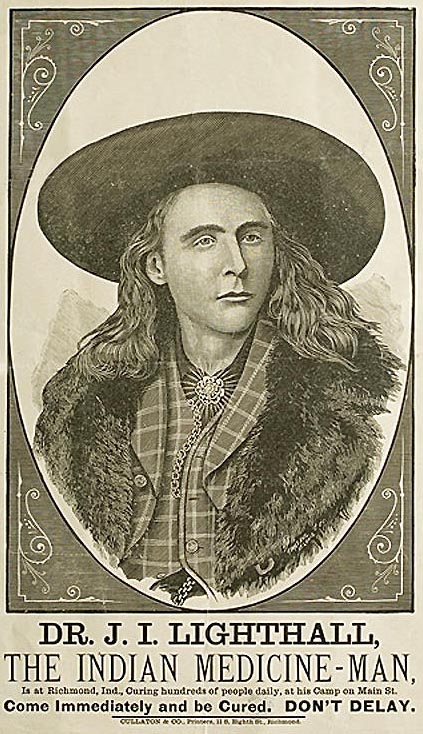 J. I. Lighthall was born in Tiskilwa, Illinois in 1856. He claimed to be one-eighth Indian and left home at age eleven bound for the Indian Territory where he learned “Indian Herbal Theory.” Lighthall decided that “what was good for an Indian certainly was good for a white man” and he considered it his duty to share his knowledge with the civilized world.

A natural born showman, J. l. Lighthall soon had one of the most impressive medicine shows in the country. At its height, Lighthall’s show would enter a town with a fabulous procession of cowboys and Indians, singers and other performers, a brass band, wagons pulled by decorated horses, and a brass-trimmed chariot.

Lighthall was boyishly handsome with long flowing hair. He was known as the Diamond King for the flamboyant diamond studded costumes he wore. Sometimes he would appear in an ankle-length sealskin coat with matching broad-brimmed hat; sometimes in a red velvet suit with buttons made from $5, $10 and $20 gold pieces and a Mexican sombrero trimmed in gold and silver.

As many traveling doctors did, Lighthall advertised painless dentistry, and he would open each show by pulling teeth, free of charge. As the brass band played, Lighthall, with incredible speed, went to work, tossing each extracted tooth high in the air. He claimed his home in Peoria had a walk paved with human teeth. 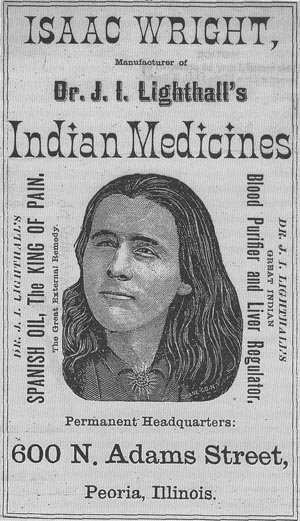 The Diamond King’s signature product was called Spanish Oil, The King of Pain, a blood purifier and liver regulator. The tonic, a brown liquid which reportedly smelled like a combination of turpentine and whiskey was made in Peoria by Lighthall’s mother and her third husband Isaac Wright and shipped to the Diamond King’s camp and to drugstores throughout the country. This is how Lighthall described it in verse:

A balm is hidden in the leaf,
That God has given for relief.
The Indians of the Western plains
Have found that they will cure our pains

So now the author does extend
A helping hand, an honest friend.
He’ll cure your aches, relieve your pain
If you will buy his King of Pain.

It’s made of barks, and oils and leaves,
And seldom ever man deceives.
It never fails to satisfy
And on it, friends, you can rely

In 1882, J. I. Lighthall published a book entitled The Indian Household Medicine Guide. In addition to being a comprehensive guide to Lighthall’s brand of herbal healing - including dozens of recipes - the book is a good layman's guide to conventional nineteenth-century medical knowledge. For those with health problems, the book included a list of health-related questions which could be answered and sent to Lighthall’s office. He would send his diagnosis and prescription by return mail.

In January 1886, J. I. Lighthall, twenty-nine years old, died of smallpox while performing in San Antonio, Texas. His passing was noted by newspapers throughout America.