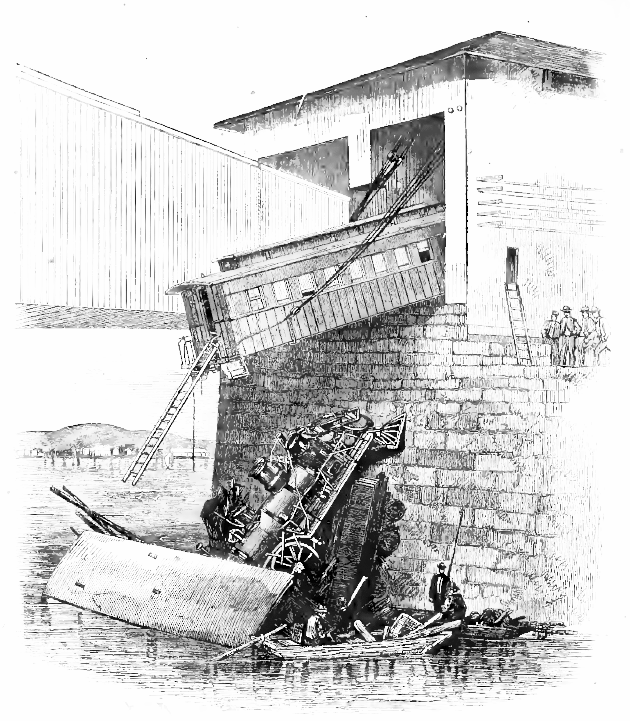 Packed Away in a Trunk. | A Duel on Horseback.

One of the most singular accidents we have ever been called on to illustrate came off on the Saratoga and Rensselaer Railroad on the night of the 23d of September. At about 7 o'clock the sleeping car train was on its way from Green Island at abort the time that the draw near the Troy shore was opened to admit the passage of the steamboat McAllister towing a raft. The red light was lowered to indicate that the draw was but still on rushed the train. As It passed the opening between the bridge on Starbucks Island, Joseph Lawrence, of the Central Road, saw that the draw was open, and shouted to the engineer to stop. He did not do so, and Mr. Lawrence, jumping on the last car, put down the brake, but could not prevent the result. He partially checked the train, to that the engine did not take the leap it otherwise would have done through the open draw. The passenger car followed, and in the fall was turned completely around, while the sloping car hung halfway, suspended has Mahomet's coffin.

It was very dark at the time, but the woodwork of the engine caught fire and lit up the scene with an unearthly glare, while the escaping steam made a deafening noise, suggestive of explosion and danger. River street was filled with people, and there was a general rush down the dock to the scene. Fortunately, the raft had floated down to the wreck, forming a bridge by which it could be reached.

An alarm of fire called out the people, who came to the dock by hundreds and thousands to gaze at the ruins amid the darkness. Efforts were immediately commenced to raise the suspended car. This was accomplished by jacks and tackles from the bridge, when the draw was closed, and travel won resumed.

The most remarkable part of the occurrences is that no lives were lost.