The Girls Biffed Each Other

Hazing at the Stock Board | Life in Boston and New York.

The Girls Biffed Each Other 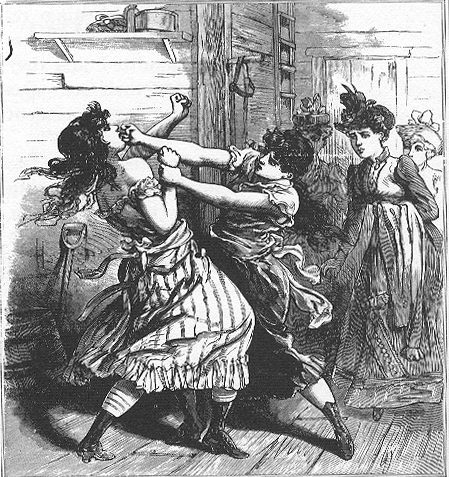 Two lovely daughters of two prominent Pleasantville, N.J., fami­lies have created a sensation in that town. Mabel Herbett and Mamie Brown nearly scratched each other's eyes out one day re­cently. It is true that they didn't bark and bite, but they came as near as they could without actually doing the dawgie act. From what we can learn, Mamie and Mabel were enamored of George Wood­ward and determined to settle their difficulties according to pugilistic rules.

The two girls consulted with their nearest friends, and decided that nothing but a personal en­counter could settle the question. A prize fight was arranged, the win­ner to have George.

The other girls went into it with a vim; that is, the lively girls did; and Pleasantville has a full quota of lively girls. They arranged to have the affair come off in an old barn on the edge of the village, and after studying up on the subject settled on a 16-foot ring. Three o’clock one Sunday morning recently was the hour set. Of course, only girls were admitted, and they had to sneak out of their bedrooms to attend in regular elopement style.

The bevy of beauties repaired to the barn and there had it out in grand style. The two combatants, when they got through with each other, had neither one won the prize, but both were considerably damaged.