Recruiting For Sin's Army | Terrible Struggle with Flame and Flood 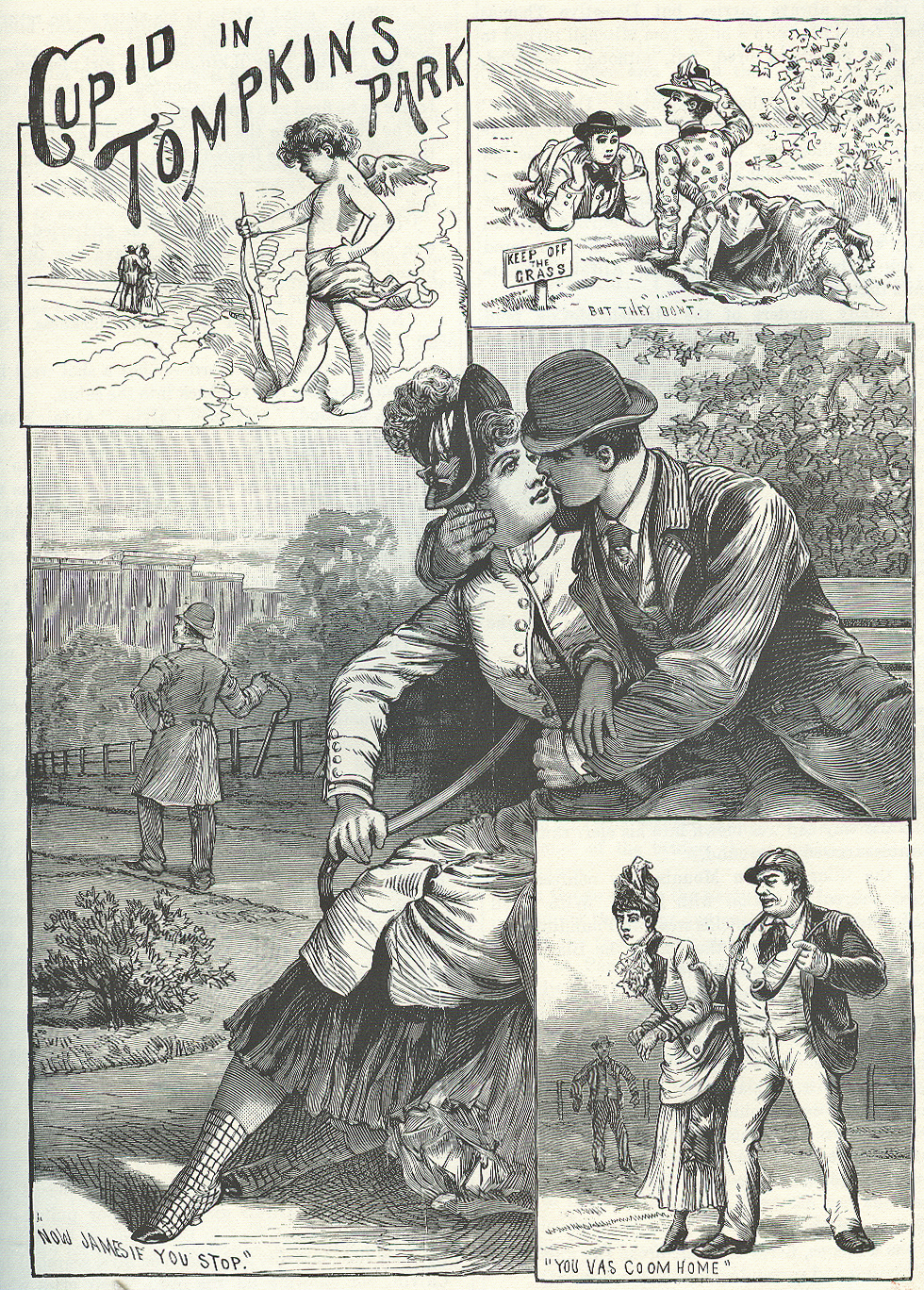 New York, New York, 1888 - Sparking in Tompkins Square, a place which Cupid has made his favorite stomping ground, and where the stern paterfamilias is wont to appear.

Cupid has had great sport in Tompkins Park, this city, on pleasant evenings of a Sunday for some time past. Recently the interesting spectacle of forty couples breathing tales of love was witnessed at this charming rendezvous for "spooney" young men and women. Near the circular structure in the center of the park sat a maiden of sixteen or thereabouts, clad in a maroon dress, which just reached to the tops of her buttoned boots, a lavender jacket, and a jaunty hat matching her dress, with a raven's wing in the band.

Close beside her sat a youth of equal age, who was gazing into her eye. He held her hand in his, and in an undertone told her many pretty secrets.

Changing her hand to his other one, his arm gently stole round her waist. She seemed unconscious of it. He whispered something and she shyly looked at him, presumably the better to understand his whisper. He inclined his face to hers and "just one" he pleaded-and hastily took one, two, three. He paused a few seconds in admiration of her and then resumed talking, and she talked, too, in a bashful way.

But presently a very substantial vision intruded itself upon their happiness-a tall, ponderous Dutchman in trousers of ample volume, a jean jumper and a velveteen cap similar to those worn by the drivers of brewery wagons.

Another young couple plumped down. The Fellow manifested his affection by pulling his sweetheart's hair and pinching her ears. She tee-hee-hee'd, slapped him playfully, and twittered, "Now, Jamesie, you stop." But just the same she didn't seem pleased when Jamesie did stop. She slapped him some more; whereat Jumesie pushed hack her head and gave her a loud kiss.

With all the couples the time was fraught with happiness and sweetness and most of them didn't leave the park until the broad-faced clock in the steeple of St. Bridget's Church nearby tolled the hour of ten.