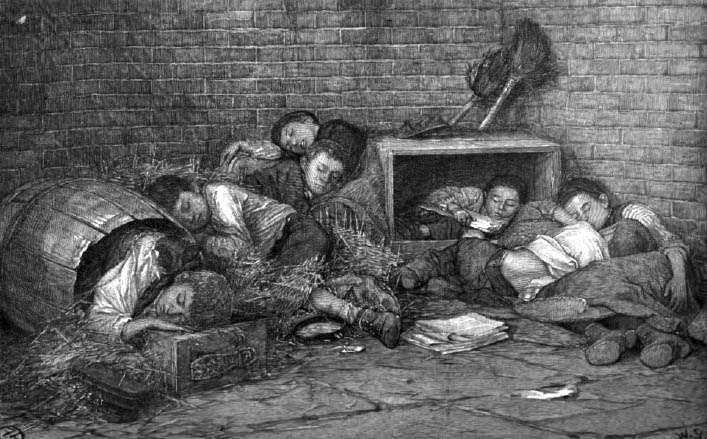 The rapid population expansion of New York City in the years following the Civil War was accompanied by an equally rapid expansion of in the population of homeless boys sleeping in alleys and living hand-to-mouth on the city streets. Sometimes taking to the streets to escape abusive fathers, sometimes abandoned by unwed mothers, the waifs had no family connections and no identities beyond the nicknames they gave each other. Though tough and ruggedly independent, to a great extent they survived by taking care of each other.

There were two classes of homeless boys – “street arabs” and “gutter-snipes.” Street arabs were the older, stronger boys. Sturdy and self-reliant, they were always ready to fight for what was theirs, and ready, as well, to fight for the weaker gutter-snipes who looked to them for protection. Gutter-snipes were younger boys—sometimes as young as four or five—brutalized by abusive parents and left to the dangers of the street until they find the protection of an older boy. In time the gutter-snipe would harden into a full-fledged arab with snipes of his own. 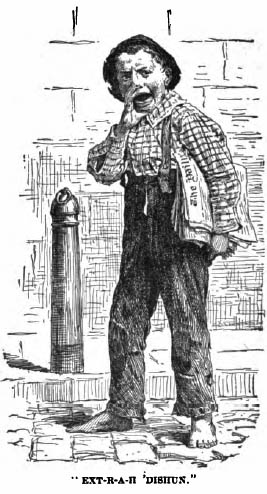 The most enterprising of these boys—both street arabs and gutter-snipes—became newsboys hawking the many competitive daily newspapers sold on the streets of the city. Being a newsie required a considerable amount of self-discipline. A newsie had to wake before dawn and arrive at the newspaper with enough money in his pocket to pay for the papers he would be hawking throughout the day. During the regular course of business, they respected each other’s turf and would not interfere with another boys clientele. But a fire, a brawl or any other event that drew a crowd would also draw newsboys competing directly with each other.

A number of societies and agencies were established to aid the homeless boys of New York but the boys were extremely independent and suspicious of handouts. Better to sleep outside than to risk being trapped and taken the House of Refuge. The most successful aid organization was the Newsboy’s Lodging House which offered a bed and bath for six cents a night and a hot supper for four cents. Skeptical at first, the boys came to view the Lodging House as their hotel. Rules were minimal, a gymnasium was available for their use, and reading lessons were provided for those interested.

But even with affordable lodging, many of the boys preferred sleeping outside. They were avid theatre goers and given the choice between a warm bed and a ticket to a play or vaudeville show were likely to choose the latter. Alcohol, gambling and the rest of the urban vices worked to drive the older boys from the straight and narrow.  Though the Newsboy’s Lodging House could boast of many triumphs, including homeless boys who went on to graduate from great universities, more often the lessons learned on the street prepared the boys for the fastest growing occupation in the city— crime.