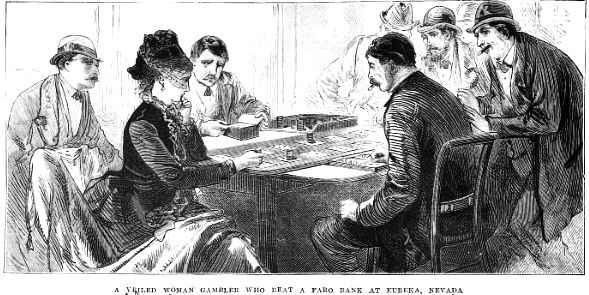 Dropping Their Disguise. | A Way Out of the Sunday Difficulty.

At Eureka, Nevada, about three weeks ago, the monotony of life in one of the faro-banks of the town was relieved about midnight by the advent of a woman, closely veiled, accompanied by an escort. Her presence of course excited considerable curiosity, and the game—faro—was temporarily interrupted, the players and dealers taking more than ordinary interest in the newcomer. They recovered their composure, however, on failing to penetrate her veil, and continued their game, keeping a good watch, though, lest she might draw some instrument from under the ample folds of her dress and castigate or scatter the crowd from their wrestle with the tiger.

A number thought she was an outraged wife in search of her husband, whose absence she had mourned and whom she wanted to catch at the green table. All conjectures were, however, soon dispelled. The case-keeper had risen from his seat and turned in his checks, when the fair incognito deliberately planted herself in his chair, opened the case-keeper, piled up several twenty-dollar rolls of silver alongside of it, and appeared ready for business. All eyes were turned upon her, and Purdy's nimble fingers trembled perceptibly. A slight paleness was noticeable in the dealer's face, but like the hoy who stood upon the burning deck, he was bound to stand it, win or lose. Luck favored the fair stranger, and from white cheeks she turned to red, and the red resolved themselves into blue ($25 each). She kept the cases carefully and played with all the pluck of an old hand at the business. She won and lost, but kept gathering in the blue checks. Finally, when she was a couple of hundred ahead, she handed them to the dealer and received her eagles in exchange, and, with her escort, left the room and disappeared from view. The eyes of the boys stuck out like bung-holes on a molasses barrel, aid they looked at each other in perfect bewilderment. They were mystified by the fair stranger beyond conception, and it was some time before the game was resumed. Who she was no one knew, but they would give something to find out.