Eloped on a Spotted Steer.

How a loving West Virginia couple escaped from an obdurate father and were married.
More...
January 30, 2017

Freaks of Fashion. | Thrown from a Balcony.

Eloped on a Spotted Steer. 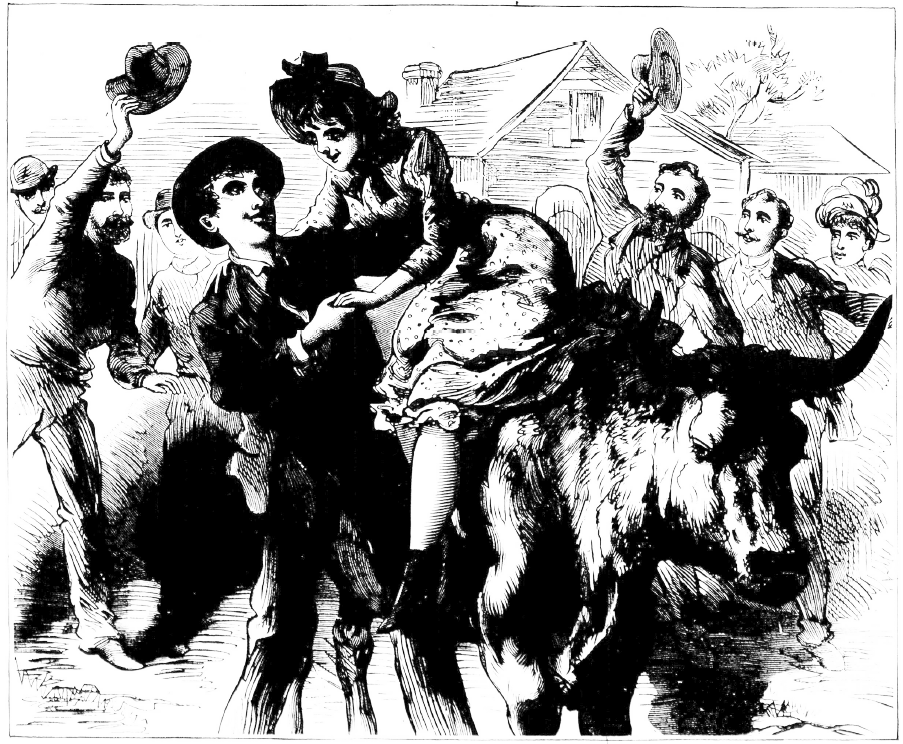 How a loving West Virginia couple escaped from an obdurate father and were married. [more]

On last Thursday morning a young couple appeared in Welch, McDowell County, W. Va. They were Miss Carrie Coats, a pretty, peachy-cheeked country damsel of 17, and Sandy Johnson, a tall, stalwart, good-looking mountaineer, of 22 years. They had travelled all night from the bride’s home on Ground Hog Cree, in order to elude the obdurate father of the girl. The girl was riding on the back of a dignified spotted steer, and sandy was walking by her side. The unusual sight soon drew a crowd of people, and as everybody loves a lover, half a dozen hurried off after a magistrate or a preacher. Unluckily for the lovers, no official could be found who would marry them on account of the girl’s age. When the couple learned of this they broke down and cried, the girl sobbing as if nearly heartbroken.

The tears of the pretty young girl brought about a determination on the part of the spectators to see them through in some way, and one suggested that thy take the train, then nearly due, for Bristol, Tenn. Where they would find no difficulty in getting married. The proposition changed the tears of the bride into smiles of joy and Sandy’s less apparent grief into open-mouthed delight for a moment, until he thought about a license. Someone in the crowed, however, anticipated the young man, and proposed that the crowd pay all expenses, and in less time than ti takes to write it pocketbooks were out and enough money was contributed to carry the couple through, with a souvenir left over for the bride.

The spotted steer was stalled in front of a pile of oats and corn to ruminate in peace and plenty until the return of the couple and the procession headed for the platform. Neither of the couple had ever seen a train before, and when it pulled in they got on the platform between the engine and the baggage care. Their sponsors soon remedied this mistake and had them conducted into a ladies’ car, where the conductor was expressly charged to see them safely through. The last seen of Carrie and Sandy as the train was wheeling out of sight, they were folded in each other’s arms laughing and straining their eyes as they looked out of the window.