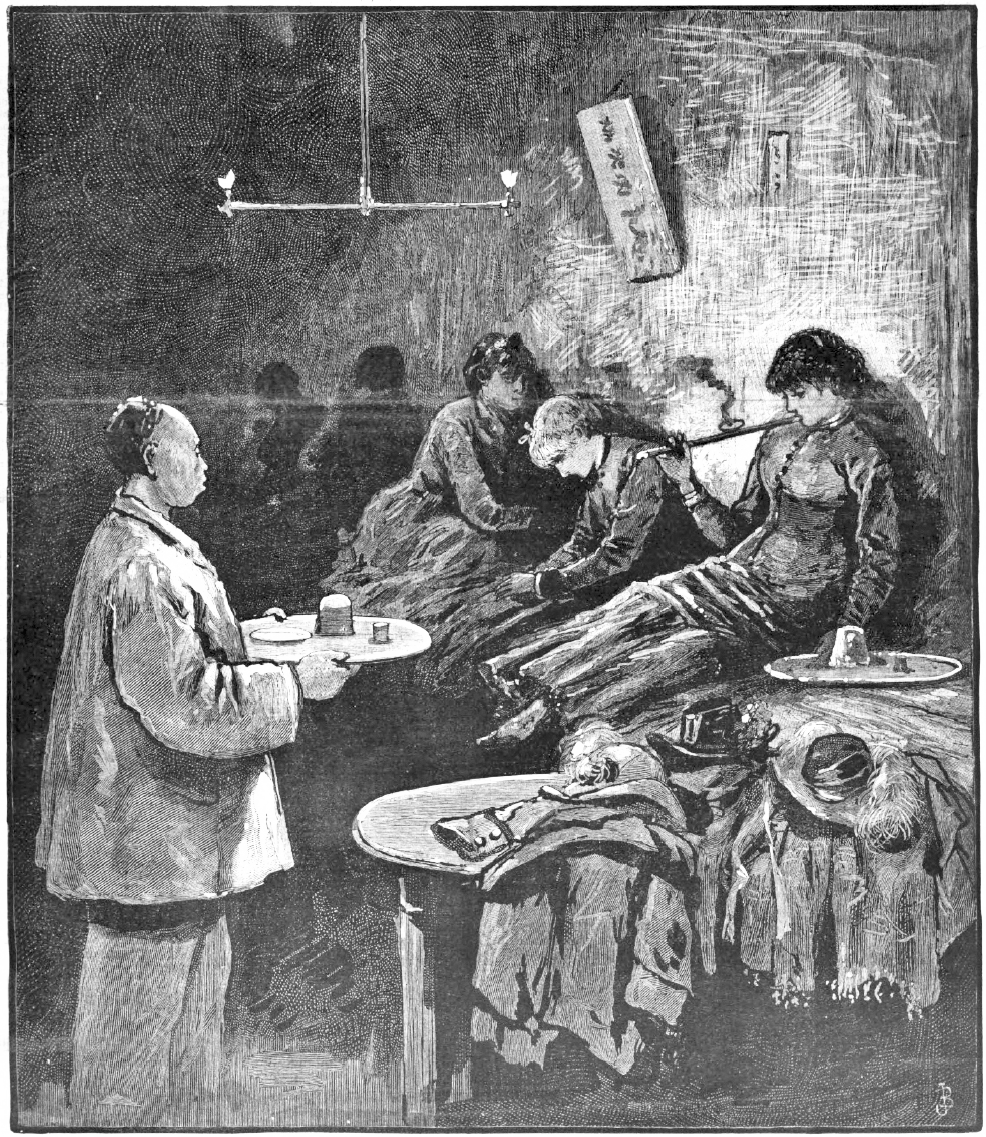 A Growing Metropolitan Evil.—Scene in an opium den in Pell Street, frequented by working–girls. [more]

How Young Girls Become Victims of the Dreamy Drug.

“What makes you tremble so?” “Opium-smoking.” “How long have you been so”” “Three or four years, sir. Those Chinamen give girls opium in candy and all sorts of things, until we can’t do without it. I have to go every day to smoke. I got into trouble with Mrs. Ching King because I saw her dosing children.”

Such was the statement made by Emma Pool, a young woman, eighteen years of age, before Justice Kilbreth, in the Tombs Police Court, a few days since.

“That testimony is rather startling if true,” said an artist of Frank Leslie’s Illustrated Newspaper to an officer of the Sixth Precinct, while walking up Mott Street, on the opposite sides of which avenue dwell two discordant factions of Chinadom, headed respectively by Tom Lee and Sam Kee.

“I am inclined to doubt that story about little children being dosed,” replied the officer, “but there’s no denying the fact the opium dens in this neighborhood are frequented by a good many people besides Chinese. You’d scarcely expect to find women and young girls visiting such places, but they do.”

“What kind of women and girls?”

“Well, the kind that—that you see mostly about this neighborhood. Two or three years ago it was no uncommon thing to see carriages form up-town stop in these out-of-the-way lanes and alleys, and richly-dressed ladies, in thick fails, alight at some dingy rookery known to everybody hereabouts as an opium resort. But that is all done away with—that is to say, such people do their smoking up-town nowadays. Come along, and you can have a peep at the inside of some of these places, thought I don’t know that you’ll be able to see anything out of the common at this time of day.”

We turned up Pell Street, a narrow, squalid, disreputable lane between Chatham Square and Mott Street. The dirty strip of sidewalk, choked up with garbage, was thronged with Chinese and Italians, as low and ferocious-looking types of humanity as one would care to meet, even in daytime.

A laundry and a Chinese grocery store were first visited, but the occupants were discovered innocently eating boiled rice with red chop-sticks, which was not what we had “come out for to see.”

Presently we entered a low, dingy doorway, over which swung a green sign, bordered with scarlet, and bearing a Chinese inscription in gilt characters. A wrinkled old Chinaman conducted us through a bare, dark passageway to an inner apartment. A door suddenly opened, and disclosed as scene which more than realizes any preconceived idea of a Chinese opium den, whether drawn from picture, description, or a disordered imagination.

One pale shaft of sunlight, entering through a small window, dimly illuminated a narrow room, the walls of which were decorated in a semi-barbaric manner with vases, colored prints, mirrors and Chinese inscriptions. Along one side of this apartment extended two broad shelves, or divans, the upper about six feet above the floor, the lower less than two feet high. These were covered with bamboo matting, and on the side next to the wall were provided a low ridge or pillow—for upon these “bunks” the opium-smoker reclines whilst inhaling the drowsy fumes, and perhaps vainly courting those luxurious languors of which DeQuincy wrote. A peculiar, sickening order pervaded the place.

Our eyes having adapted themselves to the glimmering dusk, we peered through a vail of blue smoke down into the further end o the den. There reclined four or five young women, of good appearance, though rather flashily dressed, each holding over the flicker flame of a lamp the clumsy bamboo opium-pipe, which a Chinese attendant from time to time replenished by means a of a knitting-needle, with which a morsel of the drug was dipped for a tiny box and punched into the tiny aperture of the read earthen bowl. A few puffs would exhaust the supply, when another “dip: would be furnished. All of the unfortunate creatures seemed more or less under the spell of the intoxicating fumes. In one or two instances the eyes were close, and the flushed faces wore a vacant, dreamy smile. Some of the girls chatted in languid murmurs, and one, having shaken off the opium spell, had arisen form the matting, and in a dazed way was arranging her hat before a looking-glass, preparatory to quitting the place.

The mysterious gloom, the flickering opium-lamps, the barbaric colors on the walls, the trace-like appearance of the smokers, and the deathly stillness, scarce broken save by the sickening gurgle of the pipe—all contributed to make the scene a weird and impressive one, which fascinated even while it disgusted the unaccustomed gaze.

The old Chinaman muttered ominously as the artist began dashing of a rough sketch on a apiece of loose paper; and, taking one more survey of the den, we went out form the ghastly gloom and reeking atmosphere into the now strangely brilliant light of day, and in five minutes found ourselves in busy Printing-house Square, mingling again with that civilized half of the world which knows not, nor could ever dream, how the other half lives.