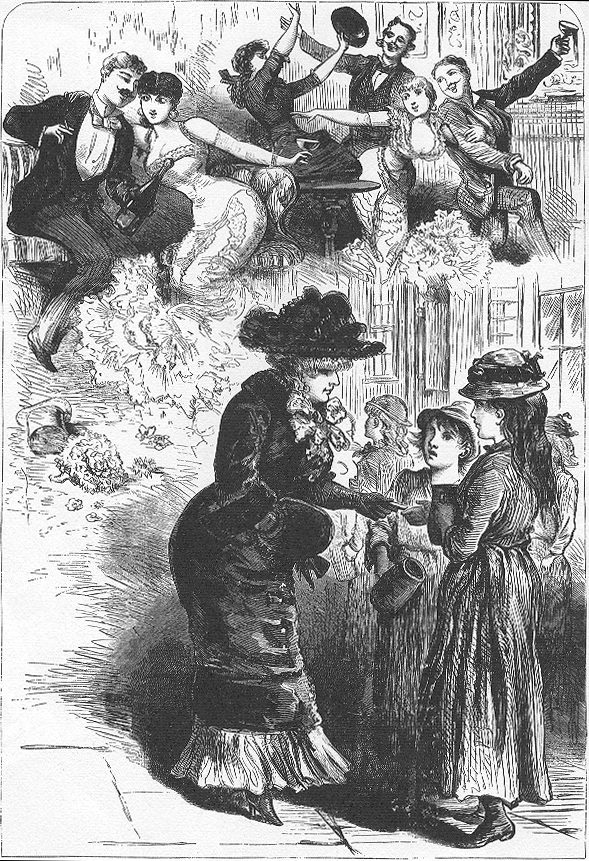 New York, New York, 1882 – Tempting to Ruin! How Gotham’s Palaces of sin are garrisoned out of the hovels. The gaudy spider spreading her webs for the flies who make her loathsome trade profitable.[more]

A portly female arrayed in a sealskin dolman to her heels and with her blonde wig topped with a Gainsborough hat, descended from the elevated road at the United States Hotel, this city, recently. In the hallway she met another female who might have been her twin sister as far as costume went. The pair exchanged a profusive greeting, and the fine carat solitaires in their ears radiated a blaze of splendor as their heads bobbed together in the regulation kiss. It would have been evident to an experienced eye that the authors of these amenities belonged to a class more familiar to the police court than the prayer meeting and the glories of the attire they flaunted bore the taint of shame.

One of the women consulted a watch encrusted with diamonds and led the way to the street. They crossed Fulton Street, where one halted at the corner. The other passed on to the opposite side of Water Street, where she likewise halted. The passers-by cast curious glances at them but they did not flinch. They held their posts with the air of having a reason for doing so.

In a few minutes the shrill voices of many whistles announced that it was twelve o'clock. From the doorway of a tobacco factory near by a couple of girls came out. They went into a neighboring coffee and cake shop, passing one of the waiting women, who eyed them closely. They were ordinary-looking girls, in the shabby brown-stained attire of tobacco strippers. After them appeared a very pretty girl of perhaps sixteen years, who had a touch of coquettishness despite her cheap dress. She passed the second woman, who addressed a remark to her. The girl started, and the woman put a card into her hand, which she slipped into her pocket as she hurried away.

By this time the girls were pouring out of the factory in a steady stream. With a number of them, always the best-looking, it was to be seen that the woman repeated the performance already described. At half past twelve the two women went away up Fulton Street, leaving the girls gathered on steps and in doorways eating their lunches and talking. Several of them were comparing the cards which they had received.

A Police Gazette reporter who had observed all approached one of these groups and after considerable persuasion induced a pretty German girl to exhibit her pasteboard to him. It bore the address of one of the most noted procuresses on Twenty-seventh Street.

"Do you know what that card means?" asked the reporter.

"The lady asked me to come and see her," replied the girl after a moment's hesitation.

"What did she say to you?" "She said," replied the girl slowly and with her eyes on the sidewalk, "that I ought to be doing better than stripping tobacco for a living and if I came to her she would show me how."

"And do you know what she means?"

The girl cast a stealthy glance at her questioner and began to cry. Several of her companions gathered around her and took her away, assailing the scribe in vigorous words and intimating that he had better mind his own business. The policeman at the corner, coming up to the Police Gazette representative, said:

"Have you been giving the girls a steer about the madams? I thought so. Why, they nearly blackguarded the buttons off my coat the other day because I wanted 'em not to have anything more to do with those women. It's an outrage. The women have been coming down here about once a week these three months or so, and every time they come you find a couple of the girls leaving the factory. There was a girl last summer, one of the prettiest little things you ever saw. Her brother works in the market. She was the first one them women pitched on, and her brother told me yesterday that she's in a place uptown and won't come home. Every now and then one of the girls comes down here all rigged out in sealskins and diamonds and then there's a flutter among the other girls and one or two of them disappear. The women you have noticed pick out tobacco factories because the girls who work in them are numerous enough to pick and choose from and because the business itself is an unpleasant one and any girl employed in it is glad to get the chance to better herself even if it brings ultimate ruin on her. They take one of the girls from here whom they have gotten into their clutches, dress her up, cover her with diamonds, fill her half full of champagne and give her money to treat her former fellow workers with, and send her down here and she does more harm than they themselves can do, for she can poison the mind of any girl she gets hold of."