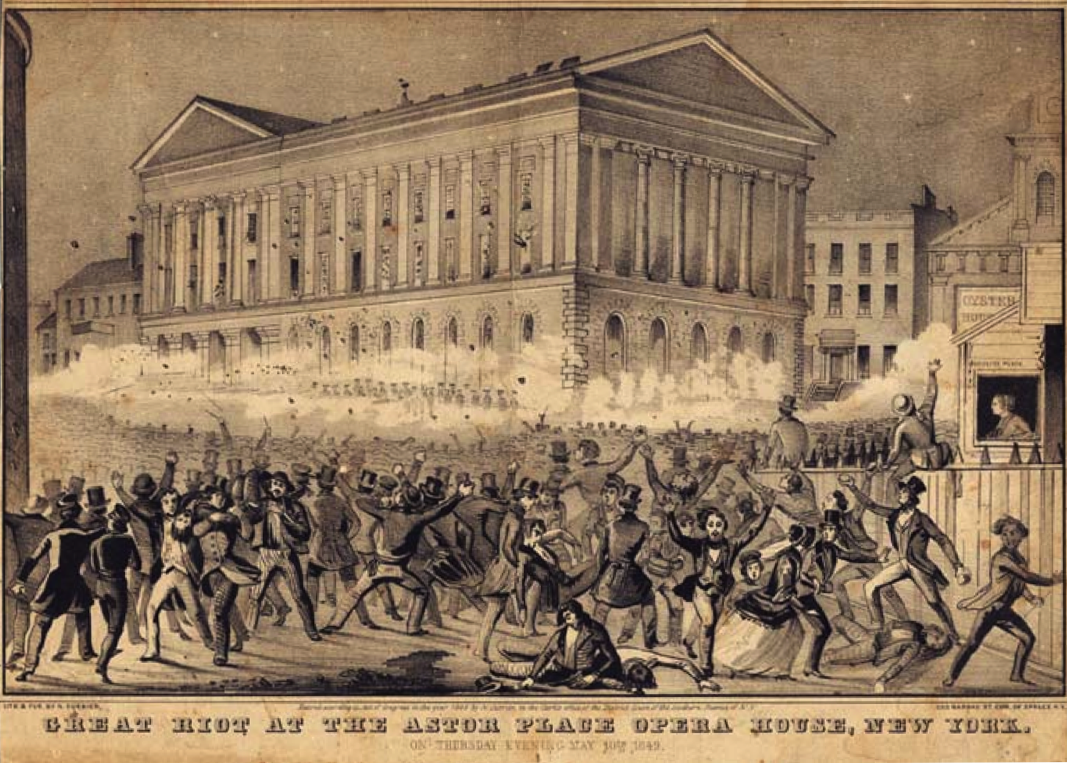 New York, New York, May 10, 1849 - The night of May 10, 1849, New York City experienced the largest public disturbance it had seen to date. The Astor Place Riot left at least 25 people dead and 120 more injured. What was the burning issue that led to this night of carnage? It was the question of, who was the better Shakespearean actor: England’s William Charles Macready, or America’s Edwin Forrest. 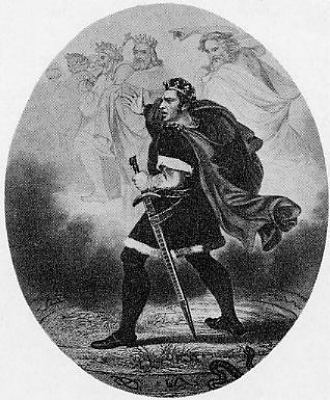 Americans had always had a strong affinity for Shakespeare.  Settlers travelling west always took a King James Bible; if they had a second book it was, more often than not, the works of Shakespeare. Though the theatre was a much rowdier place than today—alcohol and prostitutions a given—when Americans went to the theatre, they wanted Shakespeare.  When Pennsylvania born, Edwin Forrest, emerged as talented Shakespearean actor, American theatregoers were ecstatic.  Here was an actor who not only played Shakespeare, but looked and acted like an American.  Strong, handsome, and athletic, Forest played the familiar roles, with a forceful style that resonated with American audiences wherever he went. Edwin Forrest was the first American star 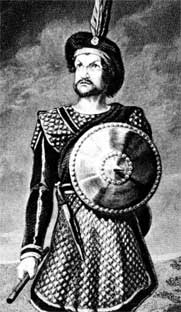 On his first trip to England, Forrest’s acting style was well received there too. While in England, Forrest met and became friends with William Charles Macready, that country’s foremost Shakespearean actor. While the two men developed a warm friendship, privately, neither had anything positive about the other’s acting.

When Macready came to America, Forrest followed him from city to city, performing the same play, inviting comparison. Forrest thought of it as friendly rivalry, but Macready did not take it that way.  When Forrest toured England again, he was not as well received and he blamed Macready’s influence. In London, Forrest went to see Macready perform Hamlet, and, allegedly, hissed him loudly from the first row.

In 1849, Macready opened another American tour by performing Macbeth at New York’s Astor Place Opera House, while Forrest was playing the same role a few blocks away at the Broadway Theater. This caught the attention of the gangs of New York who, in 1849, had more power than respectable people were willing to admit.

The gangs in the Bowery and Five Points neighborhoods were involved in theft in all its forms, prostitution, blackmail, extortion; and they provided muscle for various political factions. But more than anything else, the gangs loved to fight. Under normal circumstances, the Irish gangs would fight each other—e.g. The Dead Rabbits would fight the Plug Uglies, who would fight the Roach Guards, etc. But when challenged by their arch enemies, the nativist—anti-immigrant—Bowery Boys, all of the Irish gangs would fight together. On rare occasions, when the conflict was downtown versus aristocratic uptown, or England versus America, all of the gangs would fight together. Macready’s performance provided just such an occasion.

During Macready’s first performance at the Astor Place, the gangs bought up hundreds of tickets and filled the theatre with rude boys (pronounced b’hoys.)  When Macready stepped on stage, they booed and hissed, pelting him with eggs, rotten fruit, and other garbage, until Macready left the stage. He decided to cancel his tour, then and there, and return to England, but New York’s literary elite, including Washington Irving, persuaded him to perform again. 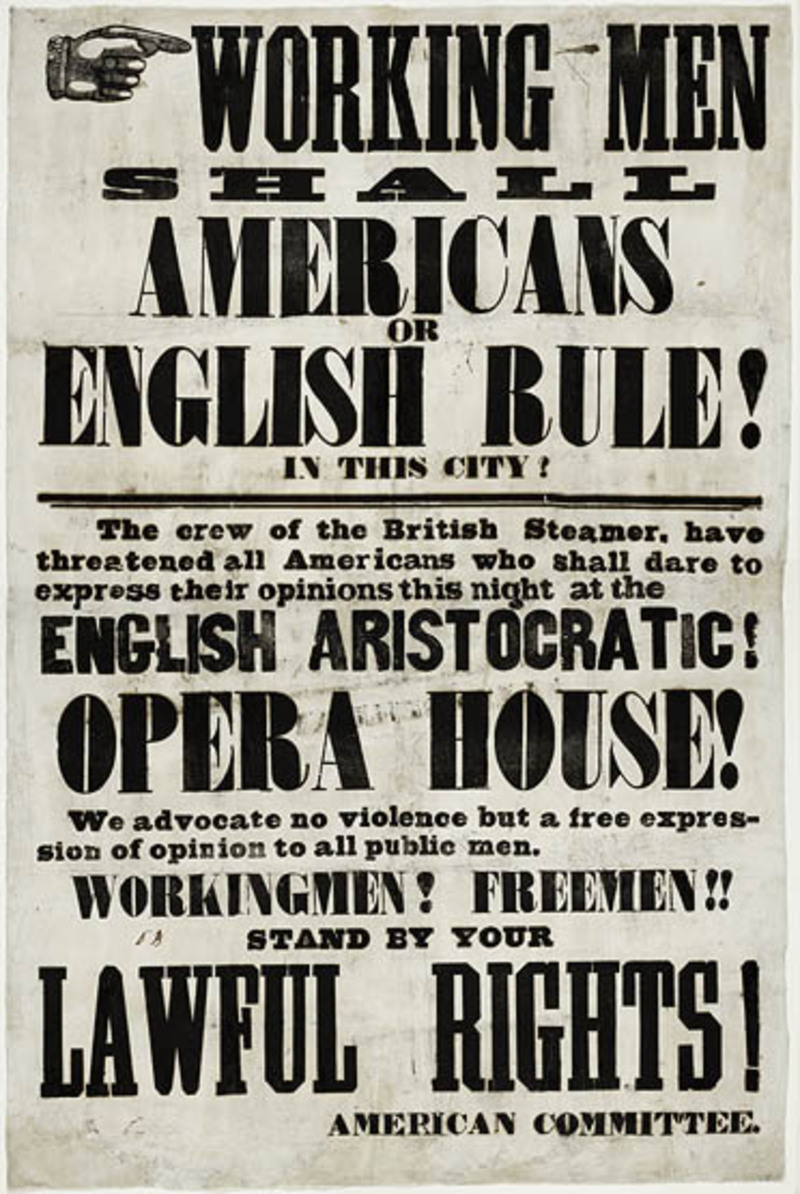 This riled the gangs even more. They were now led by the instigation of nativist journalist and dime novel author Ned Buntline, and Tammany Hall boss, Isaiah Rynders, who was anxious to embarrass the newly elected Whig mayor, Caleb S. Woodhull. They covered the city with fliers calling on workingmen to oppose English rule in New York City.

Three nights after the first performance, the theatre was again filled with gang members, threatening to disrupt the performance, but it was also filled with policemen who managed to quell the rowdies enough for Macready to finish the show. However, outside the theatre, a crowd of 10,000 people had amassed and were hurling bricks and rocks at the building. It was too much for the police, the mayor sent for the state militia –two companies of infantry, a light artillery troop, and forty cavalry men.

The troops fired above the crowd and when that produced no results, they fired into the crowd. When the smoke cleared hours later, 25 men were dead and more than a 120 wounded. Macready, barely escaping with his life, managed to board a train to Boston.

Both Forrest and Macready continued acting but their paths never crossed again. Neither man was ever again able to generate the passionate response of that night in 1849.