Faahee, or surf-swimming, is a favorite pastime with the natives of the Sandwich Islands.
More...
April 21, 2015

Said She Would and Did. | Society Women Turn Burglars. 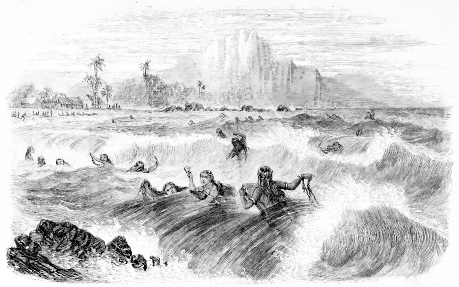 Faahee, or surf-swimming, is a favorite pastime with the natives of the Sandwich Islands. According to Ellis, a recent writer, “Individuals of all ranks and ages, and both sexes, follow this sport with great avidity. They usually select the openings in the reefs or entrances of some of the hays, where the long, heavy billows rolled in unbroken majesty upon the reef or the shore. They used a small board, which they called papa faahee—swam from the beach to a considerable distance, sometimes nearly a mile—watched the swell of the wave, and when it reached them, they mounted on its summit, and amid the foam and spray rode on the crest of the wave to the shore; sometimes they halted among the coral rocks, over which the waves broke in splendid confusion. When they approached the shore, they slid off the board, which they grasped in the hand, and either fell behind the wave or plunged toward the deep and allowed it to pass over their heads.

“Sometimes they were thrown with violence upon beach, or among the rocks on the edges of the reef. So much at home, however, do they feel in the water, that it is seldom any accident occurs.

“I have often seen among the border of the reef, forming the boundary line to the harbor of Fare in Huahine, from 50 to 100 persons, of all ages, sporting like so many porpoises in the surf that has been rolling with foam and violence toward the land; sometimes mounted on top of the wave, and almost enveloped in spray, at other times plunging beneath the mass of water that has swept like mountains over them, cheering and animating each other ;and by the noise and shouting they made, rendering the roar of the sea and the dashing of the surf comparatively imperceptible.”