The Drama of Life,

The Drama of Life, 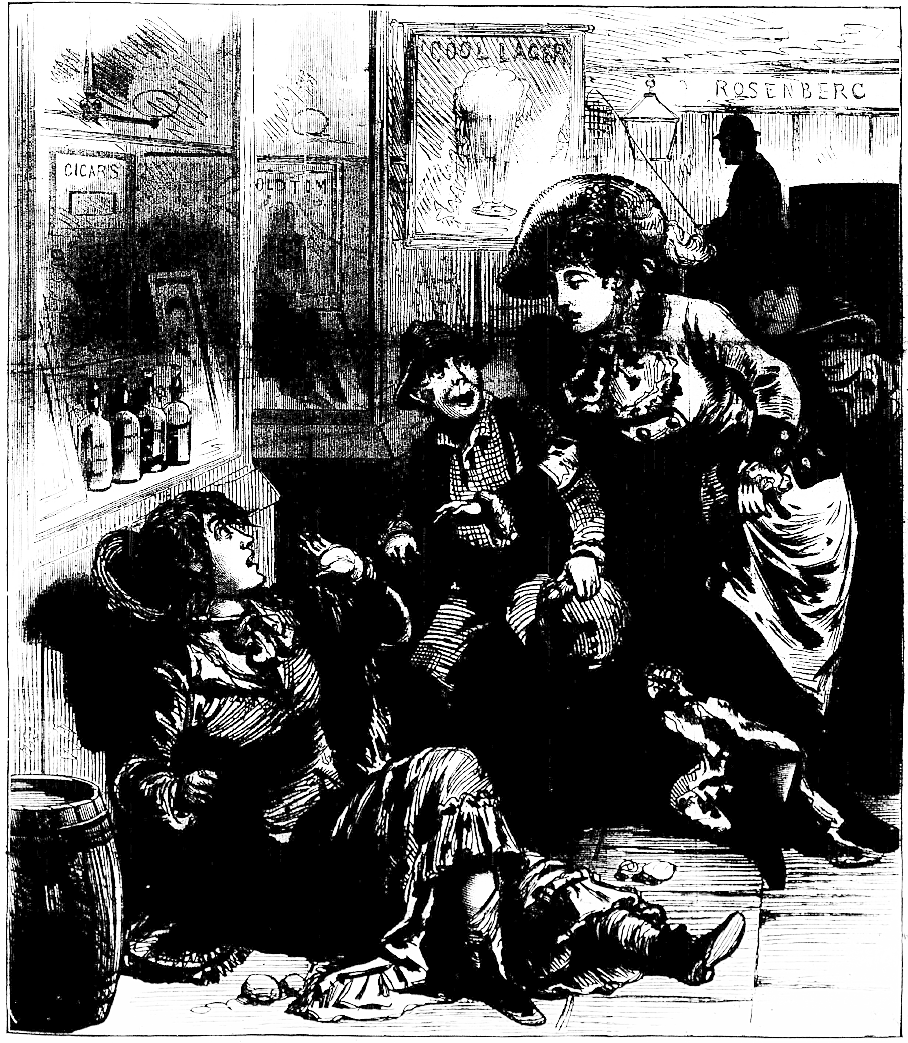 Whose Strangest Tableau Was Played on the Bowery Sidewalk—The Chance Which Reunited Two Sister and Spoiled a Juvenile Target Party. [more]

There was a mob of urchins assembled in front of a Bowery groggery the other afternoon as a Gazette reporter traveled up town. They were filling the air with those hideous noises only boys and girls who go to school in the gutter, and are brought up by hand, with a club in it, know how to produce.

They were also loading the atmosphere with a miscellaneous assortment of missiles, comprising pretty nearly everything capable of being thrown, form a gob of mud or a putrid orange to the corpse of a cat which had tried to stop the wheels of some wagon and made a bad failure of it.

The object of these attentions was a woman.

She was a wretched, tattered, bloated, battered wreck, staggering even as she leaned against the wall with the fumes of the liquid poison she had been imbibing mounting into her brain.

She yet presented some traces of feminine beauty in her puffed and swollen face. Her eyes, bleared and bloodshot, were still large and shaded by ling silken lashes. Her skin, even under the grime that coated it, fine of texture. The unsteady had with which she strove to ward off the fusillade she was being made the target of, though unlashed and blackened, was as small and taper-fingered as the finest lady’s

There clung to all the shameful distortions of her womanhood, in fact, a subtle suggestion of some better past that an observant eye could not fail to discover.

The Gazette reporter had just insinuated to a red-headed boy with a decayed head of cabbage in his hand the he could find a better use for it than throwing it at a drunken woman, and the youth was rubbing the part that hurt him the most saying naughty words about the reporter, when there was a rustle of silken skirts and a voice cried sharply:

“You little wretches! How dare you! Stop at once or I’ll have you all arrested!”

In a moment more the outcast had staggered forward and was folded in her happier sister’s arms, with her foul rages sullying her skirts and her bruised face hidden on her bosom. Even the gutter brats looked on in awestruck quiet, and then the lady said sharply, “call a hack, somebody.”

The first to start at full speed, yelling after a passing coach was the red-headed boy, who had forgotten his injuries all at once, while a string of his comrades followed him, rending the air with shouts that made the hackman pull up with a suddenness that almost jerked his horse over his head. Before the crowd which had gathered with the suddenness that characterizes a street mob had really commenced to wonder what it was about, the coach door had slammed upon the strangely contrasted figures and the vehicle whirled away.

Five minutes later the tide of life that ebbs and flows in the great thoroughfare of the east side was in full progress again, little dreaming of the drama of real life whose strangest tableau had just been enacted on the busy pave.