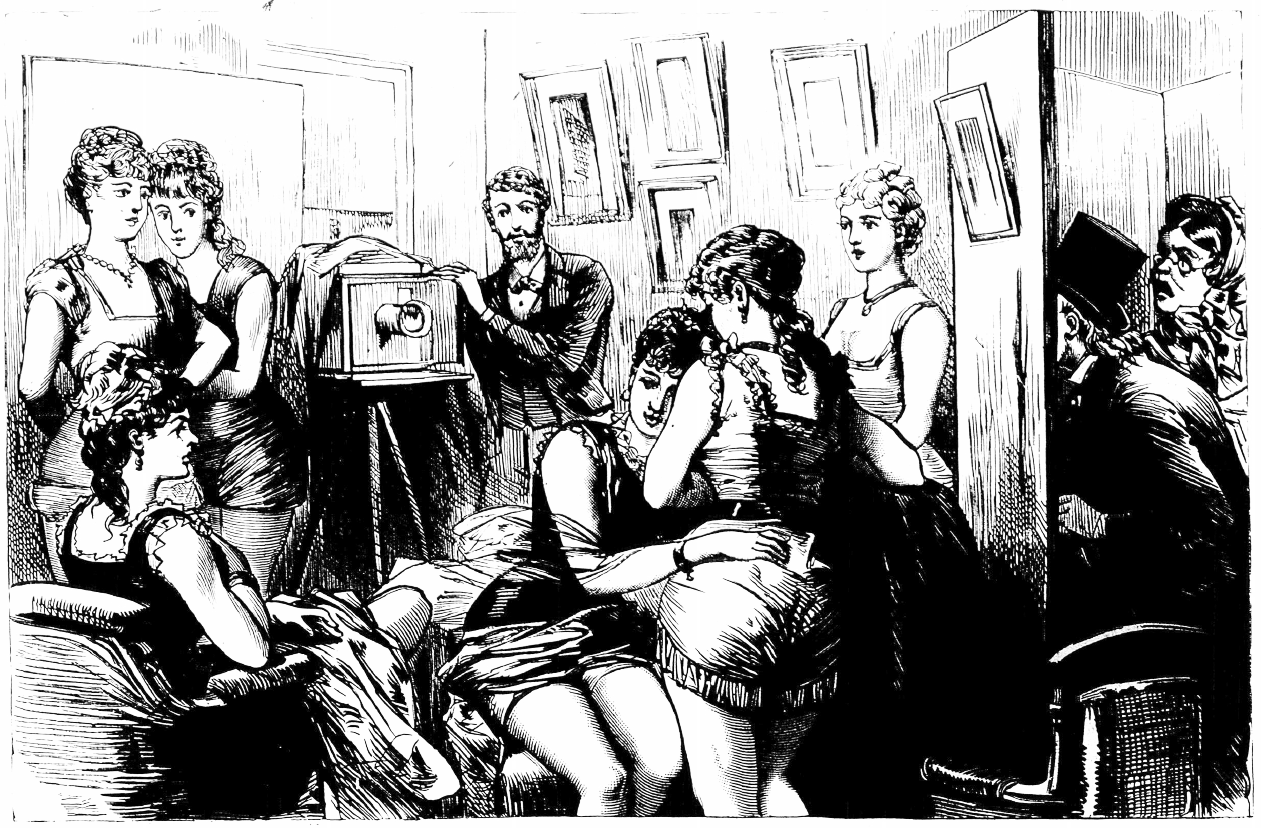 The National Night Stick has previously reported on a group of a society girls who scandalized Boston by posing naked for a local photographer. A little further digging revealed that this was not an isolated incident, but just the most notorious case of what was, in the 1880s, a national trend. Said one reporter in 1888, “The latest fad, or rather ‘craze’ (for nothing in the long list of fashion’s freaks has ever shown such a total and meaningless disregard of the social proprieties), is photographing ‘in the nude.’”

Usually the pictures remained a secret between the girls and their close friends, but when the secret was uncovered it always raised a scandal. In 1882 a group of nine society girls of Wheeling, West Virginia, between the ages of fifteen and eighteen, who “…mourned that the greater part of their beauties must be concealed from the gaze of their friends” visited a photographer to remedy the situation. They did not pose totally naked; they brought with them three yards of gauze and their nudity “was beautifully dimmed but not hidden by the netting.” When the session was over each girl left with a small package of cartes de visite, displaying their charms.

They discretely handed out the cards to their friends but the situation did not remain discrete for long. Wheeling was scandalized. As would later happen in Boston, the girls were unrepentant and the blame was laid on the photographer.

In 1888 anti-vice crusader, Anthony Comstock seized a large number of “glaringly and shockingly improper pictures” from an amateur photographer in Brooklyn named Brown. The subjects of many of these pictures were “young ladies of previously unimpeached respectability, moving in Brooklyn’s best society.” Brown told contradictory stories on how he obtained them.

This time the girls denied everything saying the pictures must have been altered, putting their heads on other bodies. This trick had been tried unsuccessfully in London when a photographer was arrested for putting the head of actress Mary Anderson on an obscene body. Photography expert T. C. Roche said that without a collar or necklace to hide the splice line, the sham would be easily detectable. “[not] any trick invented will enable a rascal to make an indecent picture of a girl without her complicity.”

At the same time as the nude photography fad, Anthony Comstock’s war on vice had become so invasive that a photographer in San Francisco was arrested for having a nude picture of his baby boy. Photographers did not put their names on nude photographs and most would not admit to taking them. All who were interviewed, though, claimed that women were constantly asking to be photographed in some degree of nudity.

Those who did admit it told quite a story. One New York photographer in 1888 estimated that 8000 nudes had been taken in the previous eighteen months, “Of these one-half have been girls and women who belong to what is called respectable society; the other half have belonged to the legion of the lost.” The Wheeling photographer said this about his high society subjects, “…you couldn’t have an idea of how beautiful they are till they’re stripped. Very ordinary society ladies have surprised me when they’ve stood before me in a state of nudity by the unsuspected beauties they possess.”

If any of these high society nude photographs have survived into the twenty-first century we will probably never know. Without clothing it is hard to tell who is in society and who is in the “legion of the lost.”